Random statements about Motörhead and me 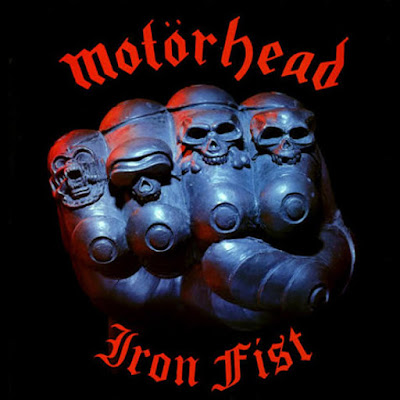 My first Motörhead album was Iron Fist, consumed at age 14 in the very year of its release, 1982, played to me by a friend on his bedroom record player in Maple Ridge (same guy who turned me onto the Sex Pistols!). When I decided being a punk meant not listening to metal anymore, I got rid of my Priest and Maiden and AC/DC, but I think I have had a copy of Iron Fist, in one format or another, in my collection since that time.

My favourite songs on that first-ever Motörhead album: "America," "I'm the Doctor," "(Don't Let 'Em) Grind You Down," "Loser," "(Don't Need) Religion," plus the title track. I listened to the album in full on Sunday, in fact - back when Lemmy was still with us - mostly because I momentarily couldn't find Another Perfect Day, which I'd been hankering for, and made do. It was easy, because I still love Iron Fist, all these years later.  Lemmy told me in an interview that he was less fond of this album because there were songs on it that he hadn't wanted to appear on it, that it was kinda taken out of his hands. Foolishly, I didn't ask him which those songs were! I actually love this album way more than Ace of Spades....

Favourite early-period Motörhead song not on the first album of theirs I heard: "Stone Dead Forever." Tho' the live version of "(We Are) The Road Crew" goes a long way, too. And their self-titled theme song, but good luck sorting that out on Youtube.

Favourite Motörhead ballad: "Ain't No Nice Guy" (with Ozzy or without, both have merits).

Last Motörhead album purchased before I stopped following the band,  back in the day: Orgasmatron (1986). It's got a few great songs - "Claw," "Deaf Forever"- but Bill Laswell's production is, I think everyone kind of agreed, at the very least a bit weird, and a bunch of the songs just didn't engage me ("Dr. Rock," say: never really dug that one). I'd liked Another Perfect Day well enough - a contentious album for some, but not me - but Orgasmatron was the one that threw me, and I didn't listen to another Motörhead album (besides the classics already in my collection) until 2008, had no idea what any of them sounded like, since it's not like you stumble across a lot of their music as you go about your business, besides, of course, "Ace of Spades." Dunno why: I think there are still people out there like that, who loved early Motörhead and then for some reason dropped off the train.

The reason I got back into Motörhead in 2008: they were playing Vancouver, I was writing for the Skinny, and I'd heard from Chris Walter that Kiss of Death was really, really good. Which, I soon discovered, it truly is. Causing me to do a "holy shit, what have I missed" double-take and start playing catchup. Thank God I did!

Now that I've heard them all, my top five Motörhead albums from the period I had ignored (1986-2008), favourite first: Inferno (2004), Bastards (1993), Kiss of Death (2006), Motörizer (2008), and... actually it's impossible to choose between Hammered, We Are Motörhead, Overnight Sensation, Sacrifice, 1916, or even March or Die. I like them all but I don't know them all perfectly, and mostly like one or two songs off each (though I probably listen to Hammered more than the others, so if forced to pick...). I actually wasn't that wild on Aftershock, but I liked what I heard of Bad Magic; haven't done it justice, though.

Favourite song on Kiss of Death (also favourite Motörhead song on religious/ existential themes): "God Was Never On Your Side." What a song.

Favourite warlike Motörhead song about warfare: tie between "Death or Glory" and "When the Eagle Screams."

Favourite Motörhead live moment: I've only seen the band twice, in recent years, but I love that they broke out their acoustic tune, "Whorehouse Blues," as the encore for their 2008, I think it was, Vancouver show. Class act, and what a fun song.

Favourite non-Motörhead Lemmy project is the Sam Gopal album, previously linked. Great psych rock, and the song "Escalator" has a delightful verse that will speak to all the public mourning out there:

And I can feel it
The spring unwinding in my head
And if you think you like me living, baby
You're gonna love me when I'm dead

Okay, maybe not. By the way, on that note, I think I need a new dayjob. Anyone?
Posted by Allan MacInnis at 6:43 AM

Goes to show how subjective music appreciation is. If I stacked up Motörhead records in order of my preference Iron Fist would be right there at the bottom and Orgasmatron near the top. Then again Iron Fist was not the first I'd heard of the band. That would be their first records (lp and 45). The single has my favourite b-side by anybody on it - City Kids.

Motherfucker was talented, persistent and uncompromising. He did his best to die on stage like the similarly inclined Mick Farren. Did not miss the mark by much.

Yeah, though I think most people would agree that that Snake Bite Fever album or whatever it's called is worth a miss (he got sick during the recording of it and though he bounced back it didn't quite make it to the expected level).

But FYI I don't mind Orgasmatron that much now, it's interesting stuff. It was more in 1986 that I didn't dig it.