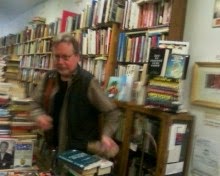 Now and then, I still sit in at Carson Books and Records, located for about one more week at 4275 Dunbar; and many of the people who come through, as the sale goes on, remark on the rapidly approaching closure of the location. It's part of a re-development that will affect several businesses, and see a very long stretch of Dunbar deprived of any bookstore at all, until you get up to 41st and Lawrence Books (a big bookstore, but a very different sort of experience from Tim's shop). Most people who come in wish Tim - pictured left, at his previous location - well. One customer, an articulate chap in a Skinny Puppy shirt, contrasted our city's development-minded indifference to supporting institutions like bookstores with the situation in France, where the government subsidizes them. By comparison, my unconfirmed understanding is that the developers who bought the block on Dunbar in fact got some sort of preferential fast-tracking from the city, so that they could get people out sooner and get their new project - condos or what-have-you - underway. No doubt the unique small retail locations that are being swept away will be replaced by something more generic and corporate...

But to return to customer comments, like I say, most people have been positive (and curious as to why the store is shutting down). "At least you're not closing for good" is a frequent remark - though some customers are vocally disappointed that the store is going to be moving as far away as Main Street. One grandmotherly type quipped in pique that "it's too far to drive all that way," so we weren't going to be getting more business out of her!

The fact is - as I rushed to point out to her - Carson never wanted to close down the Dunbar shop. The neighbourhood has more or less been supporting the business: not like it did when used bookstores didn't have the internet, e-readers and Amazon to compete with, of course, but well enough that Tim fully intended to stay in the location for years longer, had circumstances not changed. You can read about his reasons for moving to Main here, in the Straight interview with him. Meantime, note that this week will be the final week at the Dunbar location. The day after Boxing Day, Tim will be boxing up the books and records that he's keeping and getting ready to take shelves down, to re-open in early January at the Main Street store (next to Red Cat Records, in the former home of They Live Video). The Dunbar location will probably be RIP as early as next Monday. The current discount has been "buy three or more books and get 30% off," but by next weekend, that will intensify considerably, I expect. Records are also on sale (with a 40% discount for multiple purchases).

Anyhow, scavengers: there's still lots of good stuff to be had - both in terms of books and records; in fact, there are some real gems in the vinyl, including rare punk, metal, blues, reggae, folk and jazz. It would be hard to imagine an avid reader or record collector not being able to scrape up a few cool items at the shop (though obviously things have been cherry-picked over the last few weeks, and many of the most in-demand items have already been snatched up, or have been boxed up for shipment to Main Street). There are even a few items I have coveted, like a pretty cool reggae sampler with an atrocious (so-bad-it's-almost-great) cover, but some great music on it. If someone doesn't buy this by next Saturday I will probably feel obliged to give it a good home (I believe the correct songs are on a Youtube playlist here, but it'll sound way better on vinyl...). 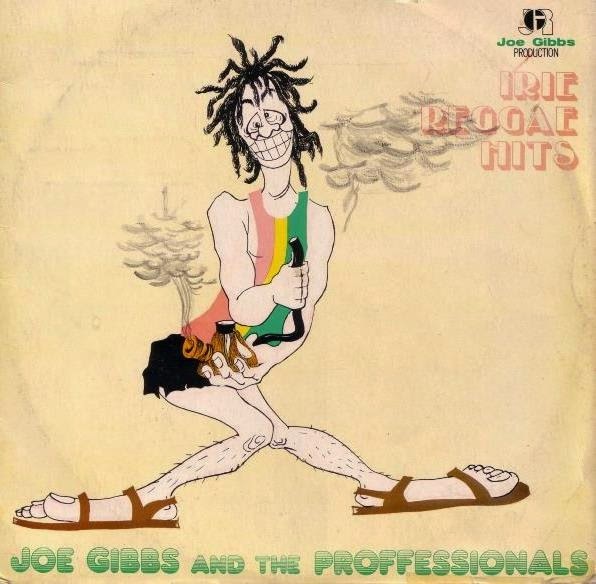 Maybe we'll see you at the store next weekend? I will probably be giving Tim a hand...
Posted by Allan MacInnis at 3:33 AM