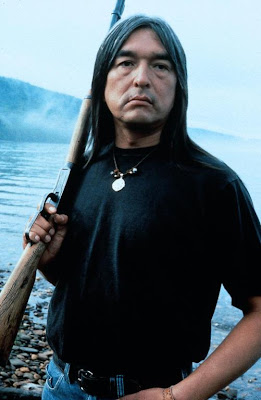 One of the most interesting Canadian-made (if Polish-directed) films of the 1990's was a seldom-seen gem called Clearcut, shot in Ontario and directed by Richard Bugajski. The film has never been properly released on DVD, and almost never screens theatrically; the only versions you can find are a VHS tape and a probably bootlegged DVD of the VHS version, which mixes and matches horrible pan-and-scan with stretched images that really mangle the compositions (check the opening of the film on Youtube for an example - you can watch the whole thing there, too, if you're so inclined; it's really not much worse than any of your other options, at present). I got my hopes up to hear that Graham Greene presented the film at the TIFF awhile back - as I recall, he cited it as his favourite of the films he has acted in, and I thought that a revival of interest could mean that a DVD/ Blu-Ray release was forthcoming. Alas, since then, there's been no news: I do Google searches every couple of months, and other than the odd German or French TV screening (under titles that translate as "the revenge of the wolves") - and a Spanish website that somehow has widescreen screengrabs! - there's been nothing...

The story goes like this: a well-meaning, liberal lawyer, Peter Maguire (Ron Lea, above), arrives at a protest in the forest on unceded First Nations land. The band he's representing has just lost a court case, and are about to have their land logged (this is an elaboration on MT Kelly's source novel, A Dream Like Mine, which takes as its "issue" the pollution of reservation drinking water, due to industrial dumping of mercury, rather than logging; but the film is nonetheless a more-or-less faithful adaptation of the book). Maguire sees cops and bulldozers and guys with chainsaws squaring off against both men and women with drums and banners; esteemed and now departed actor Floyd Red Crow Westerman - he of the Lakota ad - plays Wilf, an elder who, despite being in charge of the protest and being abused by one of the Mounties, seems surprisingly relaxed about things, reassuring the lawyer that he did his best (not everyone present is so forgiving). The demonstration turns ugly: tempers flare, chainsaws start, trees fall and blood spills, and Maguire, the lawyer, gets the hell out, cadging a ride to a nearby hotel with some media people. Along the way, he curses the government and the lumber mill and the police and the indifference with which his clients' case has been shrugged aside, saying things that start to sound like a cry for direct action, or perhaps revenge: "somebody has to pay!" 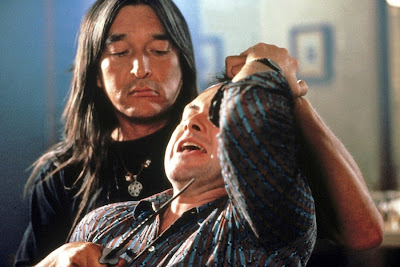 This is singularly unfortunate, because someone overhears his cries - someone who may or may not be an elemental force of rage, a spiritual being who rises from beneath the waters in the opening shots of the movie. Or he might just be a pissed off Indian named Arthur. In either case, Arthur takes the white liberal lawyer at his word and begins to tie up, threaten, and torture various people who have incited Maguire's wrath, which places the lawyer in an uncomfortable position; he can't stop Arthur without tacitly admitting that he prefers ineffectual posturing to real action, and he can't join in without people getting hurt and laws getting broken. He ends up occupying a middle-ground between accomplice and kidnap victim, as Arthur drags both he and the owner of the mill in question - the delightfully-named Bud Rickets, perfectly played by busy Ontario actor Michael Hogan - into the forest for one of those transformative ordeals that forests sometimes can provide in the movies. Rickets spits reactionary cliches at Arthur, then pleads with him, and finally just suffers at Arthur's hands; here's a capture from the infamous "debarking" scene (click on it for a much better view):

I probably shouldn't say much more about it, but Clearcut fascinates me for several reasons. One is that it plays with tropes borrowed from slasher cinema, making Arthur a sort of embodiment of the "return of the repressed;" slashers always represent the unacceptable, disowned drives of the viewer, but usually these are sadistic, sexual drives, not political anger. Further, because Arthur is (at least possibly) an extention of Maguire's rage, he becomes a sort of "imaginary Indian" - a conscious querying of what First Nations characters in films actually represent in the minds of white viewers; the relationship of Maguire to Arthur is not too far off from the viewer's relationship with him (presuming the viewer is a white liberal like me, anyhow). It would, of course, be even more radical for the film to speak FROM a First Nations perspective, but since its authors are, I believe, all white folks, at least it's got a level of honesty, here, admitting that Arthur is a figment of their own minds. 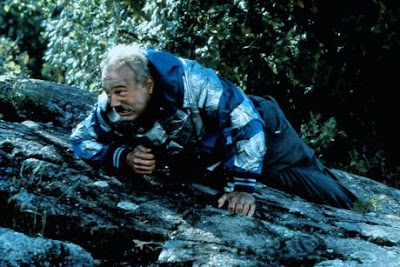 Mostly, though, the movie appeals because it has more ANGER in it - especially at the abuse of the environment - than one generally finds in non-documentaries; Arthur has some really nasty moments, which we're constantly being encouraged to think about, querying both his violence and our/Maguire's ambivalent reaction to it. I know from firsthand experience that Clearcut actually pissed off some politically active First Nations people at the time of its release; a Lakota pipe-carrier that I knew in my 20's was of the opinion - I paraphrase - that the film was irresponsible, portraying First Nations causes in a scary, unsympathetic light that would likely win land rights claimants more enemies than friends. I disagree, in fact; I think the film actually brings us very close to feeling Arthur's frustration, and invites us to enjoy his excesses, sometimes in spite of ourselves. He's a very attractive character. And a very scary one. 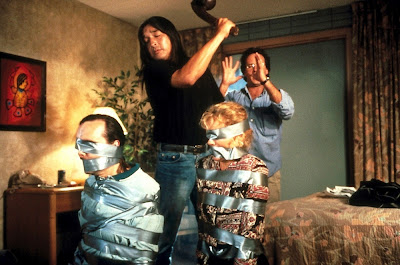 In any case, Clearcut is a  thought-provoking movie - and it really is Graham Greene's best role. Arthur is angry, expressive, articulate, and rather funny (especially if you enjoy your humour rather dark, bitter, and incisive). There's also some terrific landscape shots, including footage of actual clearcuts - something you would think would have been represented widely in Canadian cinema, given our still largely resource-based economy, but which in fact seem to be very, very rare. (One suspects the crew shot the clearcut in question guerilla-style, without permission - it's seen from a plane, overhead, as Maguire is being flown in at the beginning of the movie).

Come to think of it, not only are clearcuts rarely seen in Canadian cinema, so is mention of First Nations land rights issues. They certainly don't pop up often in films designed to reach a wide audience, which Clearcut - essentially an exploitation film, if a very intelligent one - certainly is. I wonder if it's the Canadian discomfort with the topic - our apparent desire to forget, to deny, to erase - that has led to this remarkable film disappearing between the cracks to the extent that it has? If so, that alone should count in its favour, that is should push buttons to such an extent that people prefer to look away. Clearcut is one provocative, uncomfortable piece of cinema, and the wounds it probes are anything but healed. 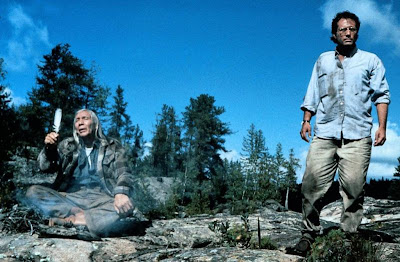 Here's hoping someone somewhere is working on a DVD release of Clearcut. It's well past due. Here's another blogger that thinks so, and a rather exhaustive, entertaining hodgepodge of quotes from the film on IMDB.

I guess I should go try to figure out if there's actually been a Spanish DVD release of this film, now, from which the image below might have been lifted... I always wondered what that composition would look like in widescreen...

I think clearcut was actually released on dvd, at least you can download it through torrnents like piratebay.

Thanks for the comment. Indeed (as, erm, I do say above) there is a (dubious, likely grey market/ pirated) DVD out there, and the film can be found on torrent sites, or on Youtube. The problem is, all of these are very likely of a combination pan-and-scan/ stretched, and thus quite badly mangled presentation of the film, identical to the old VHS. Certainly the DVD and Youtube versions are thus; I've only tried one torrent of it, so can't say with certainty that someone hasn't gotten a widescreen presentation off cable or such and put it online, but I haven't been able to find one, if so. I have looked.

All of this is kind of beside the point, however; you misunderstand what I'm asking for. I'm praying for the film to be properly, legitimately prepared for DVD and Blu-Ray, so it can finally be seen in a high-quality version with the proper aspect ratio - because I've seen the film about ten times now, but NEVER framed properly. It would be also nice if it can perhaps reach a wider audience through a legit release. That's the issue, not that the film can't be pirated or seen in a crappy, VHS-quality, improperly formatted version. EVERYTHING can be seen that way, pretty much, if that's all you want. It's not an answer to the problem; in fact, the availability of shitty-quality torrents of this film (and the fact that some people seem to be satisfied with them) makes the legitimate release even less likely.

Bravo, MacInnis. You have articulated my very sentiments. One of my most beloved movies, and actors. Have yet to read "A dream like mine". Let us hope for a quality DVD release. I too have viewed this many times on You Tube, and like you search the InterWeb for any DVD release.Thank you for the beautifully articulated piece. Respect

Thank you! (And do read A Dream Like Mine - it will enrich your appreciation of the film).

By the way, Anonymous - please do keep me in mind if you hear of ANY news in regard to this film being distributed... It's really good to know someone else out there is as keen as I am about this one...

Two quick things - I re-viewed the dubious DVD I mentioned (the one where Clearcut is packaged with Red Surf and The Living End) and you know what? If you adjust the aspect ratio of the TV, just enough images are STRETCHED in the pan-and-scan that it actually looks pretty good at 16:9. It's still not perfect but it's better than I'd ever seen it before!

Also: Ryszard Bugajski has a new film, The Closed Circuit, in this years' VIFF. It's quite good - a nasty-edged corporate thriller that spares no prisoners when it comes to Polish officials...

Hey, so there's an even better, if still illegitimate, presentation of Clearcut on German DVD - and I'll be screening it on Tuesday, March 10th, 2015 at the Vancity Theatre.
http://www.viff.org/theatre/films/fc8424-clearcut

You can get the DVD on eBay. It's not perfect - it's too dark, the contrasts too stark, and it was seemingly ourced without the director's permission off a broadcast master he prepared for German TV from his own film print - but until such a time as a legit DVD release is prepared (which may not be too long, in fact, but I can't say more) its the best way to see the movie, and it's what we'll be projecting from. You can turn off the subtitles (or watch it dubbed in German!). You need a region free player to see it, tho'!