A week of genre films: a handful of DVD reviews

Caught up with a few genre films this week on DVD. 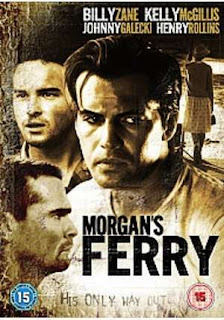 Finally saw Morgan's Ferry (2001), notable for having one of the larger film roles of Henry Rollins. Hank can't act - anyone who saw The Devil's Tomb knows this - but he can channel a great deal of intensity into a role, so he's kind of perfect as a vicious escaped convict who - along with co-escapees Billy Zane and Johnny Galecki - hides out at the farm of a lonely spinster (Kelly McGillis). The main surprise the film boasts is that it's a chick flick - written by a woman, narrated by the McGillis character, Crazy Bonnie (tho' if the credits are accurate, the narration is voiced, for reasons unknown, by a different actress), and essentially revolving around Bonnie's romance with one of the convicts. There's an archetypal simplicity to the film that actually had me thinking of "Goldilocks and the Three Bears," except in this case, it's the bears that come to Goldilocks (here please overlook the usual association of the term "bear" with fat, hairy gay men): Henry is the rough, cruel, violent "bear;" Galecki the immature, pre-sexual, whiny one; and Zane, in the middle, is "just right." Female viewers (or those other bears) seeking a moderately spicy fantasy will likely appreciate a beefcake scene where all three men bathe naked in McGillis' yard; oddly, Rollins' back is lacking his giant Search & Destroy tattoo, which I'm pretty sure he had when the film was made, so they must have put make-up over it or something (I bet ol' 2.13.61 did special exercises so his nekkid ass would look good). Not a great film, but I find the psychology of chick flicks somewhat fascinating and novel (since I don't watch many of them), plus the late Roscoe Lee Browne has a small role (tho' not much is done with him), so I kind of enjoyed the experience, overall. I won't go so far as to recommend it to anyone else.

Thanks to the Fuck Yeah Henry Rollins page for a memorable illustration - they're of the opinion that the tattoo was airbrushed out...

More surprising than seeing Henry Rollins in a chick flick is seeing a good Uwe Boll movie. Rampage, from 2009, is actually very, very entertaining, tho' in a nasty, misanthropic, socially irresponsible way. The star is a talented young Canadian actor, Brendan Fletcher (above), whose past roles include a rather great, Robin Wood-admired, queer-themed youth movie called Rollercoaster, as well as the latter two Ginger Snaps films, and Terry Gilliam's unwholesomely strange film Tideland - where he plays the slow young man who makes out with the prepubescent main female character, in scenes which are both brave and upsetting. Boll casts Fletcher as an angry, elitist twentysomething with a plan, which involves dressing in a homemade suit of body armour and going on a killing spree in a small Oregon town - though IMDB lists it as being shot in Vancouver, and certain scenes (especially the bingoplex) appear to have been filmed in Maple Ridge (the bingo hall is actually one I've been to, playing bingo with my Mom a few times during my childhood). 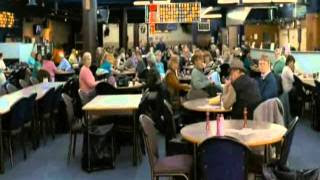 As an alienated, pissed off, powerless teenager, growing up in the town where Rampage was shot, I occasionally indulged in shooting-spree fantasies myself (tho' I never actually planned to survive the shooting spree, which just wasn't done back then; good taste required you to turn the gun on yourself at the end, or let the cops shoot you, or something). Admitting to such fantasies (note: this was thirty years ago, so relax!) is something that no longer seems very safe to do, given the number of people who make theirs reality nowadays - but this aura of danger makes Rampage pretty effective as a horror film. Not sure if it deserves to be taken seriously as anything more than that - if it has anything real to say about  politics, overpopulation, or such, despite some decorative speechifying by Fletcher -  but I admit to being thoroughly entertained by the film, and somewhat shocked at its craft.

Just for the record, I'm not one of those contrarian trolls who goes around talking about how In the Name of the King (2007, also Uwe Boll) was a good movie; in fact, watching a scene in Rampage where the "protagonist" burns a great deal of money, I wondered if Boll was somehow referring to his past experiences with that film, which reportedly had a budget of $60 million... 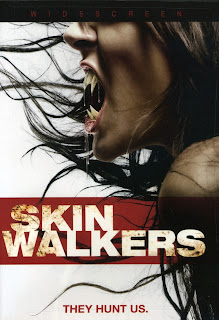 Much as I enjoyed the Ontario-shot Skinwalkers (2006), it is also not really what I would call a good movie. It's utterly ridiculous, in fact, telling the story of two rival factions in the world's werewolf population, one of which wants to remain werewolfish, and one of which wants to pass for human until such a time as they can be relieved of their curse - a turn of events that werewolf prophecy (?) indicates is coming very soon, and depends entirely on a very special 13 year old boy. It sounds a bit like a True Blood subplot, minus the sex and the humour, but it's packed into an hour and a half, and presents information about its rather elaborate backstory at a breathtaking pace, so that you feel at times like you're watching the sequel to a movie that has never been made. Still, this actually manages to register more as a gutsy faith in its genre-loving audience than, say, incompetence, at least if you're feeling generous (something which the film somehow inspires in me, though I admit to being in the minority here); which is to say that if this all sounds like silly fun to you - you'll probably enjoy it. Skinwalkers also boasts shots of werewolves on motorcycles, though unlike Werewolves on Wheels (thanks go to Adrian Mack for turning me on to that one), they don't actually ride on motorcycles when in their wolfish state (a missed opportunity). A high point is when the bad werewolves ride into a small town that is actually a haven for the good werewolves and start shooting the place up; for creatures with claws and fangs, they rely an awful lot on guns.

Fond of it as I am of it, Skinwalkers must be a career low for Elias Koteas, who plays the uncle of the 13 year old and the leader of the werewolves who want to become human. I like Koteas a great deal - it was his name on the DVD box that convinced me to pick it up, and it presumably IS him acting under werewolf make-up in key scenes. He does just fine (ie., he doesn't manage to telegraph that he feels trapped in a piece of shit, like Burt Reynolds does in In the Name of the King), tho' Koteas fans looking for gems that he's involved in would be better off seeking out the underrated neo-noir Hit Me, based on Jim Thompson's A Swell-Looking Babe. Other Canadian actors pop up in Skinwalkers, too, tho' in smaller roles; just like you can tell that the BC-shot In the Name of the King is not actually a Canadian film by how quickly Gabrielle Rose's character is killed off, you can tell that Skinwalkers isn't actually a Canadian production by the half-minute of screentime granted Julian Richings, right at the film's end.
Does anyone else get happy whenever Julian Richings - Hard Core Logo's Bucky Haight - pops up in a movie, even briefly? 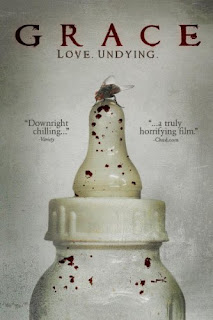 Final film to mention: Grace, from 2009, is a sort of monster-baby movie which I had ignored until I spoke with Gabrielle Rose and discovered she was in it (more on my conversation with her at a later date). Not only does it boast one of her largest roles in a non-Canadian production, she recommended it as an effective horror film, so I pretty much had to see it. It is, indeed, quite artful and creepy and has more than one effective/ sickening scare in it (especially if you find the thought of breast milk kind of gross). I couldn't quite fit my mind around aspects of the film, however: there is a too-frequent-to-be coincidental reference to veganism, for one, and a few intercut animal cruelty scenes - cows being slaughtered and such - that don't seem to bear any great relevance to the story being told, and occur at shocking, confusing junctures. The denouement of the film is even briefly viewed from a cow's point of view (don't get excited, the Grace cow has nothing on the one in Kingdom of the Spiders). The film also makes reference to midwifery, mistrust of hospitals, and other aspects of New Age/ holistic health and dietary practices - from soymilk to wheatgrass and beyond - but I couldn't really deduce what it was saying with any of this, at least some of which seems strikingly beside the point. Since the image on the DVD box is of a blood-spattered baby bottle, I don't suppose I'm spoiling anything to reveal that the film is about a sort of vampiric infant, and since infants usually drink milk, and cows are a primary source of milk, I suppose there could be some poetic attempt to say that the film is really a horror film about what we eat - as if our dependency on flesh foods and animal products is also a sort of vampirism. This doesn't, alas, account for any of the main action of the film, which involves a possessive, controlling mother (Gabrielle Rose) trying to steal her granddaughter (apparently born dead, in one of the film's more heart-rending moments) from her daughter-in-law (Jordan Ladd - Shanna in Death Proof), without realizing the baby's special dietary requirements; nor does it dovetail very neatly with the main horror of the film - which involve bloody-nipple sucklings that flinch a bit on the gore, but in terms of emotional impact, still put the explicit tit-biting in Burial Ground to shame. Even if I can't quite piece it together into a coherent whole, there are plenty of unsettling moments in the film, and fans of horror movies will certainly want to seek it out (one wonders what Robin Wood, with his fondness for It's Alive, would have made of it?) 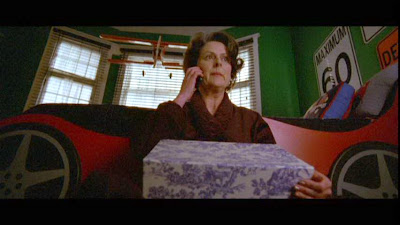 All for now. See y'all at Neil Young.
Posted by Allan MacInnis at 3:38 AM