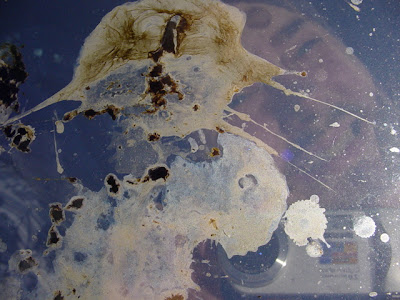 Birdshit Al: a self-portrait in a friend's birdshit-encrusted sunroof

Some of y'all may remember my shocking discovery a few months back - that pigeons were nesting in my chair on my balcony. Since I couldn't bear to disrupt a nest with a baby in it - whatever the hell a baby pigeon is called - I left them be for the summer, resolving to get rid of them when fall came - because surely the baby would be grown and flown, by then. And beside, they're birds, they migrate south, right?

Wrong. Pigeons don't migrate, and they mate all year round, so when the one baby was flown, they had another, which was cheeping and peeping on my balcony through early October. When my deadline came around for dealing with them, I had to extend it, until the NEXT baby had flown. During these last few months, I've given them free reign on the balcony, stopped even trying to shoo them off, as I once did, since the nature of their investment in the space was clear to me. Know what a balcony looks like when pigeons have been pooping on it fulltime for months? 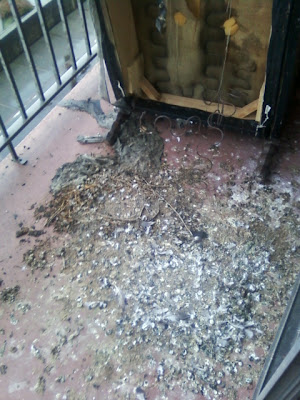 Anyhow, last night I decided that it was well past time. I'm procrastinating on some writing, and nothing is better for procrastinating than getting your cleaning done: you can be productive and cowardly at the same time! I bought some gear - tools for shitscraping, shitscrubbing, and the like, and, last night, served my pigeons notice: with no warning, I stormed out onto the balcony and tilted my armchair on its back, and two terrified birds - their two progeny have long since flown - took off like, er, bats out of hell. There was no egg, no baby, nothing but the mound of shit, feathers, and nesting material that you see above (an inch thick in some places - you don't really get a sense of its DEPTH or CONSISTENCY from that photo). I left the chair on its back overnight, and the pigeons did not return; and this morning, I set about the first phase of cleanup. 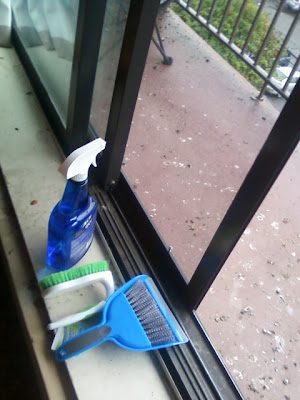 I dressed appropriately: disposable, torn-up dress pants, disposable plastic gloves, two divorcee socks that haven't seen their partners in eight years, lingering optimistically in my "single socks" section of the drawer, and a pair of easily cleaned Crocs. The eye and mouth mask was probably overkill, but they were only a couple bucks at the loonie store, and if there are two places I don't want pigeonshit, it's my mouth and my eyes; bad enough that I had to inhale the stink of it. 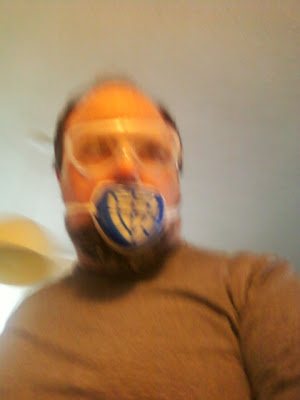 It took me an hour, kneeling on the balcony, first scooping, then scrubbing, then splashing cleaning product and hot water around and mopping up the milky grey excess with a paper towel. At the end of the process I just threw away the pants and the socks. There are still mounds to scoop up from behind the chair, but that has to be cut up and hauled down to the dumpster; I'll get to the remaining shit-corner in a few days. Right now, though, I've got to take a shower, because I can still smell the pigeon shit on me. There's still a patina of residue on the balcony but I think mostly I've done a pretty good job, for Day One. 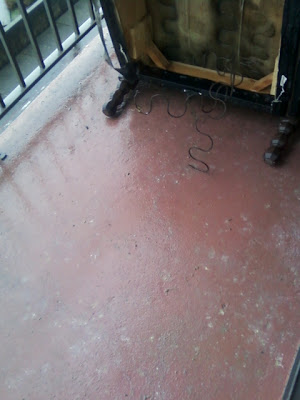 AMAZING!!!! And such a fun read! Congrats on a job well done!

AMAZING!!!! And such a fun read! Congrats on a job well done!

It's much funnier now that you've pointed out I have my mask upside down.