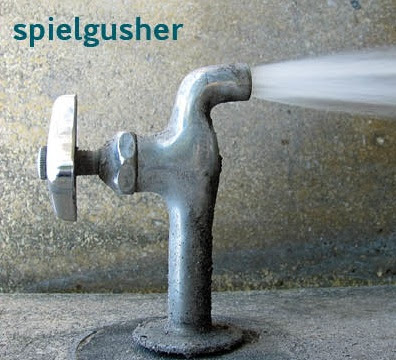 Hey, Spielgusher is out! It's been rumoured for a long time, was originally conceived of during the days of the Minutemen, finally taking the form of a coupling of rock writer Richard Meltzer's poetry and Mike Watt's bass, with a couple of Japanese on guitar and drums. I have loved some of the writings of Richard Meltzer and much of the music of Mike Watt, but am a little unconvinced that I need this - 'specially after Hyphenated Man (which I've spun maybe five times, to prep for Watt's show, and then shelved. I'm kind of ready, truth be told, for Watt to stop writing operas). Still, uh... it's something to consider. Here's "Fuck Awareness Week" - the guitar (by Hirotaku Shimizu) is pretty awesome, actually...

Gotta say, though - if you're hungry for Watt that you haven't heard, and you don't already have'm, you should go seek out one of the three CDs by the Unknown Instructors, with Dan McGuire doing the poetry and Watt, Hurley, and Saccharine Trust's JOE BAIZA doin' the prime music (with guests like Raymond Pettibon, Jack Brewer, and David Thomas, usually contributing vocals). Based on that one Spielgusher track, I think I'd rather hear McGuire read than Meltzer (unless he was going to blurt out "Electrocute Your Cock" - now THAT's a Meltzer vocal performance I can get behind!).

By the way, should Dan McGuire ever read this: I DID write reviews of Funland, which I shlepped around to a few places. None published it. Awesome album, though - 'specially Joe's guitar. Peace.
Posted by Allan MacInnis at 3:14 PM

I had never heard of The Unknown Instructors, listening on You Tube now. Amazing...Thanks!

No worries! Maybe I should post my old Unknown Instructors interview sometime - I actually talked to McGuire, Watt, and Baiza when the album came out, back in my Nerve Magazine days. (If you don't know Saccharine Trust, check'em out, too - I particularly am fond of Surviving You Always - "Craving the Centre," "YHWH on Acid," their cover of "Peace Frog," "The Cat Cracker"... tho' there's some awesome, far less punky stuff on We Became Snakes. Watt's a guest on Worldbroken but that album never really grabbed me).

This all started a Mike Watt OCD thing for me with the upshot that I started playing bass again after 6 years. I had my mid 70s Rickenbacker stolen and I was so broken hearted I couldn't play anymore. I suck, but I am having fun. I owe you a beer.

Hey, right on! (I love bass guitars - if I had any musical talent at all I'd play bass).

You ever check out Dos, Watt's project with Kira? Liked what I've heard...

Yes I watched some vids on Y.T. I would like to hear more.