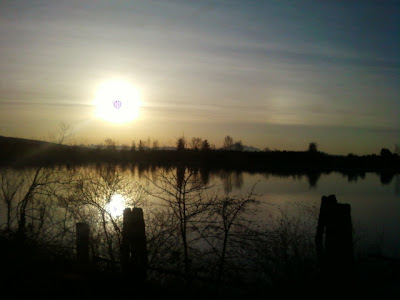 In the last three weeks, I've had two bouts of illness, an ear infection, two rounds of antibiotics (and the concomitant diarrhea one expects), one bit of very bad news about an old friend, and three pretty much utterly sleepless nights (two of which happen to have been last night and the night before, where I've been kept up by coughing). Add to that an ongoing and apparently un-defeatable fruitfly infestation in my kitchen and I think it's safe to say that it's been a rough stretch - though in terms of bad life experiences it was really only a 6.5 on the scale of 1 to 10 (with 10 being the worst imaginable... believe me, it can get worse than this). But having taken one week off school for illness and one week for midterm break, I had no choice but to rally myself and get on the train this morning, sleep-deprived or not, and make the trek to UBC.

It was, actually, a pleasant ride in. The sunrise over the Fraser was quite lovely, in addition to which I saw one eagle (not the "bald headed" variety, but a brown one) as it landed on a tree branch and, a couple miles of track later, spied two coyotes - young and small - running together across a farmer's field. My first class involved a screening of a fascinating Claire Denis "New French Extremist" psychosexual horror film with Vincent Gallo and Beatrice Dalle, Trouble Every Day, which somehow I'd never even heard of before this semester. I highly recommend everyone seek it out (there is no Region 1 release, and torrents tend not to be subtitled, but the majority of the film is actually in English, with the French portions adding very little to ones understanding of what's happening). I've seen it twice in full already but got even more out of it the third time through - I love movies that reward attention like that.

The day's most interesting detail came after the film, however, when I bused downtown to meet a friend for a beverage. At Granville and Robson, there's a new round of con-destruction going on, knocking down that optical shop that used to have the cool, creepy Hallowe'en displays and various other small businesses on the corner (it was apparently called "the Farmer building," for the record). What's interesting is not the rubble itself but what has been revealed painted on a wall previously invisible, now exposed for the first time in some 90 years: an ad for a Harold Lloyd movie that played at the Capitol 6, back when it was just the Capitol (of course, that theatre is also now destroyed, too, but y'all remember it, eh?). Grandma's Boy is a film that was made in 1922, and must have played Vancouver pretty much immediately, because the Farmer building went up that same year. The discovery has already been reported in the Sun, which informs us that such signs are called "ghost signs," and that ones advertising movies are relatively rare... but I very rarely read the Sun, or any physical newspaper save the Georgia Straight, so stumbling across this sign was an utterly fresh thing for me. 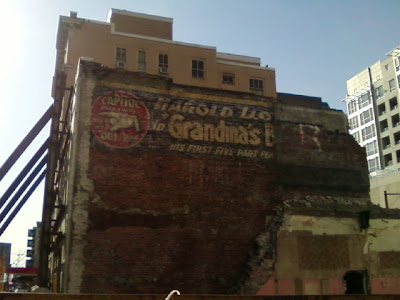 I haven't seen the film, but the Wikipedia page explains that the film - shown in five connected parts, as the sign says - helped "pioneer feature length comedies," and that it involves a timid man (Lloyd) who is given a magic charm, supposedly from the Civil War, to help him get the courage up to "woo his girl." (The charm actually turns out to be an old umbrella handle - grandma's been tricking her grandson, for his own good). 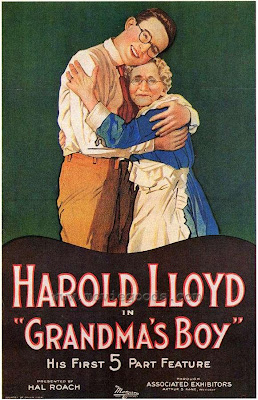 ...which all sounds rather sweet, actually. I suddenly find I have more fondness for the ghost sign than I ever did for the former Farmer building. I'll be very surprised if whatever they build in its place beats either.

Meantime, the rubble IS cool: 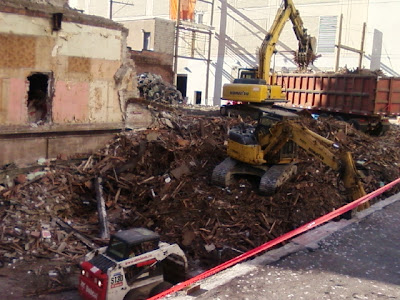 Another view of our ghost: 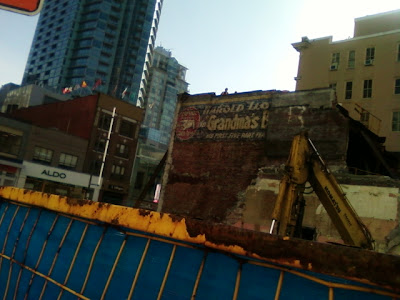 And for anyone who doubts how exhausting this stretch has been for me, y'all are invited to take a gander at this photo from today's commute. I am very happy to see my face so skillfully displaying EXACTLY what my life feels like right now: 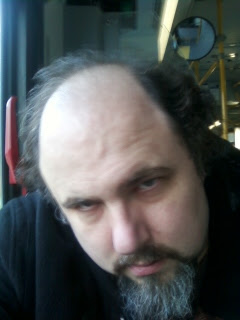 But I have duties, besides schoolwork - somewhere I have a big article on Petunia and the Vipers that I gotta stick online (not here) to promote their March 10th show at the Ukrainian Orthodox Hall; their last show there was a delight, so this is a gig I'll be highly recommending, if you have ANY interest in roots music or rockabilly or authentic old country or such. Harold Lloyd would doubtlessly dig it.

More on that later, tho'. Otherwise, consider me sleeping.
Posted by Allan MacInnis at 11:36 PM

Just found your blog, sir, as well as your defunct other. All praise to you; admire your taste and hope you're doing okay. Whatever okay is.

Stop by my blog HALF A BALLOON or go by the Twitter @flipyourface if you're feeling it. And if circumstances conspire, maybe I'll see you bopping around the Bresson retro or the like.

Again, my best, and glad I found your work.

Bresson retro? I think I must have missed this. God, I hope it starts after classes are over. I will now mosey over to the Cinematheque site, where I presume this is happening...

Will check out your blog, thanks!

And, by the way, thank you for writing about this find - I hadn't walked by that corner for a bit and this was the first I had heard about it. Will investigate further...

"Grandma's Boy" played on the Blu-Ray player on my desk all day today (Wednesday, February 29th)and you know what that means - since 1922, that arrow's been pointing in the wrong direction!