Environmentalist Cinema at the Vancity Theatre: oil sands, Enbridge, and more things to be very worried about 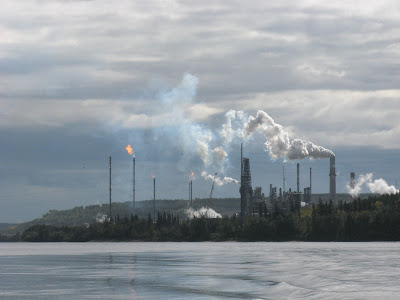 Some essential environmentalist cinema coming up at the Vancity Theatre, of great relevance to anyone concerned with what's happening to our country under Conservative direction: White Water Black Gold - official site here - deals with the impact of Canada's activities in the Alberta tarsands, and the likely outcomes of piping that oil across BC. Narrated by Peter Coyote, whom we don't see enough of these days - his voice is sort of a narratorial comfort food - it will also be of interest to anyone concerned with the way the world's water resources are being used. Director David Lavallee will be present for a discussion on the Enbridge pipeline on March 7th - a pipeline which, if completed, will see oil tankers (and their spills) off the coast of BC, and lead (potentially leaky) pipe across as-yet-unspoiled wilderness and wetlands and through the territories of various First Nations peoples, many of whom do not want the pipeline crossing their land. More on that here - the Pipe Up Against Enbridge website. People of a Feather, on a somewhat related note, shows how the way of life of the Sanikiluaq people, who live on Hudson Bay's Belcher Islands, is being impacted by environmental change; people interested in that may also want to catch the socially conscious (but not environmentalist per se) A Place Called Los Pereyra.

It all sounds very worthwhile and educational, though if at all fragile, you might feel safer sticking to the very likable, more-or-less inspiring and Canadian-directed Pump Up the Volume, also screening soon. I remember really liking this at the time of its theatrical release - and not just because Henry Rollins and the Bad Brains cover "Kick Out the Jams" on the soundtrack.

PS. - some friends of mine are expressing concern, so I should note that I'm doing fine, considering. Though I have another bout of illness to contend with, a backlog of schoolwork, and so forth, I'm also off class for a week and catching up on good things like sleep. I just awoke from midafternoon dreams where I had stumbled across a story linking Robert Downey Sr. - the director, soon to be the subject of an Eclipse box set - to the Unabomber - or my sleeping mind's approximation of the same - and was preparing to interview both. It was all very dramatic, though apparently not at all psychic, since doing a Google search for "Robert Downey" + "the Unabomber" - degrees of Kevin Bacon be damned - nets exactly zero hits.

Or did until I wrote this.
Posted by Allan MacInnis at 2:37 PM