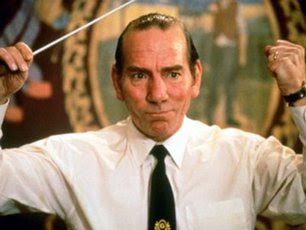 At age 64, with many years and many films left in him, Pete Postlethwaite has died of cancer.

Postlethwaite's probably best known to my blog readers as a character actor - as the father in In The Name of the Father, or as Friar Lawrence in Baz Luhrmann's Romeo and Juliet. He also plays, very briefly, the dying father in Inception; and he's underused - but still exudes menace - in the new release The Town (which I didn't mind, actually; though it's a far cry from The Friends of Eddie Coyle, at least Affleck, in making a Boston crime pic, clearly is aware of that film, though I found the ending had a bit too much cheesy sentimentality to it, a quality that Eddie Coyle would scoff at). Something about Postlethwaite's performances always elevated the films he was in; sometimes, he's the best thing by far -- he certainly towers head-and-shoulders above the rest of the cast (including many fine actors and actresses) in Spielberg's Jurassic Park 2, where he plays the head "dinosaur hunter." I rather love the anecdote offered in the Wikipedia article on him, about that film:

Looking through his filmography, of the fifteen films there I've seen, one is a bit of a gem that readers of this blog might want to seek out, should they wish to pay Pete respects: Brassed Off, from which the still above was taken. It was actually brought to my attention by one of the teachers at the high school I taught at in Japan, an attractive (married) female teacher in her 40's, who knew and loved the film as Brass! - the somewhat more upbeat Japanese title, made a little less mysterious to non-English-speakers for being shortened, while actually enhancing the double meaning. It's a rather emotionally powerful experience, set during the coal mine strikes and shutdowns of the Thatcher regime, focusing on a group of miners who form a brass band; it manages to be quite fun at times - and has some of the most powerful images of working class anger-at-being-screwed* that I've seen in a fictional film. An enthusiastic early Ewan MacGregor performance, too, though Pete, of course, towers over him.

My respects to Pete Postlethwaite, and condolences to his family and friends.

*There oughta be a word for "anger at being screwed," to differentiate it from other forms of anger, but awakened by dreams at 4AM, I am unsure what it might be.
Posted by Allan MacInnis at 4:22 AM