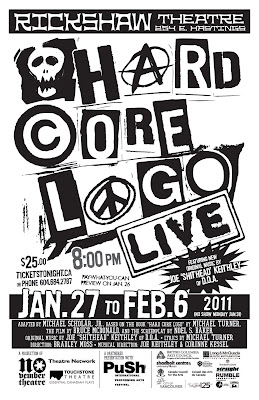 This could be very, very interesting. Hard Core Logo Live - a musical adaptation of Michael Turner's book, with an as-yet-to-be-seen relationship to Bruce McDonald's (terrific, terrific) film, is starting next week at the Rickshaw, with music by Joey "Shithead" Keithley and with Bev Davies as "punk consultant"; Bev saw several of the prairie performances and tells me they were great, and apparently will have some of her photos at the Rickshaw on display. The book - about a reunion of a fictional Vancouver punk band - is a very different beast from the film, and no doubt the live show will be an equally discrete beast-unto-itself. As sometimes happens with a film I know I want to see, I've gone out of my way NOT to read up on it in advance, so as not to lessen any of the surprises - but I will be sure to post my reactions once I've seen it. (And bear in mind that Bruce McDonald has completed Hard Core Logo 2, which apparently showed at the Whistler Film Festival...)

Apologies for not having given the "play" more press than this, but... surely EVERYONE is going to this, right? If you need ME to tell you about it...
Posted by Allan MacInnis at 11:58 PM