The Creaking Planks anniversary show! ...plus the Minimalist Jug Band and Petunia 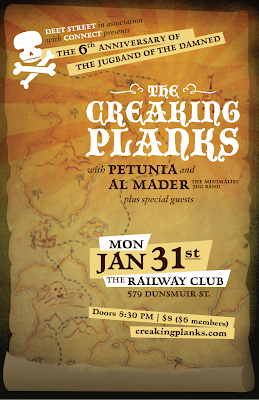 Heather Jean McDermid - AKA Lee Shoal of the Creaking Planks and Ejaculation Death Rattle - describes the Planks' upcoming 6th anniversary show as "the celebration of our evolution from being essentially a few people practicing in public to a force of silliness to be reckoned with;" the show marks the band's first deliberately organized anniversary celebration since what Rowan "Blackbox Squeezebeard" Lipkovits describes a "catastrophic spot on our 3rd at 2008's Dark Blue Horse Cabaret." 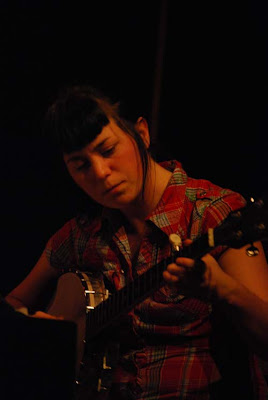 Lee Shoal in EDR mode, photo by Femke van Delft, not to be reused without permission


The 2008 gig took place at the Western Front, the site where Lipkovitz first met Heather and original Plank Ole three years previously, when the massively-bearded accordion player/vocalist had been promoting the group performance poetry show "That's My Brain... And You're Killing It!" "The reasons for its failure as an anniversary aren't anyone's fault and amount to unrealistic expectations; since then, instead of lining up birthday shows we've just taken gigs offered us, which has been a baby step up but still a bit of a drag." Some of these gigs were an odd mismatch indeed - "occasions where folks wanted a dance band and got a string quartet," as Lipkovits puts it. "I felt bad drawing on individual Planks' increasingly scarce spare time to get them to turn up for strange and random gigs where we just puzzled or bored people (since as fascinating as we are, if you're really in the mood for a house DJ, we can't effectively substitute.) It since became apparent that we could have better shows, both in terms of who we end up sharing the bill with and what we end up taking home, if we set them up instead rather than just yeaing or naying what was offered us, so as soon as the craziness of the 2010 Accordion Noir festival wound down, this date loomed large on the horizon."

For the show, the band has organized what should be a delightful cabaret of talent. Lipkowitz explains that "a brief and highly scientific poll of the Planks regarding what we actually wanted for our birthday show - a reward unto itself regardless of how else the night turned out - unsurprisingly had us looking back to things we'd left behind: that same Al Mader Jug Band minimalism that got us together in the first place, plus his busking-brother Petunia the yodeling cowboy." (Both Al and Petunia will perform that night; McDermid adds that there's a chance original Plank Ole might also show up for a song or two.) Says Rowan, "we wanted our birthday to be the kind of show where we could just show up, play, and enjoy ourselves, without hauling tons of gear and working all night, and the Railway is a very respectable example of that kind of venue - where we might even make a little money, to boot! We landed the room through Dieter Friesen (of 'Deet Street'), who picked up the reins of a monthly night there after inheriting them from Tamara Nile (who somehow, strangely presented our first appearance there back in the performance art days with Deet's band Rick Danko's Ghost also on the bill. We made an impression on him (I bet we did!) and years later when he came sniffing around to fill a spot in his new series, he was pleasantly surprised to find that we'd developed from curious to actually entertaining.) With starts and stops and all these milestones it's worth mentioning that this will be the last installment of his Deet Street shows at the Railway, so it's fortunate for us that we didn't form in a February." 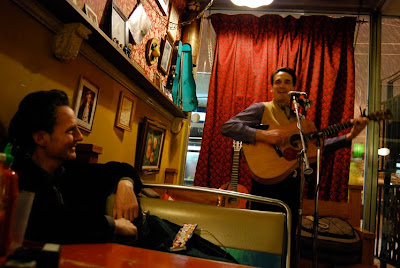 Rowan wrote a fairly elaborate email explaining all this to me, as you may gather, so I'm going to just turn the reins over to him now, without attempting to incorporate his writing in mine. Let me just add that I've long held that the Planks are one of the funniest and most engaging bands in Vancouver, that I've never less than thoroughly enjoyed what they do, and that they may well have copies of their delightful Flogged Round the Fleet CD at the show - which sounds rather like an interpretation of contemporary pop as performed by Eastern European Jewish villagers. The remainder of what follows is straight from the Squeezebeard, talking about pending Planks' plans.

"With one exception (an Accordion Noir-sponsored Pleasing Squeezing show at the Railway Jan 1st with Fang and Winnipeg's Ingrid Gatin, an exact duplicate of a great show we put on last May) we're taking Jan 2011 off from gigging with the intention of retiring some of the songs that we've been playing non-stop for six years and freshening up our power set with more original material and some new strange covers - or at least old ones we set aside and never remembered to pick up again. Even after the new set is up to speed, I get the feeling that to increase the fun!-to-'meh' ratio of our local shows we'll be following Geoff Berner's lead and slowing them down from the 'every 8.5 days since being founded' cited in our press kit. Maybe only one benefit a month. Maybe only shows that will be promoted. Who knows, perhaps even a focus on getting paid. Anything is possible! And ideally, 'anything' will include touring festivals with Raghu Lokanathan."

"Our next piece of merch, the Creaking Planks book, continues slowly but apace, including poster artwork (from eg. Mei K of the Tiny Vices webcomic), recipes, song charts and anecdotes from our first strange 6 years. I'm hoping to include both a Plankian Choose-Your-Own-Adventure and a flip-book animation in it (hopefully from Peter Guindon of "Sandwich Artist"/ "Cougar Man" fame.) For no good reason (rather, a wholly arbitrary one) we're hoping to have a new and original-song-full (and hence, affordably-mass-reproducable) recording together by May... though we haven't yet strategized a recording schedule or even written most of the songs that will need to populate it. Trifling details! Best of all, like Voltron, the book cover should contain a little flap just the right shape and size for a CD. But the first run may just have to contain a voucher redeemable for one... or a website URL 8)."

"A final note - I got carried away from by my own surging tide of prose: where possible (RIP longboarder Glenna Evans) we're hoping to draw on a fabulous cast of former and part-time Planks to do guest-spots at our anniversary show and, who knows, exceed our record of 11 of us on stage at the same time." 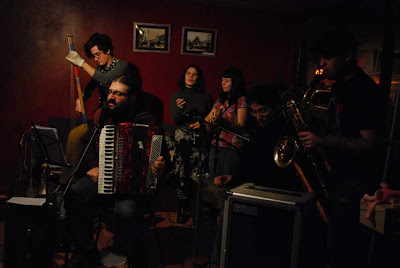 "The Rembrandt Photo" of the Creaking Planks, at an Obama Victory Party, by Femke van Delft