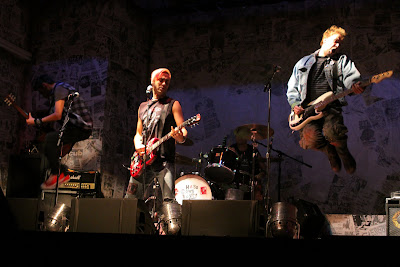 All photos by Bev Davies, not to be reused without permission.

Hard Core Logo Live, playing now through February 6th at the Rickshaw as part of the PuSH Festival, is: brilliantly conceived and executed, totally unnecessary, and a lot of fun.
Brilliantly conceived and executed: from the gig-poster splattered stage of the Rickshaw - decorated to evoke the bathrooms at CBGBs, with vintage punk posters covering every inch of the proscenium, to a visual gimmick lifted from the film for the driving sequences; from the performances (the standouts being the writer Michael Scholar Jr., as an energetically manipulative Joe Dick; Clinton Carew, channelling Rory Cochrane in A Scanner Darkly, as the band's bipolar bassist; and the seemingly limitless Rachael Johnston, as, among others, Nardwuar, Bucky Haight, Mary The Fan, varied nameless graffiti artists, and about half a dozen other roles, all delightful) to the "band's" energetic live versions of Joe Keithley's tunes, written around Michael Turner's original lyrics, opening with "Rock'n'Roll is Fat and Ugly" and including, as one might hope, a version of "I've Been Drinking at the Railway," which didn't get featured in the film... From the decision to stick with most of the narrative devices and ideas of the movie(including a delightful acid-trip goat sacrifice - yep!) to the decision to jettison the Toronto-esque sounds of the "movie band," instead to offer something that rings truer to Vancouver punk... everything about this play is a great fucking idea, perfectly executed, the obvious fruits of a labour of love. 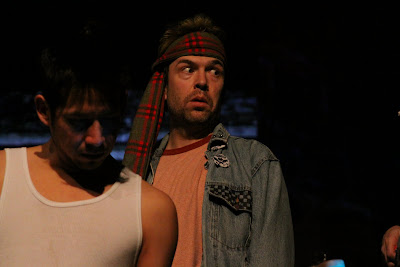 It's also, if I might say so, totally unnecessary. The film adds something to the book, enriching its vision; the play - with the exception of the "truer-to-life" west coast punk sound of the band - adds very little to what has already been achieved with this story, save for the experience of seeing it acted out live. Granted, that's no small thing, and it's a whole lot "less unnecessary" than, say, the comic book version of the film... but like many of the gestures of fandom, there is something wholly gratuitous about the experience: there is no grand reason d'etre here, no need for a theatrical version of a film adaptation of a book about a band that never existed, save that it's a delightful thing to do & watch. The play will work best for those who love the movie and the book so much that the idea of seeing it done live needs no further justification; otherwise - one could just as well go see, like, a real gig by a real band! 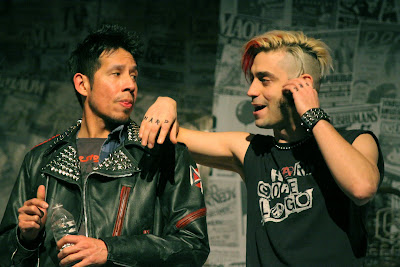 That is, however, not really any objection at all to seeing Hard Core Logo Live - it's not even a quibble, more than it is an excuse for not having anything particularly important or insightful to say here: I enjoyed the experience of the play immensely, enjoyed the intelligence and craft of all involved - I had a really fun night out. The cast offer their own interpretations of the characters, highlighting different aspects of them than we see in the film; the performances of the songs are credibly punk and invited real whoops and cheers from the audience (if, thankfully, no actual spitting or moshing); and nothing in my recent life has been stranger than watching Raechel Johnston, in Nardwuar mode, doing a perfect imitation of Nardwuar giving an interview less than twenty feet from the actual Nardwuar, sitting in the front row. I guess that aspect of the experience won't be replicable on other nights, but if you visit Nardwuar's site, you can probably find his interview with Michael Scholar Jr. about the play, ongoing as I type this. It should be pretty entertaining. (Edited to add: Bev tells me it was some sort of masterwork, that the interview is a must-hear). 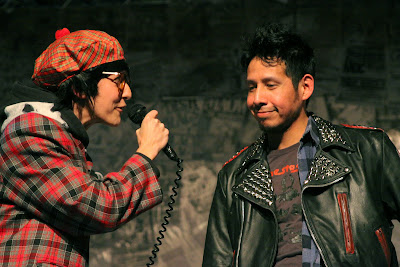 Thanks to Bev Davies, for the great photos! Not to be reused without permission!
Oh, by the way: following the performance of the play, Vancouver's own Mecca Normal plays a half-hour set at the Rickshaw, on Friday, February 4th, at 10:30 pm. Admission is free with a Hard Core Logo: Live ticket stub from any night, or $5 at the door!
PuSh Festival http://pushfestival.ca/shows/hard-core-logo-live
Mecca Normal New 7" K Records:
http://www.krecs.com/Shop/product_info.php?cPath=38&products_id=4630
Newsletter http://meccanormal.wordpress.com/
Posted by Allan MacInnis at 3:59 PM