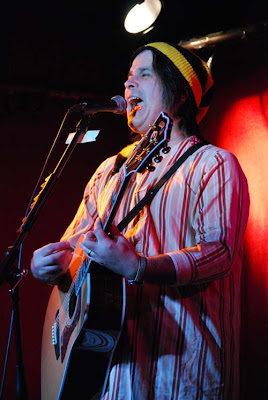 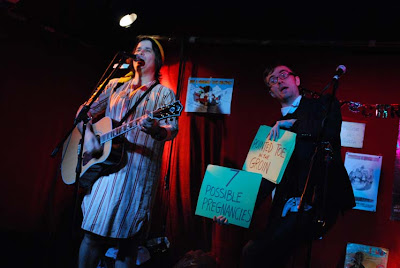 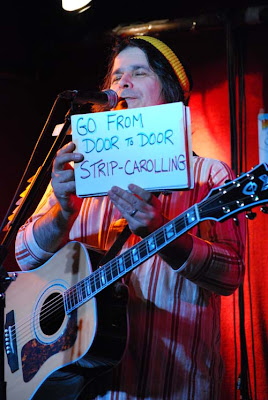 All photos by Femke van Delft, taken at No Fun Alone At Christmas 2008. Not to be RWP, etc. Guest in middle photo: Michael Unger, of comedy duo the Skinny

Turns out that there's a Tom Harrison interview with David M. in the Province today. In it, you will, at the very least, learn what the M. stands for (but not how to pronounce it). Tomorrow night at the Railway, it transpires, marks the 25th anniversary of No Fun Alone at Christmas in Vancouver (and its less isolated "No Fun at Christmas" variant, when Paul Leahy, the other official half of No Fun, plays - tho' David does have guests for this, and all, No Fun Alone at Christmas shows). While I actually prefer my No Fun songs in non-seasonal garb, and am in particular hoping to catch No Fun on Drugs* someday, since I've never seen that particular show, I think I need some beer, soon... so tomorrow night sounds like a good night to head down to the Railway (which, incidentally, is one of the top three Vancouver watering holes singled out for praise by homebrewer extraordinaire John Wright, of Nomeansno and the Hanson Brothers, when I asked him to recommend local beer-drinkin' establishments to German tourists, for a German Nomeansno article. The other two were the Steamworks and Yaletown Brew Pubs!). I really, really hope David will do some sort of rendition of "Work, Drink, Fuck, Die" - it's a song my heart is cravin' at the moment! 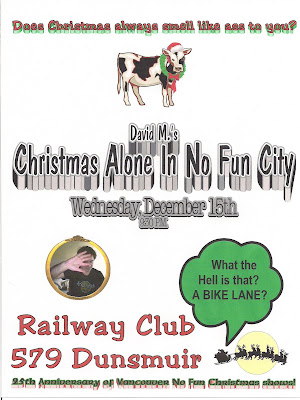 *Or, I suppose, the solo variant, No Fun Alone on Drugs, which has even more bathos to it, no?
Posted by Allan MacInnis at 10:10 PM