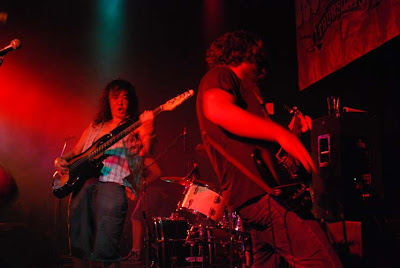 Bison BC by Femke van Delft, not to be reused without permission


Vancouver's hairiest band, Bison BC, make another foray into the Biltmore on December 10th - the first gig there since a bandmember's injury, a few months ago, caused a cancellation to a show that I gather was sold out (lots of tickets still available for this one, I'm told). 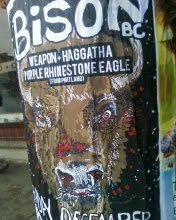 I have no idea if the Skinny website, which has mutated considerably, is still hosting my old Bison articles anywhere; portions of a couple of my conversations with the band, about Quiet Earth and Dark Ages, were edited together for Germany's Ox Fanzine a few months ago, but since the "complete piece" has never run in English, I've posted it on the Big Takeover website. Why the heck not - give the boys some more exposure worldwide. Listened to Dark Ages today on the train, actually. It's such a serious, moody, heavy and bleak album that I confess, while respecting it, that I seldom spin it, finding it actually a bit of a bummer; but there are some amazing songs on it no less (I'm particularly partial to the first two cuts, "Stressed Elephant" and "Fear Cave"). I think I'll only be able to see one final show before 2011, and I think this is going to be the one.

Unless it's a metal or a punk show in Maple Ridge... there was a very interesting one just last night...
Posted by Allan MacInnis at 5:10 PM