I don't really care about Christopher Nolan's films, but I've somehow managed to see all of them so far. While Following and Memento were both interesting enough, Insomnia was just another mediocre big-budget thriller, and I really did NOT like his two Batman films, which - especially The Dark Knight - seem to me to vie with 24 for being the most politically irresponsible works of popular culture of the Bush II regime (my original rant on that film is here; I have not revisited the film, to see if I feel the same way about it, though I did try, out of morbid curiosity, to take in Nolan's first Batman, as well; in addition to finding it politically distasteful, I found it rather dull, and didn't finish it). Still, I haven't walked away from his movies altogether. In my neverending quest for "good movies to watch with my mother," I recently tried The Prestige on her, and didn't mind it - though I don't think I enjoyed anything about it quite so much as the idea of casting David Bowie as Tesla (not his performance, mind you, which is by-the-book and unremarkable, but the idea of it). Cinema as magic, the desire to make people believe - Nolan seemed to be trying to make a self-reflexive fable of his film, which I didn't entirely buy, but there was certainly a degree of craft at work that I could appreciate.

Tonight, I finally got around to Inception.

A few thoughts: given the success of the movie, there clearly is demand for cinema-as-mindfuck experiences, so I can't quarrel with the film's complexity on the level of marketing; if the only question that matters is, will it sell?, clearly the answer is yes. Still, I was prone to wonder on more than one occasion if the complexity of the narrative - with its various sublevels of dreams, populated by "projections" of the subconscious of the dreamer - served more to obfuscate than enlighten; does Nolan want us to go away thinking about and discussing his film, or is he simply aware that the more impenetrable it is, the more times you'll have to watch it to figure out what's going on? There used to be an old t-shirt slogan that read, "If you can't dazzle them with brilliance, baffle them with bullshit;" I am not convinced that it does not apply in the case of Inception.

Secondly, so much is attempted by the film, narratively - deftly shifting between different "dream levels," where a host of characters are fighting multiple battles, or undergoing multiple crises, simultaneously - that the sheer density results in a feeling of rather incongruous tedium. One senses you're supposed to be sitting on the edge of your seat, but I was slouched back on the sofa, feeling numb. It was almost like watching the chase scenes in Spielberg's Minority Report, which are boring precisely because Spielberg never manages to make either the characters or the narrative significant to us; it's just another movie with footage of Tom Cruise being chased, yet more sound and fury signifying nothing. The only difference is, with Nolan's film, you have to work a whole lot harder to hold all the narrative threads together, while caring not a smidgen more... Add to this a related complaint, too, about the ridiculous amount of gunfire in the film - I personally have never even SEEN a gun in a dream, that I recall - and a brief whine about the excesses of contemporary special-effects cinema (it appears that anything is now possible in cinema, but that doesn't mean it's interesting) and you begin to get a sense of my boredom.

Thirdly, it was interesting that almost everything I did kind of like about Inception reminded me of William Gibson's Neuromancer. It would be probably be interesting to sketch out the parallels. More work than I intend to do, but I wonder if anyone else has gone there? (edit: yep). It comes closer to plagiarising Gibson than any other film I'm aware of.

All that said, I actually enjoyed Inception more than anything Nolan has done since Memento. There does seem to be some deeper meaning gotten at in the final sequences; while I still find the film noisy, cluttered, and excessive, I am almost prepared to believe that it is sincerely intended to be "about" something - that it has actual, useful CONTENT, in the suggestion at the end, say, that the film is about the fragility of human experience, with the rather nice image of "building a house on a cliff." Those who want to find things to think about in Inception - who are less skeptical than I that it's worth the effort - might find it a fertile starting point for something, and I must not begrudge them.

...Plus it's always nice to see Pete Postlethwaite in a film, even if he's badly underused...

However, for anyone who cares, I'd like to recommend a much, much better movie in which people enter other people's dreams - a rather delightful, archetypally-rich gem from the 1980's called Dreamscape, which I only discovered this year, picking it up on DVD simply because Max von Sydow was in it. (I'll watch anything Max appears in - hence Minority Report, by the way). It begins with an astonishing nuclear holocaust nightmare sequence that will resonate for anyone who grew up during the Cold War; it's very effective and politically rather bold, for a movie that is aimed at a relatively young audience: 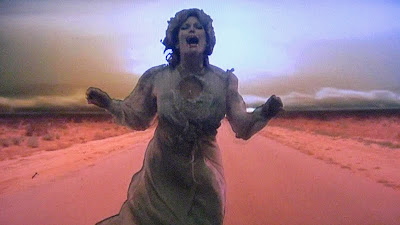 The story involves a US President (Eddie Albert) who is plagued with nightmares of nuclear war. Dennis Quaid is an arrogant, cocky, morally naive but fundamentally virtuous young psychic, wasting his talents on picking winners at the track, who is brought in to help enter the President's dreams. Max von Sydow is the mostly benevolent scientist/ father figure who guides him. Christopher Plummer is the Deep Government spook who is horrified what peace will do to his business; David Patrick Kelly ("Warriors... come out to playyy-ayyy") is a rival psychic that Plummer is grooming for his own purposes. Kate Capshaw, the only wasted performance in the film, is a non-credible love interest. While the film does have an innocent cheesiness to it - a friend aptly described it as the sort of dreck he would have loved when he was 11 - it also has interesting ideas, which it is humble and engaging in presenting, as opposed to the noisy arrogance of Inception; if you can get over the naivete of having an anti-war American president (during the Reagan years, no less!), its politically quite acceptable, and I've no doubt that a Jungian with an interest in dreams (and hero's journey stories) could find much to say about the relationships between the various father figures and sons, in the film - Plummer and Kelly versus von Sydow and Quaid (tho' I won't attempt to further fake that perspective myself). And most significantly for a fan such as myself, Max von Sydow gives one of his most charming performances, from a period where he must have felt great delight at where his career was. Some of his monologues resonate directly against those about dreams in Tavernier's La Mort en Direct (aka Death Watch, the mutilated, shortened English language version), another under-seen gem of the 1980's (also featuring Harvey Keitel, Romy Schneider, and Harry Dean Stanton!). These are idea-rich science fiction films that I respect and love; Inception, while not without a few interesting aspects, is mostly just a noisy piece of commerce.