Gigs this weekend: Bison BC, Little Guitar Army, Theocide and Without Mercy... and more! 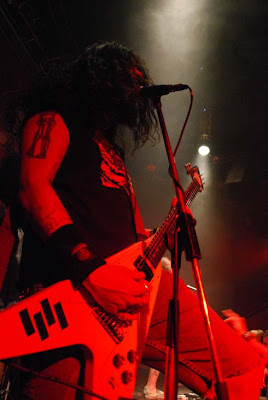 Dan And of Bison BC, photo by Femke van Delft, not to be reused without permission


For a mid-December weekend, there's a lot happening in Vancouver over the next couple o' days.
As noted below, Bison BC play the Biltmore Friday, with Weapon and Haggatha (I must say, I like their self-description on Livevan.com: "First the Earth cooled, then the dinosaurs came...then HAGGATHA arrived and shit all over your mind.") What really shits all over my mind, actually, is that the Bison show tomorrow is not sold out, but the Roger Waters gig at Rogers Arena is. I saw Waters in Tokyo about ten years ago, to please a Pink Floyd-loving friend, and must say that, while he has written some decent songs in his day, the performance was among the most uninvolving I've sat through - with Waters walking rather blandly back and forth across the gigantic stage with his bass, practically invisible behind his celebrity aura, occasionally gesturing at to the audience to cheer, as video of his glory years played on a gigantic screen overhead. Lou Reed, when I saw him in Japan, ignored his "hits" in favour of jamming out with Mike Rathke on current stuff, only tossing in a mercifully hurried, "let's-get-this-over-with" encore of "Sweet Jane" and such at the end so no one could bitch; but Waters, on the other hand, cranked out, for over two hours, exactly what the audience expected and demanded, without a trace of in-the-moment inspiration, passion, or spontaneity: the aural equivalent of a wax museum, the sanctified status of which completely erased what was "actually" happening (an overblown but meticulous performance of some songs that for the most part have been played far too often) and replaced it with the Grand Message of the night, that Baby Boomers Rock. (Yawn). It WAS nice that he did "The Bravery of Being Out of Range" - which is the last song he recorded that I have actually listened to by choice a couple of times - but even that will make way for The Wall tomorrow - an appropriately monolithic title, given what it's become. I loved The Wall as much as anyone when I was 13, and have never seen it actually performed - but tomorrow, if I decide to stay in the city and see a show, I'll be at Bison. Tear down The Wall indeed! 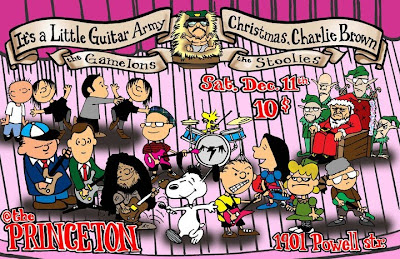 Saturday is a little harder to figure, since there are a couple of conflicting events. The Little Guitar Army are having their Christmas show, for one. Doug Smith sent me a couple of posters - one for the show by Rev Rot n Hell, and their "2011 Miss Feb shot for the Isotopes hockey calendar, with partial proceeds to a Britannia Community Centre hockey program for underprivileged kids!" (Photo by Rebecca Blissett). By the way, I'm not sure who the Stoolies are, but I gather there are ex-Slow/ ex-Tankhog members in the lineup - am I wrong about that? 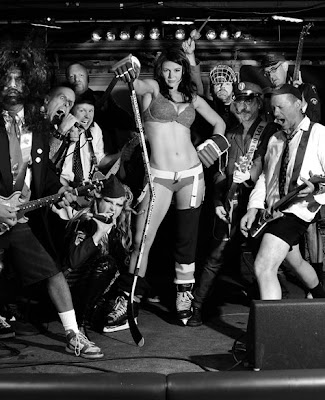 Doug further tells me "we have 3 songs available on itunes and all the digital sites ('30 Watts to Freedom,' 'Can't Fix Stupid,' and 'Jack Pike')" whilst he works out a deal to release their first, much anticipated record. Spring may see them doing another video and releasing a few more songs for download; if you haven't seen the "30 Watts to Freedom" video, it's a must. Now THAT's living culture.

Shocking to say it, but while I am considering actually seeing a few shows in the city this weekend, I'm not sure the LGA will be one of them. Neither, I suspect, will be Chris Walter's booklaunch for Sins of the Poor at Funky Winker Beans, featuring Alcoholic White Trash and Aging Youth Gang (comprised of former members of Curious George and the Spores and... and, hm, also including Nick from Little Guitar Army. I guess he's going to have a busy night)! Good bands, and I've long been a supporter of Chris, but if I am lucky enough to be seeing live music in Vancouver on Saturday, I think it'll be the metal show at the Rickshaw, 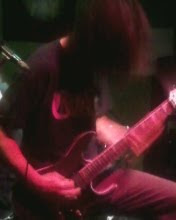 featuring Fallen Decade, My New Enemy, Until Dawn, Theocide - who are pictured to the right, giving a very energetic and entertaining performance at one of the Maple Ridge church venues that rents out to live shows - and Without Mercy, whose CD I've been enjoying, but have never seen live. Like Arch Enemy, they're one of those metal bands whose singer - buffalo-throated and fierce - you would NEVER guess from the music is in fact female. I will be studying Ms. Alxs' larynx from the pit, trying to spy abnormalities that might make it possible for a woman to sound so goddamn tough. It must be at least LARGER than your average female's... I do not know how she does what she does without her throat exploding in a spray of blood.
My apologies to China Syndrome's Tim Chan, who seemed a damn nice guy when I met him at the Alex Chilton tribute, and who did some perfectly credible Chilton covers, both with that unit and 64 Funnycars; while there is some question of where I will be Saturday, I will not be at the Railway Club, where China Syndrome will share the bill with Weathered Pines and others. There was a period in my youth when it would have been otherwise, but what I crave right now is metal, not smart independent pop. Those of you who feel otherwise know what to do.
Friends of mine who crave avant-garde electronica, meantime, will be at the SquareWaves festival, as written about in the Straight by Alex Varty. The show portion of the two-day event is at the new Blim location, 115 East Pender Street, which is so big and nice that I had to step inside and gawk briefly the other week; it is the best Blim yet by far (tho' the space in that office building by Cinemark Tinseltown still has a certain charmed spot in my memory). Magneticring performs Friday night, with Josh turning up at the modular synth symposium on Saturday. I begrudge no one thinking this is a cooler event than a buncha metal and rock shows.
Wherever you go, have a good weekend, folks. Ain't it nice to have so much cool stuff to choose from? 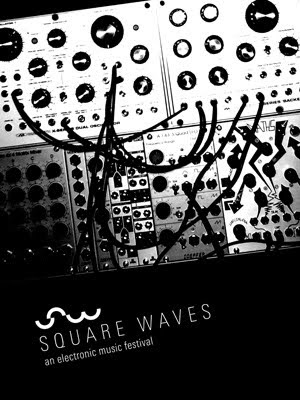