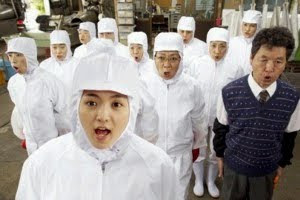 The highly-praised Japanese film Sawako Decides resonated with me a little more than I expected - involving, as it does, someone returning to their hometown in the midst of family troubles, contending with their father's death, and struggling with redefining themselves. Of course, the lead is a woman, she's about 20 years younger than I am, and her new role is looking after her father's freshwater clam packing business, not her Mom (who is absent save for a photograph). Still - I laughed, I cried, y'know? It's a very fresh, funny movie and the character of Sawako - who seems to derive weird courage out of defiantly resigning herself to her slightly-below-averageness - is delightful. I'm pretty sure I can get behind the message, too, a slightly ironic celebration of the "gambatte" spirit, which, in other contexts, might make me want to kick someone. A brief nod to the Tora-san movies actually got a titter out of a few people in the audience!

The German film Transfer, meanwhile, would have made an excellent 1970's hard SF novel; it's idea-rich, provocative, and has a highly intellectually stimulating premise: via a new medical procedure, a wealthy white couple are given the opportunity to "transfer" their personalities into the young bodies of two Africans, who have sold themselves into service to help their impoverished families back home. The Africans get to inhabit themselves for four hours a day, while their new owners are sleeping; they have their own feelings about what they're experiencing. The guide gives an excellent description of the film, though really, if you're intrigued, I recommend just seeing it; it's not an overwhelmingly exciting experience - I won't be buying the DVD - but I was most entertained by it, am glad I went.

Amusingly, I got my theatres crossed for the screening and was sitting in the wrong auditorium, wondering why Transfer seemed to have attracted a very large lesbian crowd (there were doubtlessly several gay men in the audience, too, but the lesbians were more noticeable). Then the MC welcomed us to the screening of Stonewall Uprising and I quickly checked my ticket stub... Oops! Speaking of gay fare at the VIFF, tho', the current Xtra West has my L.A. Zombie/ Bruce LaBruce interview. More of that here presently...
Posted by Allan MacInnis at 2:19 AM