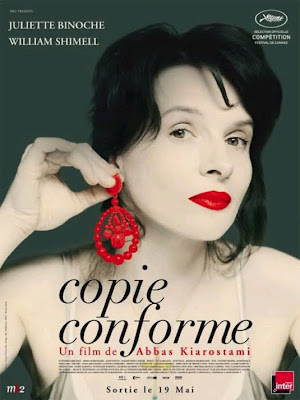 ...I'm running out of steam, have a sore back, and other pending projects, so these will likely be my two final comments on VIFF fare this year. I had an amusing experience with Abbas Kiarostami's first "international" film, Certified Copy, today (it plays again on Thursday). The film plays a rather sly game with its audience; people who intend to watch it and value a fresh experience shouldn't read further... The title and the opening scenes raise questions of the "objective" value of originals versus the "subjective" value of fakes and copies - defending the second and querying the value we place on the first. (This is a very crude approximation of the theme of the film - I'm tired, it's been a long day, and this is not an altogether simple film to describe). It then frames a relationship between two people that could be interpreted in one of two completely incompatible ways. Both myself and the people I went to the show with were somewhat non-plussed at the end of it all, confused about what we had seen and what it amounted to. I couldn't immediately enlighten them. As we shuffled out of the Visa Screening Room, I encountered critic and VIFC programmer Tom Charity in the lobby, also fresh from the screening, and rather unfairly - since I was myself dazed - asked him what he'd made of it; whereupon he made an observation that, to my surprise, favoured a reading of the relationship shown onscreen that completely clashed with mine. It wasn't until I discovered that he'd seen it in an entirely different light that I realized what had happened - the film had offered us two paths, and he went down one, while I the other, finding ourselves at an utter divide, the filmmaker having offered both of us ample evidence for our views (this understanding, I should note, took place mostly in my head, not in conversation, so Charity might be entirely unaware of my reaction). And then suddenly it all fell into place: we were, ourselves, in trying to sort out our incompatible interpretations, in fact discussing which version of the relationship was authentic and which was fake; we were caught up in a miniature version of the very dialogue about experience that the film frames. It was an entertaining experience, having a penny drop so dramatically five minutes after the film had ended. Confusion has never so completely transformed itself into understanding in quite the same way.
Unless I'm still confused, and just don't realize it.
Aside from questions of epistemology, however, the insights the film has to offer about human relationships or experience probably can't be decisively stated by ANYONE after a single viewing; but the performances are strong, Juliette Binoche is very sexy, the Tuscan scenery and the photography are quite lovely, and there is something highly entertaining about the "game" it plays, if I can call it that... so I think I can recommend the experience. It may be awhile before I give it another look, but at some point, I may well do so - I have lots of other Kiarostami to catch up on, in the meantime. 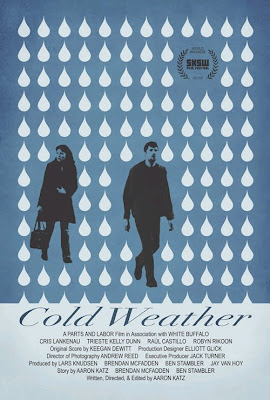 I felt equally uncertain about Aaron Katz's Cold Weather. It's an odd little film - it has more plot than any so-called mumblecore film I've seen, with the possible exception of Baghead, but it stands at an ironic distance to that plot, treating it almost like something akin to the games played by the young couple in Quiet City. It was agreeably funny, possessed of at least some of the character-driven tenderness of Quiet City (tho' little of the emotional intensity of Dance Party USA, which is still the Katz film I most admire); and there were some striking images of Oregon, making it yet another highly interesting independent film made in the Pacific Northwest. I'm not sure that the film does justice to any one of its three levels (the "plot," the metacinematic querying of plot, or the gentle character-driven stuff that the plot engages and/or overtakes) - I think Baghead much more elegant, and not entirely dissimilar - so in the end, it seemed a bit "light;" but it was undeniably highly entertaining.
By the way, I'm told The White Meadows is a work of genius by a friend with pretty solid tastes.
Hope y'all are enjoying the VIFF. Watch this blog for a Jello Biafra interview!
Posted by Allan MacInnis at 1:06 AM