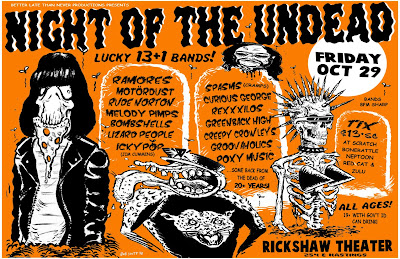 It's a good time to be a fan of the Little Guitar Army (Myspace-Facebook-Straight article). They have the most entertaining live show I've seen locally since I last saw... who? Have I seen a more entertaining live show in this city? They have a bazillion members, mostly playing cute li'l teeny guitars; a flare for goofy costumes; a sexy and insanely energetic (energetically insane?) female vocalist (one Linda Stang); Nick of Aging Youth Gang and Gnash Rambler; Tony Bardach of the Pointed Sticks; and damned if I know the CVs of everyone else... but anyhow, they put on a bloody good show, they have a new album (30 Watts to Freedom) in the works, and there are a few events involving them upcoming: a Halloweeny-type concert on October 30th, another that LGA honcho (or so I gather) Doug Smith has put together that involves the return of Curious George (of "Pit Bull Attack" fame); and on November 6th - I'm not sure how public the event is, since "space is severely limited" - a video launch for their first rock video, at Tony Bardach's artspace, THE DENTAL LAB, located at 1125 E. Hastings Street. I've only seen'em three times... maybe I'll be able to make it out to some of these events... 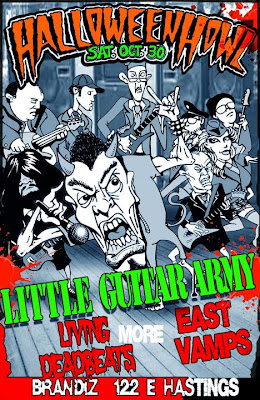 For fans of a vastly different style of music - electroacoustic experimentation, electronica, and so forth - y'all should check out the Vancouver New Music portrait of local composer Barry Truax, happening November 19th. Couldn't get their poster to load properly on my blog, but here's the full press release for that event. (That's it - my writing is finished, you're now alone with the press release. Don't do anything too naughty to it).
Vancouver New Music looks back over Barry Truax’s impressive 40-year career in music. Truax is a composer of national and international acclaim, and has pioneered some of the most groundbreaking work in electroacoustic composition. Vancouver New Music is pleased to present the first full evening concert in Vancouver dedicated entirely to the work of this city’s most celebrated composers.
The evening will feature a retrospective of Truax’s works, beginning with Riverrun (1986), a now classic work that introduced the technique of granular synthesis to the world. The audience will also be treated to the world premiere of excerpts from Truax’s forthcoming music theatre work Enigma, The Life and Death of Alan Turing.
Enigma, The Life and Death of Alan Turing is a music theatre piece in five scenes, written for three singers, a dancer, and six-channel electroacoustic soundscape. Vancouver New Music has commissioned the first and last of these scenes which will be premiered this evening, and will feature performances by Will George (tenor) and Catherine Laub (soprano) of the Vancouver art-song chamber collective, Erato Ensemble. The performance will also feature a newly commissioned solo dance work from up-and-coming choreographer and dancer Josh Beamish. Enigma takes its story from the facts and words of Turing’s life, as well as poetry from Alfred Lord Tennyson and others.
Alan Turing (1912-1954) was a British mathematician who has been widely recognized as the father of the modern computer. After his death Turing became famous once his role in deciphering the German “Enigma” code during World War II finally became publicly known; this work was key to the British war effort in the Atlantic. In 1951 Turing had an affair with a 19-year old working class youth in Manchester that eventually led to his conviction under the charge of “gross indecency”, the same crime that Oscar Wilde had been convicted of more than fifty years earlier. To avoid a prison sentence, Turing agreed to the injection of female hormones. A year after his probation ended he was found dead, presumably from eating an apple laced with cyanide. His death was declared a suicide.
Enigma’s first scene takes as its subject a 16-year-old Turing, a precocious youth given to scientific experiment and idiosyncratic behaviour. The scene revolves around Turing and his infatuation with another brilliant youth, Christopher Morcom. The final scene leaps forward in time to Turing at age 40 and takes the audience through his relationship with Arnold Murray, and Turing’s final tragic days.
The evening will also feature a the Vancouver premiere of Androgyne, Mon Amour (1996-97), a music theatre piece originally commissioned by the American virtuoso performer Robert Black, performed here by Arraymusic bassist Peter Pavlovsky (Toronto).
The program includes as well some of Truax’s recent works, including The Shaman Ascending (2004-05), a piece inspired by Inuit throat singing that involves a high energy display of vocal material simulating a shaman chanting to achieve spiritual ecstasy, as well as Chalice Well (2009), a soundscape composition for 8-channel tape. Chalice Well takes the listener on an imaginary journey down into this holy well in Southwest England, passing through several cavernous chambers on its descent, filled with rushing and trickling water. Chalice Well was premiered at the Sonic Arts Research Centre in Belfast.

Barry Truax is a Professor in both the School of Communication and the School for the Contemporary Arts at Simon Fraser University where he teaches courses in acoustic communication and electroacoustic music. He has worked with the World Soundscape Project, editing its Handbook for Acoustic Ecology, and has published a book Acoustic Communication dealing with all aspects of sound and technology. As a composer, Truax is best known for his work with the PODX computer music system which he has used for tape solo works and those which combine tape with live performers or computer graphics. In 1991 his work, Riverrun, was awarded the Magisterium at the International Competition of Electroacoustic Music in Bourges, France, a category open only to electroacoustic composers of 20 or more years experience. He is also the recipient of one of the 1999 Awards for Teaching Excellence at Simon Fraser University.
Barry is an Associate Composer of the Canadian Music Centre and a founding member of the Canadian Electroacoustic Community and the World Forum for Acoustic Ecology.
Posted by Allan MacInnis at 6:13 PM