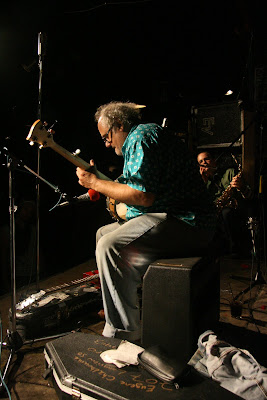 Eugene Chadbourne at his last Cobalt appearance. Photo by Femke van Delft, not to be reused without permission

My absolute favourite living American musician - beating out Peter Stampfel, John Zorn, and, well - anyone else living - is Eugene Chadbourne. He plays The Cobalt on Fake Jazz Wedensdays on August 19th. The Cobalt, of course, has been threatened with closure; it's a damn good month to get out and see some shows at this venue, and this one is going to be exciting indeed (Poib Fehr's duo project, Yellowthief, have an opening spot, which I know Poib is stoked about - he's a fan of Eugene, too). Since The Skinny didn't run it - here's my most recent Eugene Chadbourne interview!

One of the great originals of American music plays the Cobalt on Fake Jazz Wednesday, August 19th. Eugene Chadbourne’s oeuvre straddles eccentrified country and folk, bop, free improv and avant-garde wackiness, cartoon music, and the fucked-up, freak-out psych-rock of his former band Shockabilly. His instruments range from banjo and guitar to homemade oddities like the electric rake, and his collaborators have included Brian Ritchie and Victor DeLorenzo of the Violent Femmes, various members of Camper Van Beethoven, NY post-modern jazz giant John Zorn, and Mothers of Invention drummer Jimmy Carl Black (“the Indian of the group,”) who died late last year.

Amongst the homemade, self-packaged CDR releases that Dr. Chad will likely be selling at the gig - also available through his online House of Chadula imprint - is We Don’t Have This In The Home, from Chadbourne and Jimmy Carl Black’s summer 2008 “Jack and Jim” tour of Japan. Only available through Eugene, this disc includes some Captain Beefheart tunes, a cover of “Smoke On The Water” (“done for the Zappa night in Tokyo, because I was looking for songs that mentioned Frank,” Chad explains on his site) and the original, “I Got More Pussy Than Zappa,” about Jimmy Carl’s success with the ladies. Contrary to rumours that FZ had a ridiculous number of notches on his bedpost, Chad tells me that he thinks “just about everyone got more pussy than Zappa, from the sound of it, but Jimmy for sure.”

I asked Dr. Chad if he had any stories about Jimmy Carl. “I do not really know of one story,” he responded. “It’s the man's whole life that’s so fascinating. He’s the only friend I have had that was not only a drummer but ran a donut shop, painted houses, was in the Air Force, rode in a rodeo... and back to pussy, lost his virginity in Juarez at the age of 12 in a place called Paris de Noche to a woman named Big Bertha.” See Dr. Chad’s website for remembrances of his friend and collaborator.

Dr. Chad’s early concert experiences, in Boulder, Colorado - before he relocated for a time to Calgary, where he waited out the Viet Nam war - included “garage bands at acid parties, and it does not get any better than that. Each song was an hour long.” Since those days, the widely-travelled musician has played “many strange concerts. One that always comes to mind was one of a series in Bucharest, Romania, that came about through student radio after I recorded my parody of ‘Hello, Dolly,’ entitled ‘Hello, Ceausescu.’ I was supposed to play in a room at one of the campuses and about six people showed up, then another dozen came that kept to themselves and looked at me funny, several approaching to ask me questions about what it was like to work with Fellini!” (No, folks, don’t pause puzzled and wonder if you’ve missed something: Dr. Chadbourne has never worked with Fellini). “Then two older men came in, one of them Italian. It turned out the room had been double booked, not only my concert but the film club had first dibs really, and their guest was one of Fellini's cinematographers. The six people that had come for the gig and the organizer and I decided to do the concert in one of the audience member's apartments. She made a few calls to make sure it was all right with the neighbours, then I got on the subway with the entire audience and the organizer and we went off to do the concert at her apartment. Her teenage son hung around making faces the whole time.” 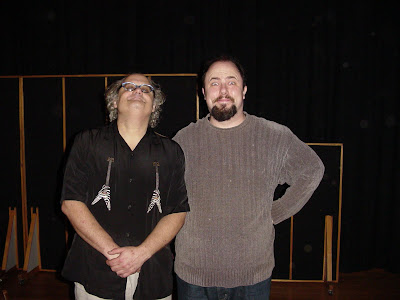 Eugene Chadbourne with Allan MacInnis, photo by Dan Kibke. Not to be reused without permission


“Another good one,” Dr. Chad informs me, was “the experimental music club's show in Tallahassee featuring my chamber music group Insect and Western Party. It was bumped up into an early show so that a heavy metal battle of the bands could take place in the evening. Heavy metal bands subsequently kept wheeling in huge amplifiers through the bar’s swinging doors throughout our set. Meanwhile the bouncer, a bounty hunter, watched our oboe player with rapt attention. He told me later how impressed he was how she cleaned her oboe out during a guitar solo: ‘She took the whole thing apart, cleaned it, put it back together right on time - just like a gun!’"

Camper Van Beethoven bassist Victor Krummenacher, who played Vancouver in July, had said of Dr. Chadbourne, “It’s like jumping off a bridge and not being sure how deep the water is underneath you... I’ve had some of the most transcendent moments of my life playing music with Eugene, in some of the most unexpected places. I think one of the things that I’ve learned from Eugene is to trust your gut, and just go for it. He’s not a man to rehearse - he’s hardly a man to even soundcheck; he just shows up and plays, and you either catch up and go, or you don’t!”

Chadbourne tells me that his distaste for rehearsal has more to do with “desperation and the assumption that most musicians forget everything they rehearse, anyhow;” but he does still have to rehearse from time to time. He practices all the time, too - he says he plays guitar at home sometimes “more than on the road.” Still, his career is a model of independence and freedom from encumbrance. Though several of his albums have been released on other labels, many of his early recordings were released on his own Parachute Records imprint, and later, on cassette and CDR. (There are over 60 self-released CDRs available on his website alone). His unique sound, prolific playing and frequent touring have ensured him a loyal following worldwide; while various executives and rock stars fret about plummeting CD sales and the impossibility of making megabucks on today’s music industry, Chadbourne is unfazed. “I was never affected by the big music industry because they have nothing to do with me; the changes now likewise have no impact.” He agrees with me wholeheartedly that the wide access to new music on the internet “has improved and widened typical listening taste....that can be printed in marble, it is for sure true and I have watched it. It is only logical,” and comparable to “the impact the underground FM stations had in the ’70’s... All people need is some exposure. In the case of the internet it is even easier, since you are the disc jockey.”

Asked if he had any advice for budding musicians, Chad replied, “I would stand the advice I wrote in I Hate the Man Who Runs This Bar, to develop music that you like to listen to yourself because nobody else is going to want to!” 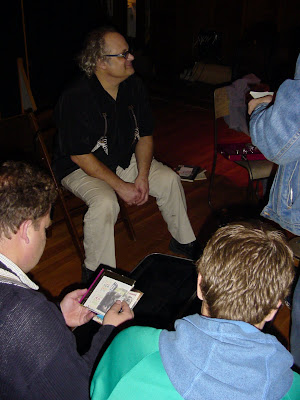 Eugene Chadbourne chats with fans at the Western Front, photo by Allan MacInnis

he is my favorite American also,, nice info in your 2 Doc Blogs, some i didnt know