Eugene Chadbourne at the Cobalt 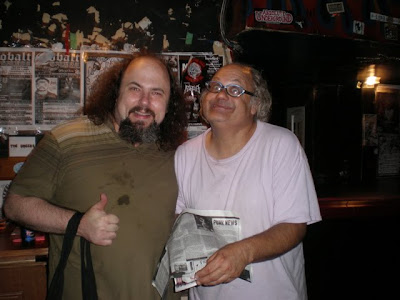 Eugene Chadbourne and myself, by Barbara Pratt! Not to be used without permission.


Doc Chad, my friend Judith, and myself had hung out briefly before the show, catching a meal at The Reef on Commercial. The conversation that transpired was a little dark - touching on the changes the Olympics are bringing to town, the tasering of Robert Dziekański, the Pickton pig farm and failure of police to do much about the "death industry" that grew up around it, the general decay on Vancouver's Downtown Eastside, the sense that there is abundant graft everywhere below the surface of this too-slack city, and the battle to keep The Cobalt open (Dr. Chadbourne: the Tyee article on the Cobalt slumlords I mentioned is here). To my surprise, this conversation seemed to inform Dr. Chad's set a bit - he played numerous songs that touched on themes we'd discussed (for instance, "City Of Corruption," the Yardbirds' apocalyptic "Shapes Of Things," "Hippies and Cops," and a version of "I Hate The Man Who Runs This Bar," with a special titling for the occasion - "I Hate The Man Who Owns This Building"). The darkness, acknowledged, and the fact that the gig was at the imperilled Cobalt, made the show one of the more emotionally powerful Doc Chad shows I've seen, and eventually most of the drunken talkers shut up and got into it (one drunken heckler apparently mistook "Orange Claw Hammer" for "The Wreck of the Edmund Fitzgerald" and called out "Gordon Lightfoot!"). 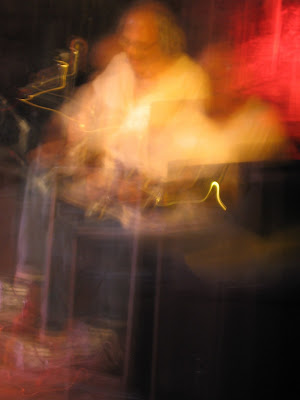 After Eugene switched his electric guitar for a banjo, Dave Chokroun one upped me - not many people in this town routinely do this - by pointing out - I hadn't twigged - that one of Chad's improvs was an Albert Ayler tune. (Dave: which Ayler?). The centerpiece of the night was a very evocative version of "Happy New Year." Thanks, Doc Chad, for coming to The Cobalt, and lending your voice and music to our plight! (Thanks for signing my records, too!). 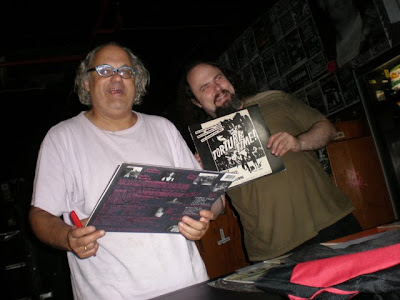 Eugene Chadbourne and myself, by Barbara Pratt! Not to be used without permission.
Posted by Allan MacInnis at 7:55 AM

this guy is a serious fkkn legend.
I saw him in Calgary with a bunch of hippy burn outs and he blew me away!

Al, sweetie, I saw you at that earlier Chadbourne gig, but alas I arrived just in time to see the good Doc had played second and not last so I missed the gig.

Your dinner guest was another was some other woman.

Still, nice to see my name in print (ha ha)

How are things goin' with you?

Ah, but Judith - there are TWO Judiths in my life! (And one of them WAS at this recent Chad gig... in fact, she put the doctor up for the night...).

Sorry about the presumptious mixup.

I hope your Mom's doing okay and I do apologize for asking for your number yet again, but it vanished and I wanted to connect.