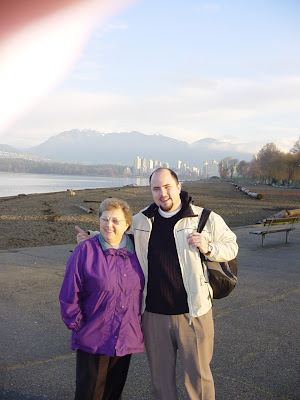 My mother and I, a few years ago on Kits beach. Photo and thumb by Larry MacInnis (hi, Dad!)

Hey, y'all.
There's been a family emergency. My Mom has had a stroke. She's in the hospital. I've just been told today. She's recovering okay, it seems, but I gotta tell y'all... I'm about to disappear for awhile. Gonna clear up some perceived commitments to other folks and plug a few shows before I do that.
If I could, I'd do something on, say, the Minimalist Jug Band's CD release, August 20th I think, also with Petunia, Rodney Decroo, and others... I'm not absolutely sure WHERE that's happening, but I'd start with Cafe Montmarte or Slickity Jim's. If you haven't seen Al play, and like creative lyrics with dark humour and a bit of a confessional streak, you really oughta go. You should search out my past interviews with Al, also on this blog, too. He's one of my favourite performers in Vancouver, no lie.
Also, if I could, I'd do something on the two big SNFU shows happening - August 14th at the Cobalt, a must-see given the Cobalt's impending closure, and their opening gig September 25th at the Commodore with DOA. There's a more-interesting-than-usual reason for seeing SNFU: the documentary on Chi - Open Your Mouth and Say... Mr. Chi Pig, will be debuting at the Cinematheque on September 1st. (It won't be on their website, since it's a rental, but it's at 1066 Howe... I trust y'all can figure it out).

Then there's Os Mutantes September 3rd at the Commodore, Daniel Johnson September 5th, Bison BC with Three Inches of Blood at the Commodore Sept. 11th, and so forth. All exciting stuff. I would also write about Yellowthief, the exciting, stop-on-a-dime avant-rock project involving Poib Fehr, a young guy around town of much promise. Yellowthief will be opening for Eugene Chadbourne at Fake Jazz Wednesdays on August 19th. GO TO THIS SHOW.
I don't think I'll be writing about any of the above, though, or writing much of anything else for awhile. Hell, I may not be even SEEING these shows.
I just put up two features on Eugene and on the New Model Army, who plays here October 8th; I have a bigger than usual commitment to the NMA, since I'm the guy responsible for the Vancouver gig, kinda, but I also think they're a great band that everyone who likes guitar-driven rock music with smart, smart lyrics owes it to themselves to see. Also check out The Skinny's New Model Army contest! - win a spot to open for the band - and visit their website on August 17th for a free download of the title track off their new album, "Today Is A Good Day."
There will be a couple of things by me in The Skinny and The Straight, maybe, that have already been done or that I'm going to square away today.
Otherwise, folks... that's it for me and my blog for awhile, I think. Nice to know y'all, thanks for reading, but I'll be away for a bit. Thanks to those who are offering help or support, but rest assured that I'm not shy about asking if I need it; I would rather maintain radio silence for the time being, so I can focus on family and so forth.
Posted by Allan MacInnis at 7:07 PM

Hey -- sorry to hear about your mom. Best thoughts and wishes to you and your parents.

I enjoyed reading about your July 4th trip with them.
- Tim/Seattle

Aw fuck! Allan, I hadn't read your blog since Aug 6th. had no idea about your mom's stroke. I'm so sorry that happened.

Obviously when I emailed a few minutes earlier I was reading from from the top down.

That really sucks (I'd been through it with my folks too)