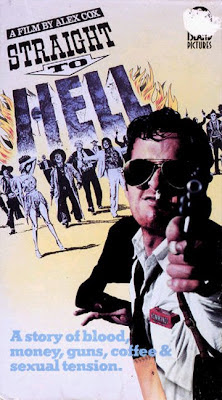 I've always retained a fondness for Alex Cox's much-maligned spaghetti western sendup, Straight to Hell, starring Sy Richardson and Dick Rude (from Repo Man), Joe Strummer of the Clash, and Hole's Courtney Love - I believe from before she was in Hole. I hadn't seen the film in years, and had my doubts about how well it would hold up, but I was happy, when I stumbled on a cheap used DVD, to pick it up. Watching it, I discovered there's a sequence that has permanently secured its place in mah book of love and fondness: in minute 43, there's an ironic quote from Pasolini's Salo: The 120 Days of Sodom (a character is looking through binoculars as two men hold a third down and brand him, as he writhes in the dust). Anyone who realizes that he can score a laugh from a certain cinephelic subset by dropping a reference to Salo is ALL RIGHT BY ME. (Zander Schloss' "Salsa y Ketchup" was pretty fun to rediscover, too).
As for Clash-related items and news, note that Mikey Dread just died, at age 54, of a brain tumour.
Posted by Allan MacInnis at 10:08 PM