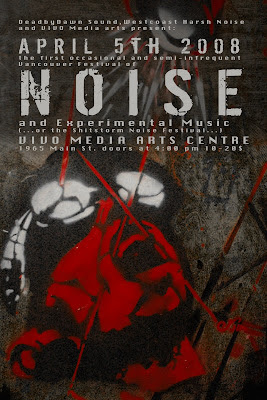 Do you enjoy listening to music that makes your whole body throb and thrum?
Is punk rock not punk rock enough for you anymore?
Do you own Tunnel Canary's Jihad CD? (I bet you don't).
Are you a sonic adventurer? An athlete of perception? Are you fascinated by that odd ringing in your ears?
Do you want to pick up cute noise chicks? Do you have a fetish for men with piercings in unusual places?
This is for you. 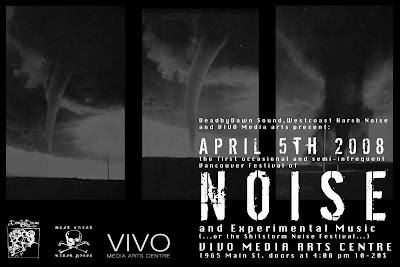 DeadbyDawn Sound, Westcoast Harsh Noise and VIVO Media Arts present:
Saturday April 5th 2008
the first occasional and semi-infrequent Vancouver festival of NOISE and experimental music
(...or the Shitstorm Noise Festival...)
at VIVO Media Arts Centre
1965 Main StreetVancouver B.C.
10-20 sliding scale admission at the door
starts at 4:00pm, ends late
There's something like 37 bands playing at this fucking thing. The usual suspects apply - Flatgrey, Sistrenatus, G42, The Rita, Taskmaster, Ken Roux, Totally Ripped, Ejaculation Death Rattle... plus there's a host of visitors and people I have not heard before, with delightful names like Quim, Brutophilia, Fistopia, Blue Sabbath Black Cheer, Ghost Taco, and far, far more... I am told that performances will be fifteeen minutes long or so, except for the revitalized Tunnel Canary, who get 20 minutes. (Remember the line in Constantine about how two minutes in hell is an eternity? 20 minutes of Tunnel Canary is enough to scar you for life, don't worry). Things will start out with a new documentary about Tunnel Canary and their importance in the Vancouver scene (they are the Ur-band of Vancouver noise, active in the late 1970's and early '80s). Did I ever tell you that I once saw the Haters play here, back in the 1980's? No, really! 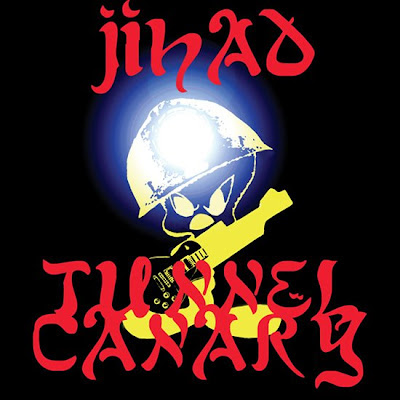 Posted by Allan MacInnis at 7:12 AM