Hail The Rise of The Skinny - and come celebrate 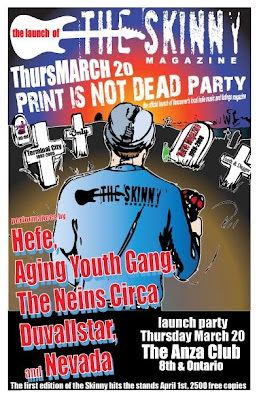 Anyone remember the Nerve Magazine? You know they're kaput, right? (At least for now, but everyone assumes that means now and forever; I suspect given the sudden, shy, weird end to things, which I won't go into much detail about because, like most people, I was kept nearly'n'totally in the dark, it's gonna be a pretty hard trick to resurrect it, if anyone tries). Abuse them as you will, the Nerve a) ran articles about some damned interesting bands, b) housed a number of true believers, c) had more balls and a more distinct style than most other local free rags, and d) published a whole lot of my articles and showed me perhaps even MORE respect than I was due (at least when Adrian or Devon were my editors). And whatever they coulda shoulda oughta mighta done better, and whomever they shoulda tried harder not to piss off, there is a sizeable void left in the city where the Nerve was - if not for you, then for a couple of dozen music journalist types who now have no other way of getting into gigs free.

So a bunch of us have sashayed over to The Skinny, which I assume hits the streets next month, and has no link for a website as yet. I actually don't know a WHOLE lot about the paper at the moment, mostly because I haven't been paying attention, but Vancouver's biggest Budgie fan, Ferdy Belland, and my longtime gigmate, photographer Femke van Delft, are involved (more'n me - I contributed a mere single gig review to the first issue)... as are Bev Davies and a buncha other local noteworthies: some of whom will doubtlessly be at the Thursday launch party for the paper. I have as many questions as you about what the end result will be like: will the Skinny rock? Will the Skinny suck? Will the Skinny float? Will the Skinny sink? Will the Skinny alienate me by introducing bizarre grammatical errors into my prose? I know not, but whatever is in th' cards, THE SKINNY WILL RISE IN APRIL, to greet the season of regeneration and animal fucking, and those of us who haven't been on a guestlist since last November will BE THERE ON THURSDAY TO CELEBRATE.

You just KNOW someone is going to buy a cute stuffed dog for a mascot (and maybe die it black and give it Big Hair). Bwah ha ha. It's so obvious, it might've already been done.
Posted by Allan MacInnis at 10:18 PM

So what is the skinny on where I can find a copy of the Skinny?