Race with the Devil: subtext is everything 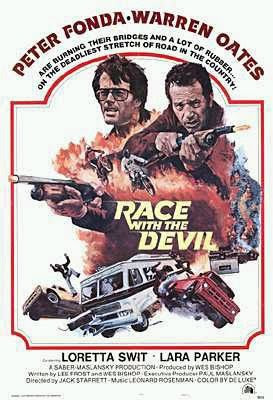 Oh, my God.
So I'm sick, dig, and tho' I didn't go in to teach today - it's hard to teach when you can't talk - I had to spend the day running errands, coughing up phlegm all the while. At the end of the day, totally exhausted, walking back from a meeting, I stepped into HMV to poke around: because if I could find a cheapie DVD I was genuinely curious about, I could keep myself awake for a just a couple more hours and go to bed late enough that I wouldn't wake up coughing (this is the theory) at 3AM.
Hm. Race with the Devil: 70's American cinema that I haven't seen. I examine the box for the umpteenth time. Pros:
1. Warren Oates is in it! (Almost enough, right there).
2. It's from the decade of American moviemaking that most interests me.
3. It's got Satanic sacrifices in it, which is neither here nor there, but if it's good (I genuinely think like this) I can convince Adrian "Deep State" Mack to see it so we can bullshit about it afterwards.
4. And it's only $11.99.
Cons:

2. I've never heard of the director

3. I don't remember Robin Wood OR Carol J. Clover mentioning it in their books, and it doesn't come up in The American Nightmare.

4. And fertile a decade as it was, some American 70's cinema is flat out drek.

I'm barely halfway through - I've paused mid-Satanic-ritual, so I cannot possibly spoil the ending for anyone, because I don't know where it goes - but I think this is THE anti-boomer (self?)-hate movie. What's amazing so far, tho', is that everything that interests me about the film, everything that is intellectually exciting about it, is playing out so subtextually, so quietly, so subtly that no one will actually believe me when I tell them what it's about, even after they see it. ("If one has character, one also has one’s typical experience which recurs again and again." - Nietzsche, Beyond Good and Evil, epigram 70). It is quite possible that if I tried to talk to the filmmakers themselves about it, they wouldn't believe me. Fanboy Quentin Tarantino might go there, or Eli Roth, but who's gonna put me in touch with THEM? (And Carol J. Clover hasn't answered two emails I've sent, so I'm taking the hint).

Robin Wood? Hello? Do you read blogs? I was in CineAction! Notice me!

To understand why this is THE anti-boomer (self?)-hate movie, you have to look at it from two different angles: first, you have to consider the urban-rural horror film, roughly along the lines spelled out in Men, Women, and Chainsaws. Following this template, a group of people with whom we identify - typically middleclass citydwellers from our own country - go into another place, either in their own country or elsewhere, where people lack their luxuries. They behave badly. They (usually) incur, and MERIT, the resentment of the locals. We, the audience members, identifying with these (generally) "ugly Americans" see our own faults and recognize guiltily that affluence and comfort are not fairly distributed socially - the locals are our "victims" and have the right to hate us. But then - this is all paraphrasing Carol Clover, btw - the resentment of our victims explodes into violence, and the people with whom we are identifying with must overcome their guilt and 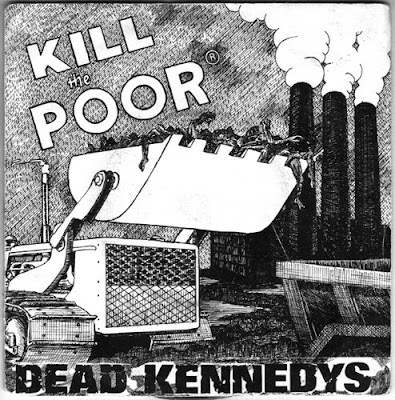 I mean, think of it: how many movies does this sorta thing happen in? There are different variations, different nuances, but, I mean: Deliverance, The Texas Chainsaw Massacre, Rituals, Turistas, Hostel, I Spit On Your Grave, Pumpkinhead, The Hills Have Eyes... All of them explicitly show the people "we" are among behaving distastefully. Think of Burt Reynolds and Jon Voight talking about how their fellow city folk are "raping" the land, or anything that Ned Beatty says or does, in Deliverance; or the spoiled, selfish behaviour of the fratboy kids in Hostel or Pumpkinhead or so forth. We seem to be the enemy, initially - or at least he's among our ranks - but all of them end with Our Representatives On-Screen being forced to kill the underprivileged so that they can return to their lives. It's like a working through of the very guilt that draws us into the narrative: "Yeah, okay, so I've got more than they do, and they've got it rough, and I don't feel good about that, but all the same, if it comes down to them or me, fuck'em!" (Clover goes so far as to suggest the poor must be killed in such movies BECAUSE they make us feel guilty!).

Race with the Devil invokes this formula (and like I said, don't worry, what follows is spoiler-free; you will learn little more about the plot of the film than is already revealed on the DVD case by reading what follows). Oates, Fonda, and their wives are wealthy, successful, newly-established yuppie entrepreneurs, sort of a 1975 version of Kevin Kline in The Big Chill, and they're on vacation in their expensive new motorhome, with their motorcycles along with them. They drive off the road, see a Satanic ritual (and are aware that they might be trespassing - the land might actually belong to the Satanists) and, after being initially titillated by the orgiastic nature of the event, see something they shouldn't. Then the two couples have to flee for their lives, fighting off the Satanists, in hot pursuit.

The thing that's fascinating about it all comes down to Peter Fonda, actually, and Easy Rider. Because you can't put Peter Fonda on a motorcycle in a film made within 10 years of that one without summoning up its memory. I would bet a box of donuts that the Oates role was initially offered to Dennis Hopper.

And yet here, Fonda is no counterculture icon; he's a successful, sold-out Yuppie, whose love of his motorcycle is no more an act of rebellion than his longish hair. At one point, Warren Oates even looks over at him and says, "You're the straightest guy I know," or words to that effect, and while later conversation reveals that Oates means the most honest and upstanding, there is definitely a double-meaning that subtly lingers when the line is spoken. Oates continues to reflect that it's amazing how much money the two men have made in the last five years (again, btw, something you find directly parallelled in a conversation in The Big Chill). You just KNOW that they were hippie poseurs before they cashed in. The Fonda character and his wife, especially, mighta even been at Woodstock - but now they're affluent as can be, revelling in their newly acquired comfort, proud of it (half the dialogue in the first half of the film is the two men bragging about their toys or showing off what they can do with them).

So, I mean, you gotta know that the Satanists are going to be HIPPIE types, right? Because just as poor folks make rich folks feel guilty, nothing could burn the ass of a newly-minted Yuppie than honest-to-God hippie leftovers. (Did anyone see Old Joy? It's STILL going on, for fucksake). The film shows, plain as day, a 1975 division between those who copped out and those who followed the other extreme: the radical drop-out stance of, say, the Manson family.

To make a prediction at midway, there are two possible endings to this film:

1. After a long conflict with the Satanists, the Yuppies will kill them all, via classic urban-rural logic, deep-sixing their guilt and ultimately reassuring the audience of likeminded Yuppie sellouts that they made the right choice. (Everyone should go buy a motorhome!).

2. Or, more pessimistically, boomer self-loathing will triumph, and Warren, Peter, their wives, and their little dog too, will ALL PERISH. Along with their toys, which will be much damaged byt the end of the film.

I can't wait to see how this film plays out. In my imagination, it perfectly dovetails with something I want to convince Sir Mack of: it isn't Scientology or MK Ultra or some hidden wing of government planners that are destroying the spirit of revolution with gaslighting and mindfuckery, driving those who dig too deeply into suicide or madness. It's the sheer nature of our economy, of our affluence, of our venal, all-too-human, what-new-toys-have-you-got-for-me GREED. The revolution is dead because we all have our gadgets, our computers, our internet porn, our MP3 players, our cellphones, our money, our precious little packets of security and pleasure. No one had to brainwash us into wanting these things. We weren't duped - we came here of our own accord, because we WANTED these things. We invited the devil into our lives - we are the bad guys in this story. They may be bad guys too, and the Deep State may have cottoned onto how to play us - it isn't difficult to see what we like and what we want - but ultimately, like X sing in that song - "It's our blood on our hands." It's all our fault!

Where's Charles Manson when you need him?

Time to finish the movie.

Okay, so it gets a bit more complicated in its nuances, and it's a tad ridiculous at times, but there's LOTS to chew on in this film. (And Robin Wood does mention it, but just as a near-typical examplar of the class-guilt urban/rural film, with a western twist). There's also a certain level of incompetence that has to be risen above: for example, there's a line in the script about how the sacrifice occurs on the other side of a river, and this is retained in the film and mentioned more than once, even though the sacrifice takes place on the SAME side of the river, which is plainly visible. (There's even talk of having to cross the river to get to the site, when the police come to investigate the next day - after which everyone just walks across dry ground). Still: this is one cool movie, if you dig at it a bit (and Tarantino cribs from it in Kill Bill Part Two, for what it's worth). See it with the thesis, articulated in The American Nightmare (the film, not Robin Wood's essay, tho' that's good, too) that the horror films of the late 60s and early 70s do much to reveal the underlying tensions in American society at the time, and there'll be no end to the bullshitting this can inspire...

Posted by Allan MacInnis at 8:43 PM