Three of Wands; A Scanner Darkly 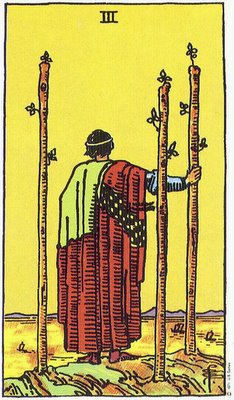 Glimpses of a night: without being stoned, would we ever have decided to draw Tarot cards (one apiece) and meditate on their meanings? Mine was the Three of Wands. It fits perfectly, especially in its invocation of the idea that there is much to be done, and that successes thus far have only been partial.

On other notes, I've been thinking about Richard Linklater's filmed version of A Scanner Darkly. It seems grimmer, more nihilistic than the novel, and somehow this deadens its emotional impact; it should be more powerful, leave you devastated rather than hopeless. Having seen it twice, I think I do like it, but I don't really care about it very much -- it's not part of the problem, but it's never going to be a favourite film of mine, and I can't see myself buying it on DVD. Perhaps it's because there was more hope and creativity and innocence to the stoners of the 60s and 70's, of whom Dick is so fond, compared to the contemporary slackers that bepeople this film, whose drug-taking seems a gesture of complete and utter despair, foolishness, and an absence of options; an innocence gets lost in the translation to the modern day...

...Or perhaps it's that somehow Dick's love for these people simply doesn't translate so well onto screen, isn't being adequately conveyed? Linklater is more concerned with the grim, anti-corporate, anti-surveillance, anti-hypocrisy worldview of the text than what for Dick was probably far more primary. Without said love and sympathy for these characters we don't really feel as much as we could; we observe the film, and perhaps think about it's paranoid message, and maybe even laugh at its episodes, which are more or less faithful to those in the novel -- but the emotional impact is deadened (though the last images DID get to me a little on the second viewing). The grimness of Linklater's vision fairly beats you into numbness, such that when Dick's dedication to the fallen (from the same afterword I quoted below -- ) graces the screen before the credits roll, it seems oddly inappropriate, like it's meant to be attached to some other movie. Oh, does Linklater love these characters, too? Were we meant to? Oh.

And Jerry Fabin, here merged with Charles Freck, never saves the kid when the car falls -- the whole episode is missing. It SHOULD have been in there, but doesn't fit with the Freck we get, who is more or less played for laughs... I dunno. It's not a bad film, but...

I'll need to see it a third time but I think that's my take on it...
Posted by Allan MacInnis at 1:49 AM