A Scanner Darkly Opens Next Week 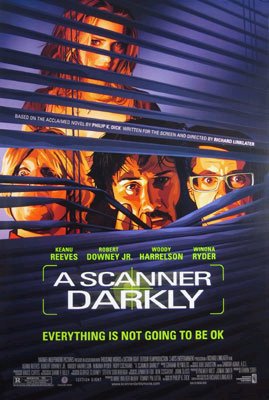 My favourite Philip K. Dick book, often described as his most personal, looks like it's being well-adapted by Richard Linklater; trailers and the official site give me a very good feelin'. It chronicles a descent into drug-induced paranoia and self-estrangement; Dick writes about it, in his author's note:

"This has been a novel about some people who were punished entirely too much for what they did. They wanted to have a good time, but they were like children playing in the street; they could see one after another of them being killed -- run over, maimed, destroyed -- but they continued to play anyhow. We really all were very happy for awhile, sitting around not toiling but just bullshitting and playing, but it was for such a terribly brief time, and then the punishment was beyond belief: even when we could see it, we could not believe it..."

As someone who also has been, at times, very fond of sitting around, getting stoned, and bullshitting with others for hours on end, the book strikes a resonant chord; there is a sadness to it that is very, very difficult to describe, and a fascinating trope is used to explore Dick's ambivalence toward the use of mind-alterin' substances. Vancouverites might be interested to note that after the time period in Dick's life written about in A Scanner Darkly, the author came to rehab in Vancouver, at a place called X-Kalay; it's the model for the rehab centre seen in the film. The film opens next weekend, reviews here; the Wikipedia article on the book, mentioning Dick's biographical background, is here. It's the first commercial release I've been excited about since, well, uh... King Kong. Shh. Think I'm gonna go on Saturday...
Posted by Allan MacInnis at 3:41 PM