Body Count, "Cop Killer," and me 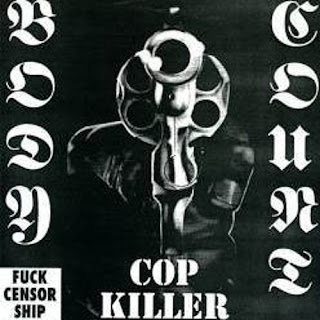 I notice that Body Count has been including "Cop Killer" in recent tours. I assume there was a period - around the time the original CD was recalled and altered - that it disappeared from the band's live set, where Ice-T, perhaps, tired of the notoriety it brought him. It certainly was not included in the vinyl reissue of their debut album that happened a couple of years ago.

It's an interesting song, to say the least. I have a bit of a history with it. I was at a Lollapalooza in Seattle, August 28, 1991. I had slept poorly the night before, was in a pretty wretched state - which I might have augmented chemically, hoping it would wake me up - but was excited to see the Rollins Band live, and the Violent Femmes. As per my norm, I was curious about the Butthole Surfers but a bit afraid of them. I was indifferent to Jane's Addiction, Siouxsie and the Banshees, Fishbone, and other bands on the bill, but I liked music, and I had a ride, so what the hell.

Rollins, to my dismay, offered a homophobic slur about Robert Smith during his set. Someone had pelted him with a shoe, and he was taunting them, and said something - I forget the context - about not being like "that fag in the Cure." The woman I'd gotten a ride with, whom I'd been trying to convince of the merits of Rollins, was a huge Cure fan and pretty sensitive about homophobia. I had records by Fear and the Bad Brains in my collection so I was a little more inured to it at the time, despite occasional queerish inclinations in my youth, but it was still a disappointing moment.  Also, Rollins did one long song about drugs that I found judgmental and offputting, since, back then, I liked drugs a fair bit. I never did see Henry live any time thereafter. I love a lot of what he does, but he seemed like a pretty conservative jock that day at Lollapalooza, and it was offputting.

I don't remember the Violent Femmes set well, except that they did "I Hear the Rain," relevant to the rain pouring on the crowd at that moment; it was pretty funny. The three of them basically stood in line on stage - a tiny presence playing to a huge audience under a very cloudy sky. It was great, but they didn't exactly fill the expansive field with their energy, more appropriate for a smaller venue, maybe. It was also the only time I have seen the Femmes.

I did see Fishbone - don't really remember it, save that it was high-energy and busy (a lot of movement on the stage - I remember spinning trombones and instrument tosses, though this is nearly thirty years ago, so who knows). I took a nap during the Butthole Surfers, in the shelter of the merch tent, because I felt wretched and didn't want to see the films they were famous for projecting - car accident victims, surgery, that sort of thing; I vaguely recall half consciously hearing "Human Cannonball" in the background and closing my eyes, praying for sleep.

I am not quite sure when Body Count played, but before they went on, I had decided to get as close to the front as I could, for whoever was up next, just to have an experience at the concert. I didn't know Ice-T from Kool Aid - I paid no attention to rap. I hadn't heard, or heard about "Cop Killer," I don't think, or else was only dimly aware of it; their debut CD was still nearly a year away from being released, so whatever I had heard was probably hearsay, or maybe a line or two in some alternative newspaper. I don't recall if that was how they opened the show or not, but when that song hit, it was terrifying. I remember people onstage in fake cop uniforms, though the video footage of the show on Youtube doesn't include this (I am presuming this is the same show); maybe it's just the stern demeanor of the band and their mostly black clothing (and shades) that got to me. Having grown up in a quiet middleclass suburb, with almost no exposure to gangs or street culture (or angry, political Afro-Americans, for that matter), I was totally intimidated by the band's tough guy appearance, its apparent advocacy of violence, and completely thrown for a loop by the song lyrics: cop killer, really?

Of course, my father was a jailguard, so that might have had something to do with it, too.

And more terrifying still was the crowd. It was huge. It had a mind of its own. The biggest pit I had ever been in, if it surged to the left, you surged with it; if it surged to the right, there was no way to resist. Packed in, you were trapped, a slave to its mindless will; and then I saw - nightmare of nightmares - a girl in front of me get sucked under. Body Count has a newish song called "Bitch in the Pit," about being surprised to see a woman holding her own in a mosh, but this girl was not that bitch. Stories of people getting trampled to death in concerts flickered in my mind, and my chivalrous instincts kicked in. I dove down to help her up, hauling her up - she looked haggard and scared and grateful. I don't know about her, but after that, I got the fuck out of the pit as fast as I could.

Pretty sure that in 1991, after that experience, I was all in favour of the censorship of "Cop Killer," though it was odd to me, when I finally heard the album, to discover that several of the songs were very rapey and EVERYTHING was violent: funny that it was only cops that people were protective of. I realized it was a reaction to the Rodney King beating (which I'd watched in horror on television) and that racism was a huge problem, especially in the States, but it didn't seem like the sort of song anything good could come out of.

Years later, I found the original version of the CD, with "Cop Killer" on it, in a used CD store in Japan. Of course, I picked it up. And then I came back here to teach ESL classes.

One of the classes I used to teach was a Discussion Skills class, getting students to talk about various pre-set topics. Rather than following the formulae of the curriculum, which had students practicing phrases like "it seems to me" or "so what you're saying is" - gambits - I figured that the best way to develop your discussion skills was by HAVING DISCUSSIONS, by pushing yourself to find a way to express opinions on challenging and unusual topics, which, along the way, provided the students some cultural background to consider. I took a cue from the topics suggested in the curriculum, but decided to go a bit further with them, for the most part. One class, for example, suggested "violence in movies and music" as a theme, but was written around a kind of simple, dull pretext: that exposure to violence in music and movies can cause real life violence.

Does that mean we should censor violent images?

I used the song for more than one class. It actually worked. Despite other teachers teasing me for the chants of "fuck the police" that emerged from my classroom (not said by students, you understand; I did NOT encourage them to sing along, as Ice-T does in the song), and despite a generally conservative management of the school, who gave me shit, once, for introducing a recipe for cockroaches ala king into a lesson themed around cooking, I never had troubles with the material. If we were going to discuss censorship, let's discuss a song that actually was the target of a censorship campaign; and let's choose a song that actually has some heft to it.

So with a class of Brazilian, Mexican, Saudi, Japanese, Chinese, Taiwanese, and Korean students (for the most part), over the course of about an hour, we watched footage of the Rodney King beating; discussed the LA riots; learned about racial profiling - "a pig stopped me for nothing," of which some of the Latino students had direct experience; and then listened to "Cop Killer," uncensored, reading along with the lyrics. Then I got the class to break up into discussion groups and talk about the song: did they think that it should have been censored? Did they think it had artistic or social value? Did it count as a political gesture - a protest song? What was the greater evil, restricting the band's freedom of expression - or perhaps encouraging violence against police and (maybe) stoking the fires of racial hatred and mistrust? Was the song irresponsible, or a reasonable gesture of rage? Did it count as hate speech against the police? What are the limits on freedom of expression, anyway? How would you feel about this song if you were a police officer? (Some of the students, mostly in their 20's, had parents who were in the police, so it was sometimes a personally charged question).

I suspect it remained a memorable lesson for those students, and the very fact that we were using the song to seriously discuss issues in American society sometimes got used as an argument in the song's defense. I've since come around: I'm glad that the song hasn't died, and delighted to see that Body Count is still performing it. (Now they just have to come to Vancouver. All their current tour dates are for Europe).

Incidentally, the last two Body Count albums, Manslaughter (featuring a hilarious and pointed update of Suicidal Tendencies' "Institutionalized") and Bloodlust are really, really great. I haven't followed the band closely, over the years, but I may start. I remember Diamanda Galas once describing Lemmy Kilmister as a "closet genius." I think the same may be true of Ice-T.

I'm really quite pleased to have seen "Cop Killer" performed live, even though it scared the shit out of me at the time.
Posted by Allan MacInnis at 12:21 AM

Oh, and then i went back to the car and napped thru Jane's Addiction and Siouxsie.