Starfish: Upcoming at the Vancity Theatre 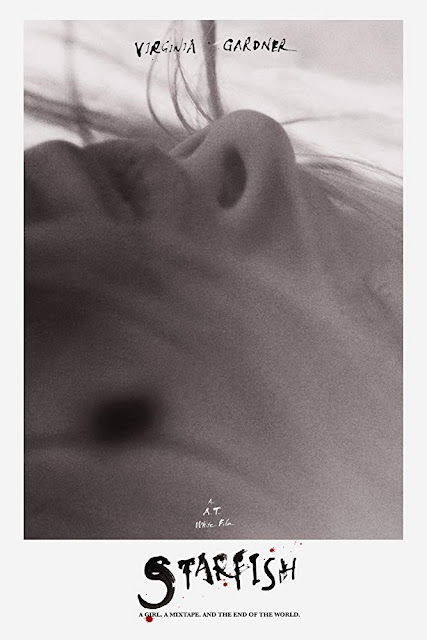 Starfish - playing May 17-23 at the Vancity Theatre - is a curious little film. It's got a somewhat dreamlike pacing and logic to it; I am not fully sure I understood it, but it has something to do with coming to terms with death and loss. It also deals with aliens who invade earth through soundwaves; the two elements fit together perfectly, but I'm not entirely clear how or why.

The story goes like this: a young woman, Aubrey, arrives in a town where her lover Grace has died. They had some trouble in their relationship and there may be a bit of survivor's guilt on Aubrey's part - certainly there are unresolved feelings. After the funeral - which she participates in reluctantly - Aubrey breaks into Grace's apartment, checks in on Grace's pet tortoise and jellyfish, has a couple of hallucinations, then lies down on the couch, where she masturbates and falls asleep. When she wakes up, the world has changed: it's suddenly snowy, there are odd monolithic additions to the landscape, and, as mentioned, there are aliens. By a complex process, Aubrey discovers that Grace knew about the aliens, and the sound signal that opened a threshold to let them into our world; Aubrey is tasked - via a mixtape she finds, which includes elements of the signal - with going back to places that were important to Aubrey and Grace, finding other tapes, and playing them, to solve the puzzle and maybe save the world (hence the tagline on the poster: "a girl, a mixtape, and the end of the world.")

I've left out some details - quite a few, really - but I'm pretty sure I've gotten the above right. There are no other films that I can think of that reminded me (at different times) of both PS I Love You and The Mist;  but neither are the strongest association I had with the film. The movies I thought of most were a few films, associated with mumblecore and the Duplass brothers, that incorporate science fiction and horror elements to get at emotional realities - dramas about human emotions that use the fantastic and otherworldly to unlock their observations about people, like Jeff Who Lives at Home, Safety Not Guaranteed, or maybe even Baghead - none of which are "really" science fiction or horror movies per se. Neither is Starfish. It isn't as "cute" as mumblecore can be - doesn't seem to delight in the immaturity of its characters; it doesn't resolve itself as neatly as any of those films; and it has stylistic and visual surprises (including an animated sequence, and some very good, and also some fairly bad, special effects) that mumblecore tends to lack. But it seems like it somehow belongs with those films - since it's not really an alien invasion movie, anymore than Us is really about clones. It just wants an expanded, at times surreal and fantastical, palette with which to paint its picture, which is really about the reality of human emotion and coming to terms with loss.

Some of it works quite beautifully; there are many touching moments, but the film is at its best when narrative logic breaks down into a sort of resonant, surreal visual poetry. (Plus the tortoise is adorable.) The trailer is here; showtimes (and VIFF description of the film) are here. If you like American independent films, especially ones that play with genre, it's worth your time.

Posted by Allan MacInnis at 3:54 PM