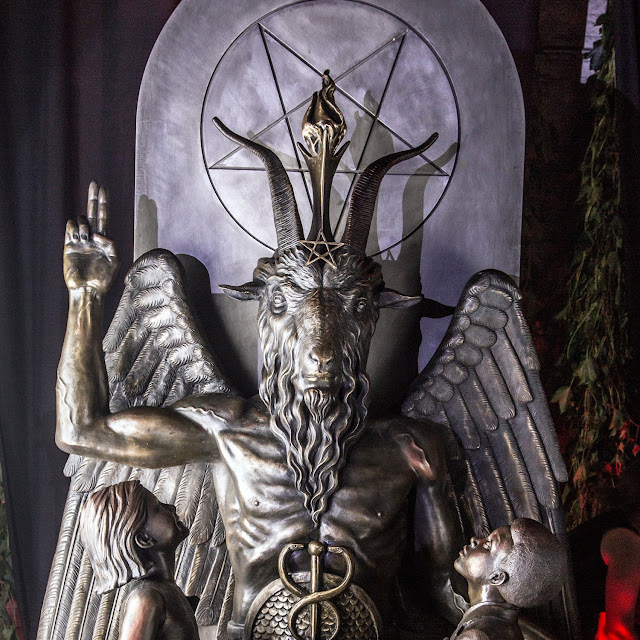 There is a documentary that people need to see, which recently moved from Doxa to International Village: Hail Satan?, about the activism of the Satanic Temple in the United States. These are the people who are using some of the precepts, costume and flair for theatre of the old Church of Satan - the LaVey Church - with a new social agenda, to argue for religious pluralism and unsettle the stranglehold the Christian right has on certain aspects of the American populus and media. They've been doing things like performing rituals - the "Pink Mass" - to turn the deceased relatives of members of the (deeply homophobic) Westboro Baptist Church gay in the afterlife, for example, by having gay people kiss over their tombstones; or proposing to put a gigantic Baphomet sculpture on the lawns of American public buildings to complement 10 Commandments monuments. I hope you've all read those stories, because the actions of the Temple are very funny and surprisingly community-spirited, and usually accompanied with witty quips from members of the Temple, who seem overall a very likeable bunch (for Satanists). There's definitely an elitist element to what they're doing - the doc seems to show them alienating and offending, with their shenanigans, far more people than they're reaching, though the people they alienate tend to be those no-neck American Christians who think Trump is being misunderstood and who likely don't even know what "pluralism" means, and the people they are reaching seem like people you might want to invite to your next party. The whole thing is a bit puzzling to view from a Canadian perspective, because it really only makes sense as  a reaction to a segment of the population - the "we want prayer in school" crowd - that is not so loud or influential up here as it is in the States. But the film is still very funny, is sort of a feelgood movie for punks, metalheads, and other outsiders guilty of our own share of elitism; and it's interesting to see that there are people interviewed in the doc, from within the trans and queer communities, who are enthusiastically embracing the Temple as champions of their acceptance (they must all be big fans of Nightbreed - last mentioned by me in my Jeff Andrew interview on the Straight website). 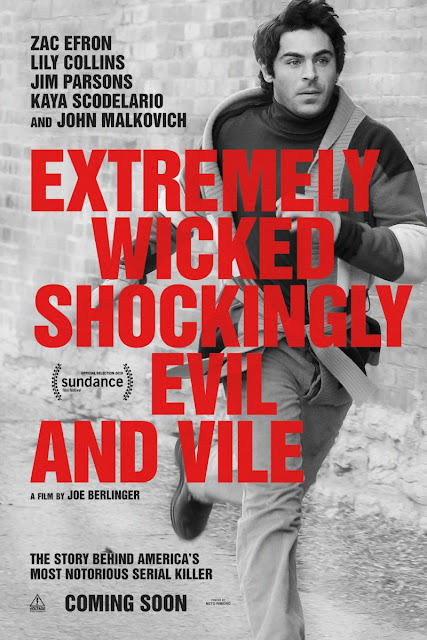 That's not really what I want to write about, however; I just want to single out a moment in the film to discuss a movie that is even easier to access (if you have Netflix, you don't have to leave the house!). Joe Berlinger - half of the team that made the Paradise Lost documentaries, about the West Memphis Three - has a new fictional feature (his first since the underrated Book of Shadows: Blair Witch 2) called  Extremely Wicked, Shockingly Evil, and Vile, dealing with Ted Bundy. The link between the two films - besides this lawsuit involving Netflix and the Satanic Temple - lies in a short sequence in Hail Satan? where the camera includes images of innocents who were accused or imprisoned during the Satanic Panic witch hunts of the 1980's; they include footage - possibly even previously seen in the Paradise Lost films, for all I know shot by Berlinger himself - of Damien Echols, of the West Memphis Three, being led around in handcuffs.

There are two ways that Extremely Wicked... is much more interesting than you might expect. (There is a third aspect to the story, about the hysterical misunderstanding from some elements on the left, who begin at times to resemble the no-neck Christian types mentioned above in their capacity for offence; but it is more unfortunate than it is interesting; Berlinger responds to some of that misunderstanding himself, here). The first is that the film comes as close as one can imagine to being the inverse of the Paradise Lost films: while those films follow three young men who (apparently) really were innocent of the crimes of which they were accused, and who were railroaded and conspired against from within the criminal justice system, Extremely Wicked... tells the story of an actually guilty man who proclaimed his innocence until very near the end, and himself manipulated the media, the courts, and his partners into at least considering the proposition that he was being set up. This raises questions as to why Berlinger took on the project. I am presuming his position has not changed on the West Memphis Three, but it's interesting that he chooses subject matter that so neatly flips that story on its head; even Bundy's female fan club and prison marriage echo Echols' getting married through someone he met while he was incarcerated. Not sure what to make of the parallels, but were I to interview Berlinger - I'm not going to - this would be a question I'd be exploring.

The second interesting thing about the film is that it chooses - and this is the aspect of the film that is being misunderstood - to depict Bundy, for the first hour of the film at least, in the most attractive terms imaginable. Everyone knows, I presume, that Ted Bundy was guilty and ultimately executed - I can't imagine it otherwise - but this film labours to make you forget that and make it possible to see Bundy through the eyes of his loving, supportive girlfriend, Elizabeth Kendall (who has a secret of her own, it turns out, but no matter). The film was, in fact, based on her memoir about Bundy. The fact that Bundy seduces her and has her support through his initial incarceration, and later wins the support of other women, is fascinating and very relevant: properly understood, it speaks to the #metoo movement and deeply toxic masculinity, and about how certain men, previously revered as celebrities, have proven to be vile and predatory. Bundy, as played by Zac Efron, is a canny manipulator, and you want to like him, want to believe him, want to disbelieve the things being said about him, all of which turn out to be true. Since you know this when you enter the film, it's not really a spoiler at all to say it here, but it's remarkable how the film helps you forget all that.

...tho' I think I like another Ted Bundy film a bit more, in fact: The Riverman (that's a Variety review; for an evaluation from a horror movie perspective, see here). I'll let the articles I've linked provide you more information but if you're a Bruce Greenwood or Cary Elwes fan, you should seek it out. Yes, Cary Elwes of The Princess Bride (and Saw). He makes a great Bundy. 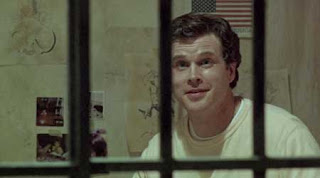