Cheese I like: the Constantine novelization, plus The Legend of the 7 Golden Vampires 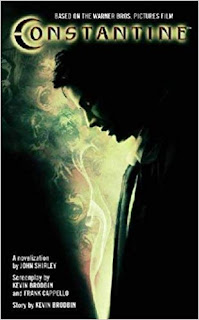 Confession: I like the Constantine movie quite a bit. It may help that I have never once picked up an issue of Hellblazer - which I gather is quite different from what the film became -  but for someone raised on Catechism classes - which I used to attend every week - and The Night Stalker - which I used to catch on late-night Friday reruns - and who as an adult fell deeply in love with film noir and horror movies, the movie has the perfect combination of elements: from its  doomed, wisecracking exorcist/ occultist hero to its dippy metaphysical subplot involving a grand battle between God and Satan (with plenty of demonic possession and other bits of high weirdness thrown in), it's pretty much the perfect film experience for me. I don't generally give much of a damn about comic book adaptations, but this one is dear to my heart, and I went to see it at least three times during its initial theatrical run, enjoying everything about it - from the opening set piece where the Spear of Destiny is found in a Mexican church, wrapped in a swastika-emblazoned flag, to the improbable casting of Tilda Swinton as an androgynous, but male-identified, angel; I still watch it every couple of years for the sheer entertainment and pleasure it brings me, and never cease to be entertained by it. I honestly have no idea why it wasn't a huge hit, and why all these other fucking superhero movies are. (I occasionally watch some of those, too,  and even enjoy them - you'd be right to guess based on the above that I got a kick out of Doctor Strange - but more often than not find them tedious, obnoxious, and devoid of any real wit. I kind of loathed Deadpool, for example, thought Aquaman looked like shit, and wasn't much impressed with Wonder Woman or Black Panther, though I grant they're competently made and might be of value to people who are deeply invested in feminism or questions of race relations). Constantine is silly, sure, but at least it takes its silliness seriously (unlike Deadpool, which appeared to me to have contempt for itself and its audience); plus if you're going to see a superhero with the expectation of seeing something serious, you're probably some sort of idiot.

Or at least a very different sort of idiot from me.

Anyhow, at a thrift store on Vancouver Island, recently, I stumbled across a copy of John Shirley's Constantine novelization. It's something I can't recall seeing on the shelves before. As a teen genre fan, I used to read a few novelizations, back in the 1980s - books written to complement movie releases, usually farmed out to a respected but not particularly famous writer. I don't know a lot about the mechanics of preparing them, but assume that while the film is still in pre-production - maybe as soon as the screenplay is completed, before shooting even begins - a contract is drawn up and the writer in question is given a copy of the script, which  they're expected to stick to, more or less, but are free to embellish a little. Occasionally novelizations can be quite revealing, since scenes cut from the film late in the game generally are retained in the book. You know the outtake in Alien when Ripley finds the dying Dallas, cocooned with an alien growing inside him, and he begs her to kill him? Long before the days of DVD extras - hell, before the days of VHS rental stores - I knew about that scene from Alan Dean Foster's Alien novelization, which I remember enjoying quite thoroughly. 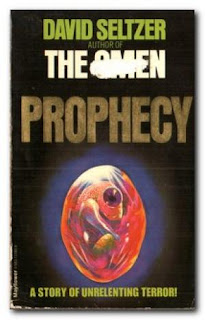 Another I liked even more than the movie it accompanied was David Seltzer's Prophecy, about mutant bears caused by Methyl-mercury poisoning - which has slightly ambiguous origins, since Seltzer wrote the screenplay for the film as well, though I seem to recall reading that Seltzer wrote his screenplay first, then adapted it into a book once the film went into production. It was actually where I first heard about mercury poisoning on reservations - a real issue, which (like much in my life) I first learned about through disreputable means. The book is vastly better than John Frankenheimer's film of the same name; it may be an important movie, in the history of Hollywood North - as one of the first big Hollywood productions to be shot in BC - and it does have some effective moments (like the tour of the lumber mill), but it has some truly risible aspects, as well - perhaps worst of all being the casting of Armand Assante (Irish-Italian by background) as a thoroughly unconvincing First Nations activist... though the dopy looking bear-things (which I believe have been described as looking like angry sausages) also kind of stand out. The book is great fun, tho!

Anyhow, with those two very positive experiences of genre novelizations in mind, and having enjoyed the film plenty, I was more than willing to give Shirley's Constantine a read, and guess what? It's great! As with Alien, it includes moments not in the film - including Constantine's tryst with the demonic half-breed Ellie, which made it, as I recall, onto the extras on the DVD; it also expands certain sequences - like the battle with the demons at Ravenscar - far beyond what ended up in the film, in that one case making the scene far more dramatic and gory, presumably since there's no special effects budget on the imagination. It's also very entertaining to me that Shirley works in references to a few Blue Oyster Cult songs, notably "The Old Gods Return," which is one of my very favourite tunes off the two most recent, criminally underrated, Blue Oyster Cult albums (and which, amusingly, has lyrics written by John Shirley himself; it would be a conflict of interest to be proud of, if he actually managed to get himself extra royalty payments by quoting lyrics he wrote!). I had as much fun with the novelization as I did with the film, and highly recommend it - if you like the movie, the book is a delightful complement.

Do these new superhero films even have novelizations prepared for them, anymore? I presume they're a bit of a lost art; the only ones I've seen in recent years are Penguin Readers, prepared for ESL students. Maybe now there's an Avengers Endgame app, with a game you can play, instead. It's not at all appealing to me. 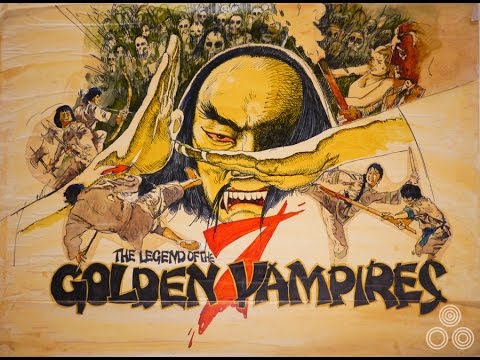 Another guilty pleasure that I'm revisiting, thanks to a recent Scream Factory release, is the kung fu/ vampire film The Legend of the 7 Golden Vampires - a collaboration between the Shaw Brothers and Hammer Studios, starring Peter Cushing as Van Helsing, who travels to China to free a village in bondage to a coven of vampires, led by Dracula himself (who has taken possession of  a Chinese acolyte; sadly, he is not played by Christopher Lee in Fu Manchu mode, which would only have served to enhance the silliness). There are some things that you must rise above, in order to be entertained; the blu-ray release makes it even easier to see the strings on the giant rubber bats, for example, and the Golden Vampires have very odd makeup indeed, which makes them look a bit like a cross between the Creature from the Black Lagoon and a bran muffin.

Also, there are some cross-cultural oddities at hand, like the convention (which I've seen in other Hong Kong genre cinema) of having demonic figures that transport themselves by skipping and hopping, something that is very hard to see as menacing in any way, and perhaps should have been changed for versions of the film that played outside China; it just looks goofy! (Though that may be a value-added feature for some of you).

I have limits on my fondness for crap culture, but everyone needs to have a bit of escapist entertainment now and then. I am not promising people other than me will enjoy the above experiences - I don't presume to be proclaiming either objectively "good." But by damn they're fun  (for me, but maybe for you, too...?).

That's all for now.

Oh: And Freak Dream plays the Red Gate tonight; interview with Elliot Langford here.
Posted by Allan MacInnis at 10:51 AM