So another "one step forward, one step back" for Ma. Her steps forward were quite literal, in fact: when physio came, encouraged by me, they managed to get her up with the walker and down the hallway quite a ways, before she started looking for a seat. Which I will now illustrate pedantically: 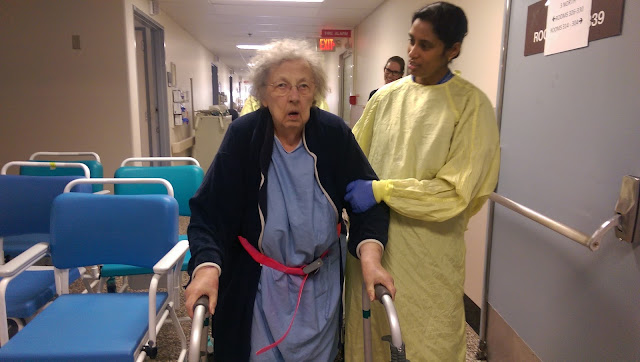 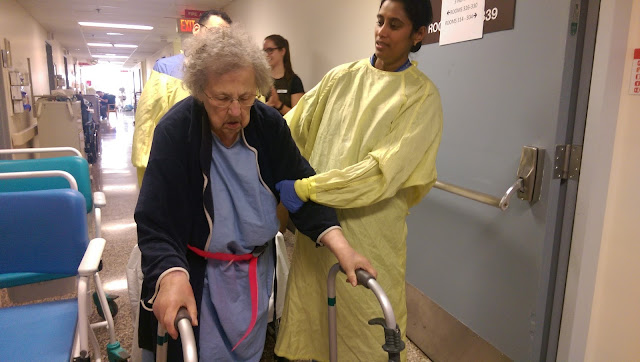 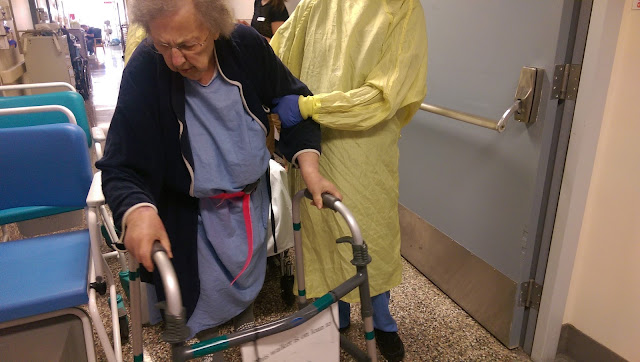 She also had plenty of energy at times, enjoying a short story by Patricia Highsmith that I read to her about two old women, rooming together to avert the loneliness, who torture each other in various small but cruel ways ("Cries of Love"). She also laughed at a very short Hubert Selby Jr. story ("Fat Phils Day"). And she ate plenty - with more of a preference for the chocolate cheesecake than the cabbage rolls they served for diner, but hey, that's Mom for you.

On the other hand - and you can count this as more than one step back if you like - it looks like there is ANOTHER site of infection; and starting last night, there were a couple of falls, some confusion, and some kidney pain, probably relating to one of the infections, or maybe the doubletime work her kidneys are doing filtering all the pharmaceuticals, or whatever it is exactly that kidneys do...

But all in all, believe it or not, Mom did better than I did today. I planned to leave the hospital around 2pm, to check in at work and to have a date night with my girlfriend thereafter. In the end, I did neither. Because Mom was disoriented, I stayed the afternoon and helped clear her head (and rubbed her back where it hurt, and combed her hair, and helped her sit up on the edge of the bed, and served her sips of water and her pieces of cabbage roll and yoghurt). I still thought, right to the last minute, that I might race off at 6pm to meet my girl and, with her, see Midnight Special at International Village - just in case it ends its run after one week, as movies I want to see sometimes seem to do. (My girl loved Take Shelter as much as I, so I'm sure she'll like Nichols' new film). Instead, having served Mom dinner, I ended up ducking into the washroom for what I thought would be a quick bowel movement, and spending the next half hour puking from the throne, while squirting out what looked like black chili into the toilet bowl from my nether port.

I was sweating like hell to boot, and a little sore in the gut. So what fresh hell, you ask, is this?

Thesis one: the coffee, Rueben sandwich, potato chips, and/ or the cookie I had for dinner in the hospital cafeteria, a couple of hours previous, disagreed with my stomach and produced a mild bout of food poisoning. It certainly felt that way; my eventual recovery from the feeling of sickness would argue in favour of this interpretation.

Thesis two: I caught something off Mom. One of the bacteria infecting Mom is gut-based, is plentiful in the feces, and she's had lots of diarrhea, alas, these last few days. While I would like to say only nice things about the hospital (who are being very kind and supportive and have Saved My Mom's Life, and all, a detail we have not forgotten), I must say that, umm, this diarrhea was far more in evidence today than I would have liked. Maybe this was because other emergencies came to light (her falls, or her ripped out IV; she's had three of those now over the last eleven days, so maybe getting rid of the blood trumped getting rid of the poop). Still, when I arrived just in time to serve Mom's lunch, there was an open garbage bin full of what sure looked like shitty diapers and bum-cleaning materials left in the room. When she sat up, I saw there was also a smear of yellow brown on one of her pillowcases, which I promptly chucked in the laundry bin.

Mind you, even in a tidier room, this bacteria is particulary recalcitrant, we gather, and highly contagious, hence the gowns and gloves protocol you see in evidence above. (I haven't been observing said protocol that religiously up til now, but fucksake, I was sleeping in the same room as her days before they even knew about this particular infection, and my own gut flora, which this affects, are compromised by my own recent antibiotic rounds, so if I'm going to get this thing, I've surely already got it; it would explain my frequent loose stools of late). 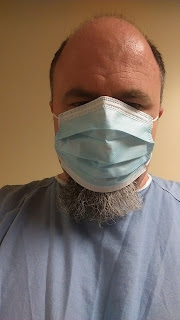 In any event, once a helpful nurse (or such) wheeled me to emerg, they took my puking and shitting very seriously, gowning and face-masking me, and moving me into the high priority zone for once, where they collected a sample of my loose black chili in a little white tray that they referred to, I believe, as a "hat," which you place under the lid of your toilet seat before you go. (So yes, folks, today was the first time I have shat in a hat). They took my blood, too, and gave me an anti-nauseant (which I would later supplement with my own preferred form while waiting for the bus, listening to Electric Wizard). They even hydrated me by IV and gave me an X-ray or three to see if anything was distended. And just in case, because they think it highly possible that I might have contracted Mom's bug, they gave me a prescription for the antibiotic that addresses it, the very one that Mom is on, Then they ripped the IV tape off me, tearing out yet more arm hairs (the ones that were just growing back from my experience of IV therapy earlier this month); stuck yet ANOTHER bandage on me, against my protests, for more arm-hair rippin' fun later; and sent me packin', off to Mom's ward again to grab my bag while avoiding touching anything else, especially Mom.

So much for date night. Apologies and blessings to my girlfriend Erika, who has been coping with my total absence (and constant tales of medical woe) for 90% of the last five weeks. Believe me, babe, I'd rather be there than on this couch.

...Though since I smell a bit like vomit tonight, you might have your own opinion on that point.

In other news: my Billy Hopeless interview is online now!
Posted by Allan MacInnis at 11:41 PM