Iggy and the Stooges (film) to play Vancouver! 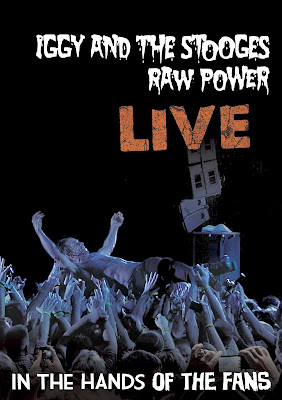 I've seen Iggy Pop twice in my life - once opening for the Pretenders at the Pacific Coliseum on the Blah-Blah-Blah tour (which stunned me - as a relative Iggy noob, I had no frame of reference for how exciting and energetic a showman Iggy could be; I still remember the grizzled oldtimer in the pit who kept hollering at the stage, "spit on me, Ig!") and once in Seattle with the "original reformed" Stooges lineup, touring The Weirdness (Watt, the only new member, wore a boilersuit and humped his amp and clearly was in glory up there). Ig was still stage diving back then, and, senior citizen or not, he leapt into and rode upon the audience an untold number of times; I gather a cracked rib or such made him re-consider the practice awhile ago, though he was so irrepressibly energetic I wouldn't be surprised to hear he's back at it. I have yet to see the reformed Raw Power Stooges, with James Williamson on guitar. Barring them ever coming to Vancouver, our best chance to experience the madness of a Stooges concert is on the big screen at the Vancity Theatre, Monday, March 12th, where they'll be screening Iggy Pop and the Stooges: Raw Power - In the Hands of the Fans, a document of the band's 2010 All Tomorrow's Parties concert where six Stooges fans were armed with camcorders to film the night. People wanting a taste of the show (also available as 180-gram vinyl) should check out this clip of them doing "I Got a Right" - and then imagine it on the big screen with big sound. I mean, it still ain't quite the same thing as seeing the band live, but it may be as close as Vancouver gets, y'know?

By the way, Henry Rollins gives a very enthusiastic review of a recent Stooges show here. My liking for Rollins has seen its peaks and valleys, but I will be forever in his debt for turning my teenage ears onto the Stooges' Fun House and the Velvets' White Light/ White Heat in a Spin article he wrote back in the 1980's. I had (bein' a suburban youth) heard neither album at that point. Suffice to say, they made an impact...

BTW, my favourite-ever Iggy concert footage is viewable here, performing the live-only song "The Winter of My Discontent" circa 1980, with Carlos Alomar on guitar. (And incidentally, that's Clem Burke on drums, soon to play Vancouver with Glen Matlock, Fish and Hugh Cornwell. Why don't I be nice and stick up the gig poster for that? 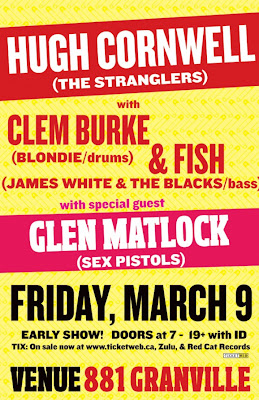