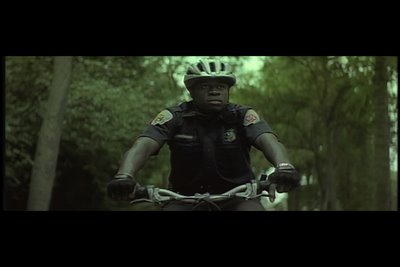 For those looking for a distraction from all the horrible news from the Middle East this week, I highly recommend Robinson Devor's film Police Beat, at the Vancouver International Film Centre until August 3rd. Co-written by Stranger writer Charles Mudede (who wrote that marvelous piece last year on the Enumclaw horse fuckers -- "outtakes" from which can be found here, in which he compares Enumclaw to an anus), the film looks at cultural and social disorder in Seattle through the eyes of a confused and very much alienated African immigrant, working on the police force. The episodes in the film are drawn from actual cases to cross Mudede's desk; they're linked by a stream-of-consciousness narrative in Wolof, the language of Senegal, detailing the main character, Z's, interior stresses about his relationship problems, which threaten to draw him into the disorder he perceives... The film is funny, disturbing, and hypnotic in the same way at the same time: funny in that we recognize the disorder around us and inside us, seeing it through Z's eyes; disturbing for exactly the same reason; and hypnotic insofar as its rhythms are entirely linked to Z's interior monologue, which, for all its foreignness, is disarmingly familiar... Plus the whole thing is constructed with a unique, dreamlike quality and shot in gorgeous blue hues. It's particularly interesting seeing the film as a man; there are very few intelligent and sympathetic representations of the world as seen through a man's eyes out there (I'm dead serious); but there's much more to the film than that... I can't do it justice at the moment. It's quite remarkable, and appears to get richer each viewing. I urge you to see it.

...Oh, and smoking a bowl before you go in really helps you adjust to its rhythms, too. The more intimacy you can achieve with Z, the more rewarding the film... Seeing it a second time tonight has convinced me to see it a third time, and maybe a fourth.

There were less than half a dozen people in the theatre tonight, folks. You can do better than that.

Postscript -- think I'll go see this again on Sunday. Those interested in reading more about the film are directed to this interview with Devor and Mudede, which also contains hints at what The Minotaur, their next feature, will be like. Interestingly, it appears to have at least a slight structural similarity with Bruce Sweeney's next film, American Venus, which also has action taking place along the US/Canada border, set partially in Vancouver...
Posted by Allan MacInnis at 3:25 PM

Less than half a dozen? That is not good at all; particularly unfortunate since this film is so fascinating. I wrote it up briefly at my blog with links to various reviews. I had thought that VIFC screenings were getting more popular; when I saw Badlands there the turnout was respectable and even the obscure Iranian film Iron Island last week had a decent sized audience when I was there.

I was under the same impression, but no, last night was a return to the first couple of months of Vancity life. Actually, I counted six people exactly, including myself (but maybe one or two snuck out before I turned around).

Will look at your blog now...