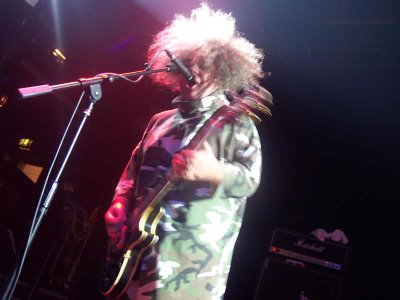 Yeehah. I used to see the Melvins all the time at the Cruel Elephant, years ago, but I fell out of the habit, and moved to Japan for awhile, so it had been some time... I was very pleasantly surprised to see them with Jello Biafra at the Croatian Cultural Centre last year. They started the show with a few of their own songs, and they were heavy and fierce indeed. Delighted to see that they'll be playing the Commodore September 12th. Not many rock bands I'd go out of my way to see these days -- Nomeansno, the Ex, and the New Model Army are the other big three. Never actually been that keen on the Melvins recorded output, but seeing them live... Yes!
Posted by Allan MacInnis at 3:01 PM

Three of my favorite bands! The Ex My girlfriend indroduced me to about five years back. I'd like to see them live but they rarely stray this direction (they did about four years ago and I was away at the time) and because I work weekends I missed NMA who were headlining at this years Wickerman festival in Dumfries and Galloway.
Thank for the link to the Nomeanswhatever site, excellent. My girlfriend and I are planning to move to Granada in Spain in October and the lads are due to play Sevilla in November so once again I'll see them in a foriegn land.

New Model Army cancelled their last Vancouver gig, and I've never seen the Ex, but Nomeansno I get to see about once a year...