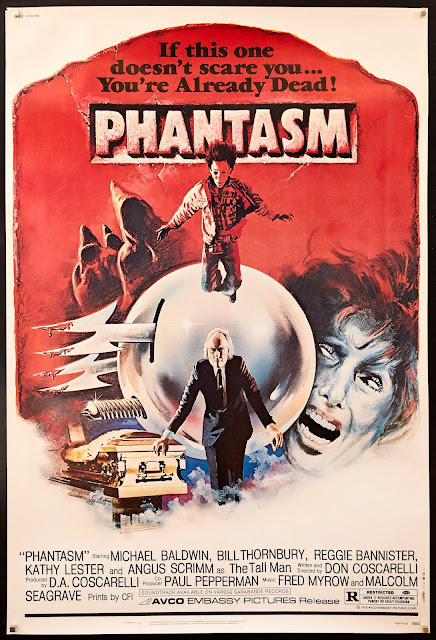 You know you're deep into the comfort movies when you find yourself watching a Phantasm sequel.
Phantasm the first, of course, is the best of them. It bizarrely fuses male anxieties about sex and death into a sort of "male brotherhood" movie, by which two brothers and a best friend come together to battle against... what, exactly? The explanation is ridiculous enough to elevate matters into the realms of the totally unreal, like the whole thing is some sort of shared delusion, never meant to be taken seriously: the Tall Man and his team of shrunken-dwarf Jawa ghouls are actually graverobbers from space, converting bodies into slave labour on a distant planet. Oh, and they have yellow blood, can travel through mirrors, and if you cut off their fingers and keep them in a box overnight, they turn into killer flying insects. Some of the most ridiculous and outlandish monster-mythmaking in history - next stop, Cenobites! ...But the beauty is, it really doesn't matter, because whatever the Tall Man and company represent in terms of the story, their primary function is to give the brothers and friend a chance to assert their resourcefulness, their love of tools, their masculine virtues and thereby keep death at bay. It's as strange a celebration of male brotherhood as can be wished...

...and it actually does get weirder in the second and third and fourth films, as it becomes more and more apparent that set pieces in which the main characters can use tools together to fight against the darkness are the point of the film. There's even, in the second film, a level of homoerotic fantasy to it, which I fully understand: because at 12 or 13, before my hormones really kicked in, I would have LOVED to just become a go-on-the-road monster fighter with my best male friends, and never think about those slimy girls again! Reggie and Mike - played in II by James LeGros, because I guess the suits figured he was more bankable than Michael Baldwin - are like some preteen fantasy version of what adulthood must be like that is recognizable and charming and quite comforting to inhabit; you want to revert to your own 12 year old sense of the world so you can be one with them, sharing in brotherly love, fighting monsters, fighting the Tall Man... whatever it is he represents. (Adulthood?). There's also a female character who gets a subplot of her own in II, and some rather weirdly Nightmare-on-Elm-Street-like dream stuff (though much of all of the films works in a kind of dreamlike way). There's no real need to extend the franchise beyond the limits of the first, classic movie, but if you haven't seen them, 2-4 are very much still the children of the great Don Coscarelli, and if they add nothing to the first film, they certainly ably extend its pleasures. Let's hang out with Reg and Mike and... doesn't Jody come back in one of them? I have no doubts... 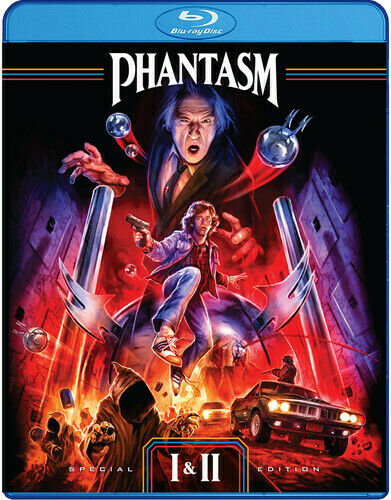 I've loved Phantasm since a VERY influential double bill of both it and Dawn of the Dead my father took me to in Mission, somewhere around 1978 or 1979. (I saw both films theatrically at the perfect age). I went to see it remastered onscreen at the Rio a couple of years ago, and just yesterday, upgraded my discs into blu-ray as part of my "cinematic comfort food" love-in, which has also featured The Fog, The Mist, The Dead Zone, Children of Men, An American Werewolf in London, Children of the Corn, The Blob remake, The Invasion of the Body Snatchers remake, and a couple of okay but not great films from The Eurocrypt of Christopher Lee. (I also grabbed a couple of other Severin titles as blind buys - All the Colors of the Dark, And Now the Screaming Starts, and The Horror of Party Beach, so I can trade off with my Phantasms over the next week. It's all keeping me well-entertained. BTW, if you missed it, Phantasm I and II have just been issued as part of a two-fer set on blu-ray; III and IV are sold separately but on the cheap (though lord knows there are bundles of all films, too, if that's what you want). Ravager, the last one, is a bit of a bummer - it is simply not as fun a jaunt, and is lacking Coscarelli at the helm, though it does continue to wax meditative on death, and possibly is a necessary film if you really want to grasp the full arc thematically...
Movies like this are gonna keep me goin' this week. Thanks, movies! (Thanks, Don Coscarelli!).
Posted by Allan MacInnis at 1:08 PM

Such a great film. That was a good read that brought back my own memories of seeing it at The first Caprice theatre in Chemainus on Van Isle when I was 12.