The Burnt Orange Heresy and the nostalgia it inspires... 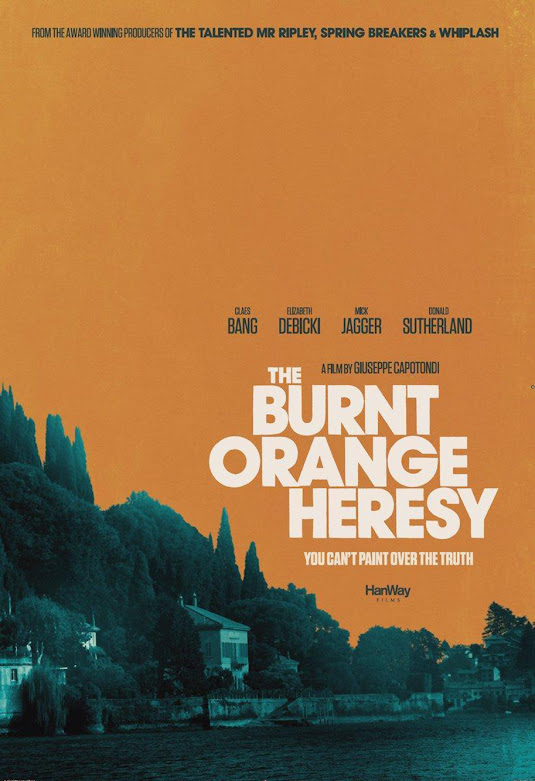 In the space of three days, I have, by chance, seen two films with Elizabeth Debicki, an Australian actress that you may have also seen in Widows, The Guardians of the Galaxy sequel, or in Baz Luhrmann's The Great Gatsby. She was also in a recent adaptation of Macbeth that I quite liked (the one with Michael Fassbender). The first film I saw her in, two days ago, was a big-budget theatrical blockbuster, Tenet, which has been so well-written about in the New Yorker that no further words of mine seem necessary, save that I did enjoy Ludwig Göransson's score for the film, a sort of high-energy Tangerine-Dreamy synth-type thingy that sounded really good being played LOUD at Landmark, who, by the way, apparently have dropped that annoying practice I mentioned of dropping sound when the credits roll. The film itself, alas, was not as impressive; it had had trailers that made me believe I might enjoy a Christopher Nolan film again for a change - haven't really liked anything since Memento - but it was not to be. As Adam Nayman of Cinema Scope, observed of Dunkirk, "That Nolan and his collaborators... have worked to create something intricate and unique is undeniable. What’s less certain... is whether their structural intervention signifies much beyond its own complexity. The film is impressive, immense, immersive, yes — but is it anything else?" I would say the answer is either no, or perhaps, if there is indeed something to Tenet that I missed, it is not worth the effort of extracting it. (It also doesn't do much with John David Washington, who has none of the effortlessly radiant charm he brought to Ballers). 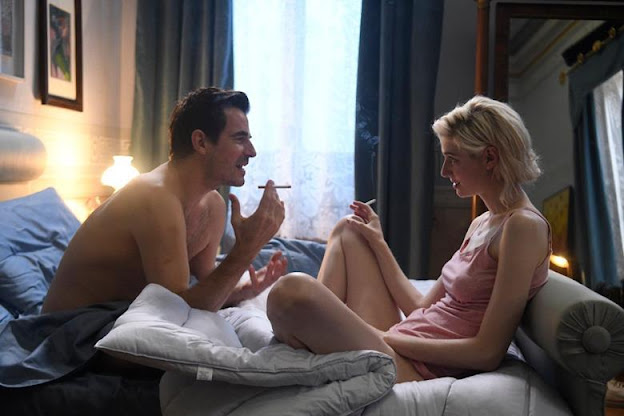 The second Elizabeth Debicki film I saw, which I finished on home video just tonight, was an independent/ arthouse film, The Burnt Orange Heresy, which played in Vancouver for, I believe, less than a week - longer than  Jay Baruchel's Random Acts of Violence, which I still haven't seen, and which seemed to get pulled from distribution halfway through its first week; which is still better, say, than Jeff Barnaby's Blood Quantum, which didn't get a theatrical roll-out here at all. Blame it all on COVID, of course. Erika and I had meant to see The Burnt Orange Heresy theatrically, but the night we actually went to Landmark with intent to see it, we discovered that they had changed the showtime from the previous day, when we'd hatched the plan, and - since this was still in the early phases of the reopening, when most screens were filled with things like Jaws and Raiders of the Lost Ark,  there weren't dozens of showtimes to choose from; we would have had to have waited for a couple hours to catch the next screening, so elected to go home instead. Rather a sad, lame rollout for such a good film; it ended up appearing on DVD (not even blu) at Walmart a few weeks later, so I grabbed it, and must say I enjoyed it so much vastly more than I enjoyed Tenet. Even Debicki was better: there is a moment in The Burnt Orange Heresy where she simply pauses and contemplates the landscape, which hints at a richer and more interesting inner life than you will find in the whole of Tenet. She seems, in The Burnt Orange Heresy, like a real person, with thoughts, feelings, ideas, a history - although the film keeps you guessing as to what that might be, and leaves a great deal unstated. She's not exactly the main character of the film, but she's sort of (along, maybe, with Donald Sutherland, as a reclusive artist) the moral center of the film. It's not the sort of movie where the character who is the moral center is likely to fare well, alas, and almost else in the film is some variety of shark - some, like art critic/ lecturer/ freelancer Claes Bang, in the lead role, being better disguised than others. (Mick Jagger's character, meanwhile, might as well be a lizard person). 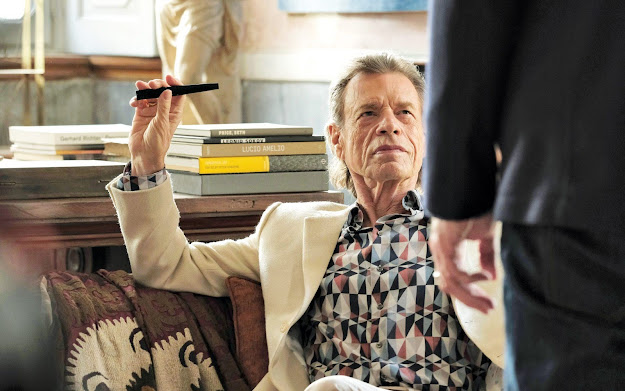 There are a lot of reasons why I was predisposed to like The Burnt Orange Heresy. For one, I'm a fan of Patricia Highsmith's character of Tom Ripley, who, in the later novels about him, is deeply involved in art forgery (and murder and upscale European living), and while the novel this film is based on is not by Highsmith, it might well be; the story is very Highsmithian, and forgery and upscale European high life are definitely themes. As a happy fact, though, I am also a fan of the work of the novelist Charles Willeford, who did write the book that this is based on (now in print again, thanks to the film), though I have no way to reconcile the texts I have encountered by him - which also include the novel Pick Up, a fascinating, bleak, hardboiled crime  novel with a helluva twist ending, and two film adaptations of his work, Miami Blues and Cockfighter - with what I have seen here; they all seem very different. Though the film has some very clever and surprising moments, and a story that actually amounts to something, mostly what I found myself liking here was the nostalgia I feel for this KIND of movie, the sophisticated-and-pretty-thriller-aimed-at-an-educated-but-not-prudish-audience. They used to fill the screens at venues like the Royal Centre or command the space dedicated to one-to-three videos on the new arrivals wall of stores like Blockbuster or Rogers Video: smart, small-scale, but very enjoyable "mainstream arthouse" movies like The Comfort of Strangers or Pascali's Island or White Mischief or even the film Ripley's Game (which came out a bit after the Royal Centre years). None of these are necessarily great films (tho' happy to note that Criterion is putting out The Comfort of Strangers soon), but they were a sort of healthy cinematic staple food, at one point, which didn't leave you feeling like the filmmaker has contempt for you or took you for a sucker or a lowbrow, which is what you kinda get from the works of Christopher Nolan, Michael Bay, or any of the Marvel Comics Universe (or DC, for that matter) films... I guess there IS a way to find film fare like this on Netflix, and who knows, maybe that's where The Burnt Orange Heresy will eventually wind up, but the film left me feeling satisfied in a way I haven't for awhile, watching most Netflix fare.

Anyhow, I liked The Burnt Orange Heresy quite a bit. Really all I had to say...

Posted by Allan MacInnis at 5:05 PM