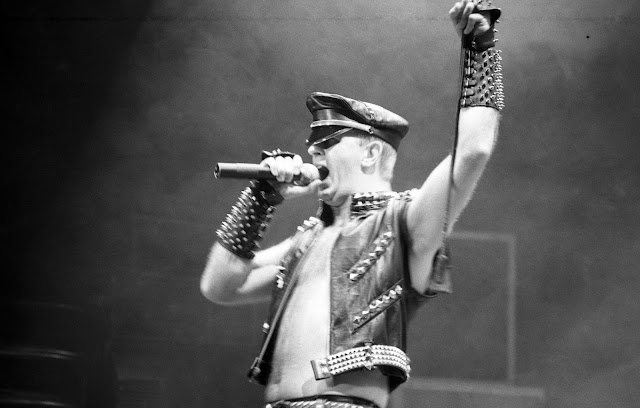 Judas Priest at the Pacific Coliseum, May 28, 1984 (the Metal Conqueror tour, one tour after the one I write about); photo by bev davies - not to be reused without permission
In 1982, at age 14, I saw Judas Priest my one and only time, at the Pacific Coliseum. I had no idea that lead singer Rob Halford was gay - nor would I have been able to tell, as I was pretty naive about homosexuality. Having grown up in the suburbs, when "queer" was still an insult and homosexuality was confusing, taboo, and could possibly get you beaten up, I had little exposure to any actual gay culture. It was pretty much invisible in my environment, which made it a matter of survival to either clamp down on your queerness or, if you couldn't, stay closeted about it. There was a similar conservatism in the media. Billy Crystal in Soap aside, there wasn't much in the way of positive representation of gay culture. You could see the Village People performing on Solid Gold bedecked in their fabulous costumes, but only because most straight people had no idea that they were engaged in a pastiche of queer fashion. I certainly had no idea they were gay, nor Elton John, Freddie Mercury, etc; someone had told be David Bowie was openly bisexual, but as the only person I knew of who was openly gay, it created a mistaken impression of what "looking gay" meant - tall, thin, Gothy, pale, and maybe with some pink highlights in your hair? There was something about which ear you wore an earring in, too, that students in our high school explained to each other. If you had told me at the time that Halford was gay, it would have puzzled the hell out of me. But he's so masculine! He's dressed in leather and screaming for vengeance! Gay people don't do that! 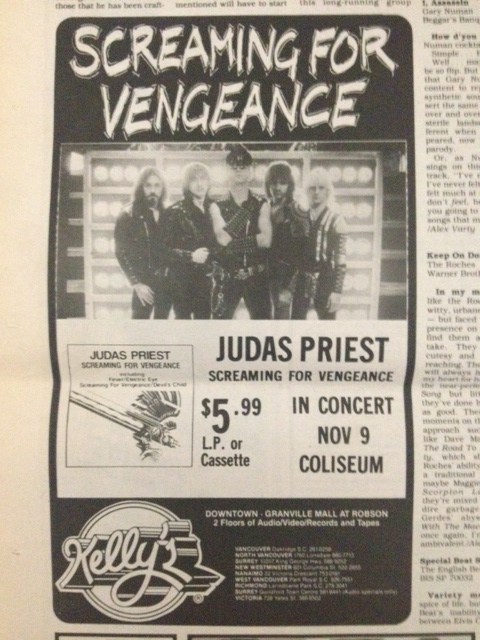 As a teenager, though still a virgin, I had already gone through enough formative experiences with my sexuality to know that a) I was more interested in girls than boys and that b) to the extent that I did sometimes feel feelings or think thoughts about my male friends, it was not safe and could cause problems for me (and confuse my own feelings about myself and my friends). Back then - and even moreso when I started to dress as a punk - people like me (bookish, arty, odd) would already get homophobic insults shouted at us from the local apes, who would throw bottles at us from their Camaro windows as they passed and occasionally gang up to shitkick us. It was enough that we were different, somehow a threat to their chosen form of being, for us to get beaten up - we didn't actually have to do anything. I can only recall one instance where someone called me a f***** and proceeded to punch me (after I had retorted - smartly, I thought - "asshole!" at him, but his initial verbal attack was wholly unprovoded). If it's the only time I experienced violence, it certainly wasn't the only time I encountered hostility. So if you could get beaten, abused, and called the other f-word even if you weren't gay, actually being gay was obviously out of the question. During my brief foray as a freelancer for Vancouver's Xtra West, I wrote about the few queerish experiences I did have, and about my decision to basically lock that part of myself in the closet, where it has remained pretty much unexamined and un-acted upon, the odd thought or impulse aside, for the rest of my life (I really do like girls better, anyhow).
Knowing beyond a doubt that he was gay since a teenager, Rob Halford never had a choice, but he also experienced a lot of torment about his sexuality, which he kept secret from his fans and the press as Priest grew more and more visible. And here, in Confess, we have a remarkable document: a memoir of closeted, covert, and at times somewhat desperate sexuality, overlain with the shame not of being gay, but of having to hide and live a lie, written by someone who to all appearances is now completely comfortable with being "out" and pretty much has nothing to lose by being up-front about it. Particularly interesting is a bit of psychologizing Halford engages in about gay men who, having internalized a negative image of being gay, pursue unavailable or straight partners in a bid for some sort of societal approval - a destructive pattern that Halford does appear to have fallen victim to at one stage in his life, though by the end of the book, he's in a happy relationship and at ease with himself. 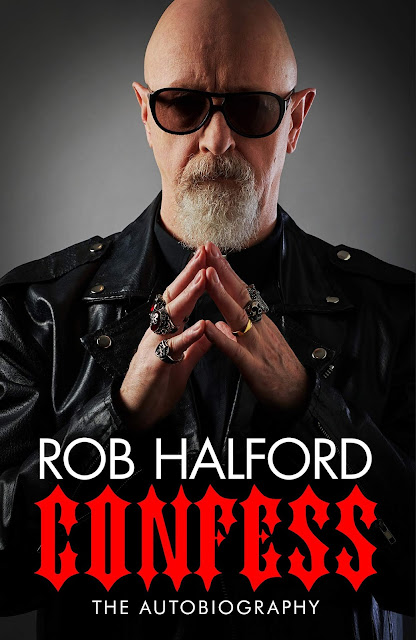 Though some of these are pretty serious themes, it's a fun, breezy read, in fact. Rob seems to be a fairly chatty guy, and - though the book covers everything from his bust for public indecency in a men's room he was cruising to kinda shaking hands with the Queen (!) - it is all written with a fairly light tone, like you've got Rob in your living room telling you stories about his life. (There's one bathroom encounter at a truck stop that is too good to ruin in a review; let's hope the person Rob writes about gets his hands on this book, so he can run around telling his friends "that was me," should he, uh, want to disclose that). The tone of the book resembles, in fact, that of another memoir by a metal musician from the same part of the world, Tony Iommi's Iron Man, except with a bit more alcohol than cocaine, and you have to sub out Iommi's countless tales of dangerous pranks with pyrotechnics with things like encounters at the glory hole (one chapter title is, in fact, "Mine Eyes Have Seen the Glory Hole," and if you're naive about how glory holes actually work - how men might signal to the person in the next stall that they are ready and willing to receive - you will be amply enlightened; since you might not want to put your gay friends on the spot and ask them for details, Rob's memoir comes in handy this way). 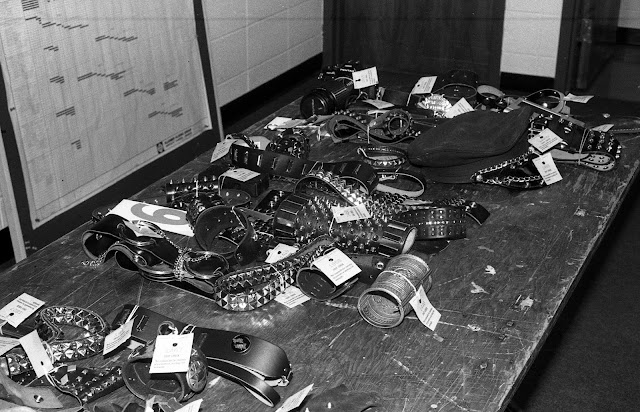 Gear confiscated from the audience, May 28, 1984, also by bev davies, also not to be reused without permission
The actual role of Rob's helper in preparing the memoir, Ian Gittins, is unclear, but you come to trust that the voice is Halford's own, and it's warm, witty, and confident, covering all sorts of material besides his tormented sexuality. How did Halford come to "accidentally" quit Priest for a few years? How did the band defend themselves against charges of backmasking-causing-suicide? (I actually laughed aloud at this section of the book, read it more than once, and shared it with my wife, but again, the best bits are too good to repeat here). And while there are plenty of expected stories about encounters within the metal universe, for instance during the times Halford actually subbed in as vocalist for Sabbath, or collaborated with members of Skinny Puppy and Nine Inch Nails on one of his solo side-projects, there's also ample room for Halford's "pop tart" side, with the singer delighting in sharing anecdotes about meeting Lady Gaga and Madonna.
Halford even talks about times he snuck in queer themes into his lyrics, unbeknownst to most metal fans (who were as naive as I was at age 14, back then). Tesco Vee of the Meatmen and I once joked publicly about such things - about Priest shooting a rock video in a sauna, for example, or having a song titled "Between the Hammer and the Anvil," which Rob doesn't go into. But turns out there is plenty of overt hinting in Priest's catalogue, from songs like "Jawbreaker," which Halford says is about the trepidation involved in going down on a really big cock, to "Raw Deal," about cruising a notorious gay bar in the States which Rob hadn't been anywhere near at the time of writing the song. I forget the exact line but he describes it as kind of coming out to Priest's audience, and having (almost) no one notice. And while Halford denies that his stage costume has anything to do with the kind of sex he likes - he's not a leather bar kinda guy, apparently, is pretty vanilla in fact - he does tell stories about wearing hankies onstage occasionally, with coded meaning for those who know (I thought that was all something invented for the movie Cruising, but no). 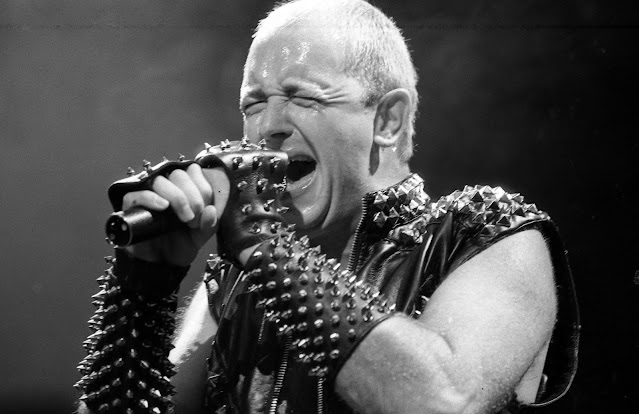 Judas Priest at the Pacific Coliseum, May 28, 1984; photo by bev davies - not to be reused without permission
Confess is eye-opening, funny, and a fast, light read - the sort of book that someone who doesn't have time to read books can blow through in a week, for example. It also makes it clear just how big a relief coming out was to Halford, whose stories of bathroom encounters are often funny and sometimes kind of hot, but always overlaid with shame at having to resort to such things; it clearly suits him far better to be open, comfortable, and accepted, and you end up quite happy for him that that's where his memoir arrives.
A recommended read!
Posted by Allan MacInnis at 12:46 PM