A Tim Chan Interview (apropos of the same Saturday gig I just interviewed EddyD about, below) 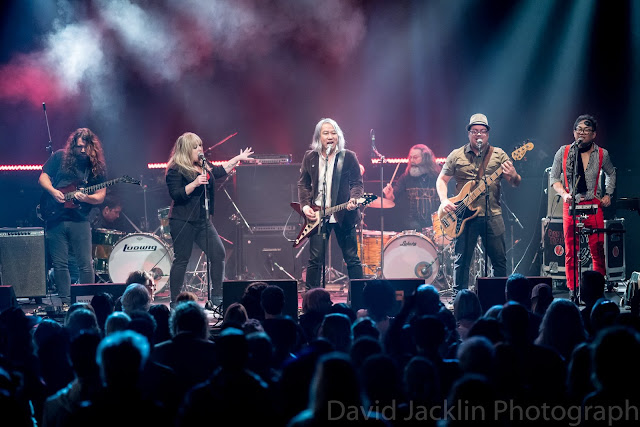 China Syndrome at the 2020 Bowie Ball, photo by Dave Jacklin
I have seen Tim Chan's band, China Syndrome, a dozen times or more, but the last time I saw them - at the 2020 Bowie Ball, which I wrote about, with terrific pictures by Bob Hanham, here - the band was significantly different. They were lacking long-time guitarist Vern Beamish - who, incidentally, is one of a shortlist of guitarists that Pete Campbell, in conspiratorial mode (and talking while his friends were onstage, to boot) has called "the best in Vancouver." Beamish had always presented as the most cerebral member of China Syndrome, and sometimes his introspective onstage demeanor made a striking contrast with the bouncy, ebullient Tim Chan and Mike Chang.
At a very different end of the introvert/ extrovert gradient, at the Bowie ball, Beamish's replacement - a temporary one, Mark Richardson - rocked out like he was part of a Guns'n Roses cover band or something, almost upstaging Chan and Chang. It was a very different feeling for the band, and a big deal, since Beamish goes back to the beginning, has done plenty of the writing, and often took the lead solos (which, when he and really Chan hooked into each other, as during a particularly potent reading of "One Too Many," in Surrey, there was a real fire generated. That performance didn't end up on Youtube, but this one cooks pretty hard too). It's one of those member changes that, if you follow the band, you're really curious about... what will they sound like as a three piece? If  they find a permanent replacement for Beamish, what energy will that bring to the band? It's an interesting development...
In the face of COVID, Chan has been granted some time to figure things out. "The Bowie Ball was," Chan reminds me, in fact "the last time China Syndrome played. We had already planned to take a few months off after that and, of course with COVID-19, that's turned into a much longer hiatus. The guitar player filling in for Vern at the Bowie Ball was Mark Richardson. He's an amazing guitar player and has played in several Vancouver bands including the Lumps and Drive By Poets (with Mike Chang of CS) and also has been a mainstay of musical theatre here in town. He currently leads the amazing symphonic metal band Ophelia Falling -- check 'em out here and here. COVID-19 has delayed our decision to add to China Syndrome's lineup at this time. We are carrying on as a three-piece for now, and if we do add another member they do not necessarily have to be a guitarist -- keyboards may be a possibility!"
For his part, Beamish, Chan says, "is laying low and working on completing his music degree program. He is involved with a few choirs in town (he toured South Africa with a local choir in January) and is focusing on his classical guitar chops." He will presumably surface again in Vancouver, but doing his own thing.
So when was the last time Chan did a live solo set? It's somewhat hard for me to imagine what that looks like, though not unprecedented. "I played a solo set at last year's International Pop Overthrow Festival at the Fairview Pub," Chan tells me. "I was a last minute replacement for a band that cancelled that night. So it was pretty impromptu as I did not really practice for it. Here's "My Pal Dan" from that set. My setup will be similar to what you see in the video, just me and electric guitar."
Chan plans a set drawing on both China Syndrome originals and a few covers. Unlike EddyD, interviewed below about the same show, Chan often includes covers in his sets, including a couple of really delightful interpretations of Squeeze; but he's not hinting as to what they'll be, this time - just that most of them are songs "I would not normally play with China Syndrome." 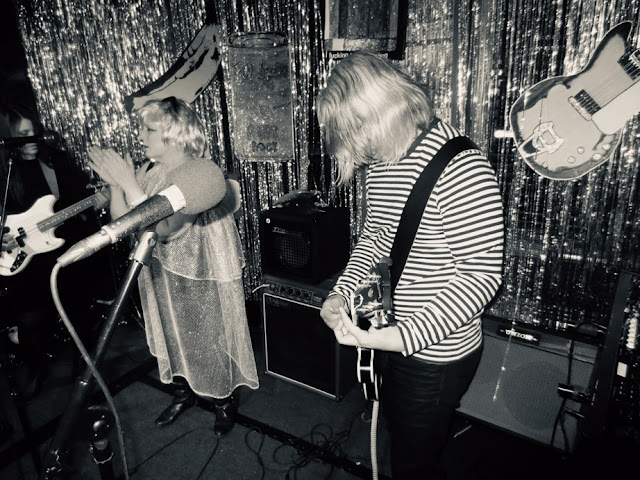 As COVID has ground on, Chan has kept busy, "playing both live with Pill Squad" - who gigged at the Princeton during June and July, and have a new show coming up August 28th, also featuring StrobCam (2/3rds of Coach StrobCam) and Finn Leahy' band Air Radish.

Chan has also kept active via online video collaborations, which he calls "iso-collaborations," such as  this one with Mike of China Syndrome, reworking China Syndrome's song "Nowhere to Go," off their 2018 album Hide in Plain Sight; or this take on Squeeze's "Pulling Mussels (from the Shell)," with the Vanray's Eric Lowe and Gordon Rempel. (Chan notes that "we were stoked to see Glenn Tilbrook of Squeeze commenting on it and liking it on Instagram!"). 64 Funnycars, too, "have also done a few iso-collaborations -- here's one of "Here Comes that Monday Feeling." However, "China Syndrome has decided not to play or practice in person during this time. We'll take things as they come and will definitely reconvene when we all feel comfortable about doing so," probably in three piece form.
Does Chan have a history with EddyD. or Sinead X. Sanders, also on the bill Saturday?

"I've known Eddy since the 1980s - Eric Lowe introduced me to him back in the day when they played together in the Fabulous Wallys and Chainsaw Running. Of course, we've shared many bills together with our respective bands over the years. And I've been a guest player with Eddy D and the Sexbombs, appearing with them at Bowie Ball 2019. As for Sinead, we've also shared many bills together in the past few years, especially with Pill Squad. We were both part of the Night of Nilsson (tribute to Harry Nilsson) gig last year at LanaLou's and earlier this year, we both participated in the Lou Reed tribute show at the Princeton."
Anything I've missed?  "Nothing much more to add about the gig other than it will be a rare chance to see some performers who usually rock out play a low key, quiet show. Sinead, of course, usually plays solo anyways but she is always fantastic, what a great voice!"
More information on the gig here. It starts and ends early, so it's a great excuse to go for dinner; note that Lanalou's makes a damn good poutine... 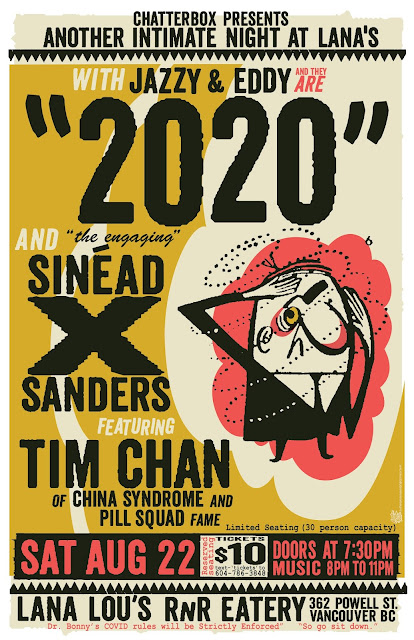