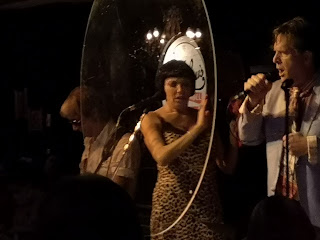 "Oops, I Did It Again," as Richard Thompson once sang. I went to a concert. I wore my mask the whole time, except when sticking a straw under it to sip my Jolly Rancher concoction - a tasty beverage that tasted indeed like a Jolly Rancher, and a specialty of Lanalou's ($10 for a double, which was very much worth it). And to tell the truth, it all felt safe enough, with a plastic barrier preventing Dennis Mills from singing moistly onto the audience, a strict limit on the number of people allowed in, most staff wearing masks most of the time (and, as I say, at least one patron), and no mingling of the audience - but, you know, watch and see if I die, I guess.

Will I regret writing that sentence? Maybe! I gather any indoor spaces run the risk of aerosol transmission of the virus, and that the whole fomite/ surfaces thing is sort of a "spring 2020" way of conceptualizing how the novel coronavirus spreads; anyone wanting to update their understanding of how scientists currently believe the virus can be caught should check out this excellent article... It will see me wearing my mask pretty much anytime I am in a closed space with others, I think, based mostly on this striking paragraph:

A clear example of the benefits of masks is a recent outbreak in South Korea, in which one woman at a Starbucks infected 27 other customers — whom officials assume were not wearing masks because they were eating and drinking — but none of the employees, all of whom were masked the entire time.

A friend also mentioned on FB in passing a study that showed that in fact most new cases of COVID-19 correlated to people who had eaten in restaurants since they started reopening (I don't have a link for that but it makes some sense).

Truth is, as much as I enjoyed the show - as I would enjoy any show that Shelley Preston (of Preston & Fletcher and EddyD & the Sex Bombs) was doin' background vocals for, I think; Vancouver is lucky that she plays in so many bands! - the main reason why, I think, it was important for me to go was so that I wouldn't WANT to go to other concerts for a long while. I was Jonesin', so I took a hit of rock'n'roll, and now I'm good til maybe 2021? Let me find some wood to knock. With apologies to Dennis Mills, much as I enjoyed myself, the best thing I probably got from the gig was being reminded that I am perfectly able to live without rock concerts, and probably should. I will miss the social/ community aspects the most...

The dodgy world outside Lanalou's helped fortify that resolve, but to understand my actions in the story that transpired, you gotta understand: I wasn't exactly sober. I had brought a government joint in a difficult-to-open, childproof government container, which I was showin' birthday boy/ Judys drummer Taylor Little outside the venue while he smoked a plain ol' cigarette, observing me as I struggled to pry the fuckin' lid off. (There is clearly a mechanism at work that makes it pop open, but though I have successfully triggered it a few times, as I break out my lone joint for special occasions, I have no idea what that mechanism IS, so I can't actually control how to re-open the package, and tend to stand there like an idiot cursing it, which was behaviour I felt I must explain to Mr. Little, who, incidentally, was celebrating a birthday last night; happy birthday, man!). Anyhow, between a couple hits on my joint and the Jolly Rancher cocktail (and a night of live music!), I felt pretty good as I left the venue to make my way to the Skytrain on Main. I even got to pet an adorable dog - an old, shaggy little fella who looked rather like a mop with eyes - who was being walked by a local. But as I arrived at my stop, the DTES asserted itself with a vengeance. Had I not smoked a bit, and had my double-cocktail, I probably would have been vastly less relaxed about the altercation I witnessed and intervened in. (Yes, folks, I stepped into a fight between two DTES residents, so if you're already thinking I'm an idiot for going to a concert in the midst of a pandemic, I'm gonna validate that theory in spades...).

I've already posted the story on Facebook. This is how it goes:

So I am feelin' pretty good leaving Lanalou's, waiting for a bus, when a homeless-looking, but also tough-looking, dude drags his sleeping bag, full with his belongings, around the corner, also waiting for a bus, about to light a smoke. Someone else - another local, but fitter and younger than some - flies across the street with fists flailing, bellowing, "YOU TOOK MY LIGHTER! That's MY lighter! Give it back!"

The startled alleged lighter-thief is taken aback, defensive, shouting in French-accented English - "This ees NOT your lighterrr, is MY lighterrr, I buy just now at store around ze cornerr!"

"Bullshit man! You took my lighter! It was on the ground by my bag and you picked it up! It's GREEN!"

My eyes dart at the lighter held in the other man's hand. It is indeed green, lime green, an everyday Bic lighter. The colour proves nothing, of course.

Variants on their initial altercation ensue, with occasional scuffles wherein the lanky, angry guy tries to grab the lighter. Eventually, I realize that I have a lighter with me. It is a bit nicer than a $1.99 Bic, but I have no great attachment to it. Maybe I could solve this problem?

I reach out my hand and he briefly glances over and takes my lighter... But continues to yell at the other guy, and I start to realize, holy shit, I just gave away my lighter for NOTHING. The fight continues for several minutes thereafter (the bus is still on the way) and finally I can't help it, and assert myself (idiotically) again into the fray: "Just trade lighters," I say.

They both pause for a second and CLEARLY consider it, going so far as to briefly extend their hands, then realize that any arrangement of passing lighters might involve one of them running off with both of them. Too late, I add, "Or just give them both to me and I will pass them to you," but it is too late:

"YOU TOOK MY FUCKIN' LIGHTER!"

So it goes. Felt like I was in a Chris Walter novel for a sec. They were still fighting when the bus arrived, both of them with a lighter, and me with none.

There was actually a bit more to it than that, which I left off FB for brevity - the quarrel continued onto the bus, in fact, with the first guy piling his sleeping bag knapsack onto the bus with his "buddy" in pursuit, yelling through the open door variants on "you took my fuckin' lighter! I'm gonna GET you!" for a few minutes (my former lighter - an eight dollar fancy one that I bought when I bought the joint, to smoke before the last concert I'd gone to, was still clutched in his hand, while they fought over a $2 Bic). Once the bus pulled away, I even had a brief chat with the victim/ lighter thief "That guy crazy, you even give him you lighterrr," he acknowledged at one point. I agreed - "clearly he has some anger issues," and broke out that strangely-officious phrase, "I'm sorry that happened to you" (and made sure, when we arrived at the Skytrain station, that we got on different cars).

On FB, after I posted it, Chris Walter agreed: it was a "very Chris Walter-esque" moment.

Anyhow, there. I survived a venture into the DTES, and maybe survived having been indoors with strangers, and satiated my FOMO, which really, at this point, should be smaller than, say, my fear of dying on a ventilator in a crowded and lonely hospital ward. I think I'm gonna quit writing about live music for awhile, so as not to encourage any false sense of security out there, and I think (I think) I am gonna stop going to shows altogether, folks at least for the rest of the year. Playing Russian roulette with live music seems unwise. Those of you who wish to support the scene can still do so, maybe, by donating to this GoFundMe for this friend of the Judys, for whom - I neglected to mention in my interview with Dennis, below - the evening was a benefit. She was in a pretty awful car accident and could use the support; I coughed up (not literally; no coughing was involved) fifty bucks, in addition to writing the piece below and payin' to get into the show, so I've done my bit.

Now I just need to correct the spelling of Pete Fiend (he's only Feend on FB) and put that link into the interview itself, then I can go back to bed!

Posted by Allan MacInnis at 7:12 AM