Sometimes a song takes time to find its audience. Case-in-point: Brother JT’s “Sweatpants.” Those lucky enough to be working from home during the COVID-19 pandemic will immediately understand the appeal to its ode to “wiggle room,” and even those who cannot identify with JT’s apparent erotic interest in a loose waistband will be amused by his self-made animation, which includes a Lucky Jesus slot machine that spews money out its mouth and images that seem to feature a robotic Brother JT flying, superman-style, into the smiling mouth that opens in a girl’s sweatpants-clad ass. It’s a bit unhinged – but so is our current situation. Could “Sweatpants” have finally found its time? 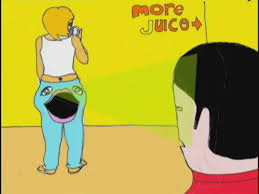 In the event you’ve missed out on the career of Brother JT, a bit of catch-up is in order. His-longer term fans know him as John Terlesky, the frontman of Pennsylvania-based, garage rockers the Original Sins, whose songs ranged from savage, tripped-out Stooges-worship like “AliceD” to much gentler, poppier, more upbeat 60’s-style confections like “Help Yourself.” The Original Sins toured afield – even playing the Town Pump here in Vancouver in the early 1990’s – and attracted a die-hard cult following (local cartoonist and collage artist ARGH! is another fan). Since they disbanded in 1998, Terlesky turned his focus to his more locally-based “solo” project, usually billed as Brother JT or the Brother JT 3, who didn’t tour this way even before COVID-19.


Brother JT’s CDs, however, make it to our shops, and they’re even more varied than the Original Sins’ catalogue. You can’t tell if you’ll get soulful, hip-hop inflected garage blues about taking LSD (like the monumental anthem “Head Business,” off 2003’s Hang In There, Baby) to deeply stoned, poppy, Becklike goofiness like “I am the Blob” (from 2007’s Third Ear Candy). He has also published journals of his automatic writing, sold collages and paintings, and put out an endless stream of very creative, slightly deranged rock videos, including the tripped-out talk show Trippin’ Balls with Brother JT.

And then there’s “Sweatpants,” the song under discussion, off 2013’s The Svelteness of Boogietude. 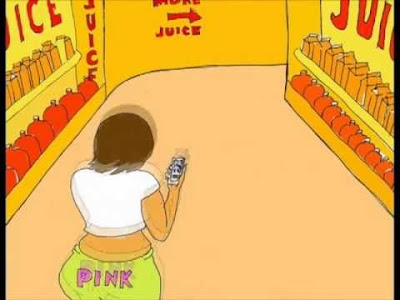 Reached at home, where he’s social distancing like a good boy, JT tells Alienated in Vancouver that “the line that resonates for me is 'no smiles or eye contact allowed in the juice store/just get your juice, pay your money, shuffle out the door', which is kind of how it is now except some people are wearing masks. In a way there's always been social distancing, if not measured in feet then just in fear of engagement with strangers. Probably being on the safe side, but a little sad nonetheless.”

The “juice store” is “not really” a metaphor for anything, Terlesky explains. “I just found myself getting juice (diet V-8 Splash, Berry Blend flavor) a lot there (the local GIANT supermarket). I suppose part of it is that 'juice' is just a funny word and could have various, possibly nefarious, connotations.” The music is “just me on Microkorg synth, guitar, drum machine and vocals (put through a Digitech Whammy pedal). I was recently rediscovering Ween's Pod album and realized it probably had a strong influence on me for this one.”

The video, meanwhile, was animated by JT “very slowly. I got some typing paper and drew each cell, then scanned them into my computer and added colors in Photoshop. Then I dropped the stills into Windows Movie Maker and added crossfades. Very primitive. As far as the content of the little story, I was trying to reduce everything to id-level expressions. The robot in question is drawn to the sweatpants by means of tractor beam (the biological imperative?) only to find himself on a spaceship to a planet with a Jesus slot machine that somehow redeems him. I think. So it's ultimately a hopeful song. I guess.”

What about the lyric, "Oh please Jesus make this fuckin song a hit cos I need money"…? “I thought it would be funny to ask something from Jesus while using profanity. Then again he hung around sailors/ fishermen a lot, and isn't the phrase 'swears like a sailor?’ It'd probably remind him of the good old days, walking on water, et cetera. But the song was not a hit, so maybe not.” 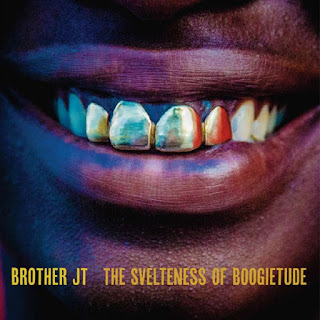 People curious enough to check out the Svelteness of Boogietude may also notice a song called "Muffintop." It is “tangentially” related, JT explains. “I feel a big part of the appeal of sweatpants is the lack of constriction afforded by stretch waistbands, especially to those of the zaftig body type (myself included). This excess flesh needs a place to go, often spilling over said waistbands, which can be not unattractive to some. Of course the mentality that finds no shame in (or even celebrates) this is also at the crux of the song.”

Thank you, Brother JT, for the interview and the music. I am wearing sweatpants as I write this.


Most of Brother JT’s self-released albums are free to download on his website. https://www.brotherjt.com/albums Follow his Facebook page for his ongoing “Psong for a Psunday” series. https://www.facebook.com/watch/BrotherJT/ And also see my large retrospective interview with Brother JT here: https://alienatedinvancouver.blogspot.com/2018/08/from-original-sins-to-brother-jt-john.html
Posted by Allan MacInnis at 1:12 PM