FLAT EARTH lays it out. FLAT. 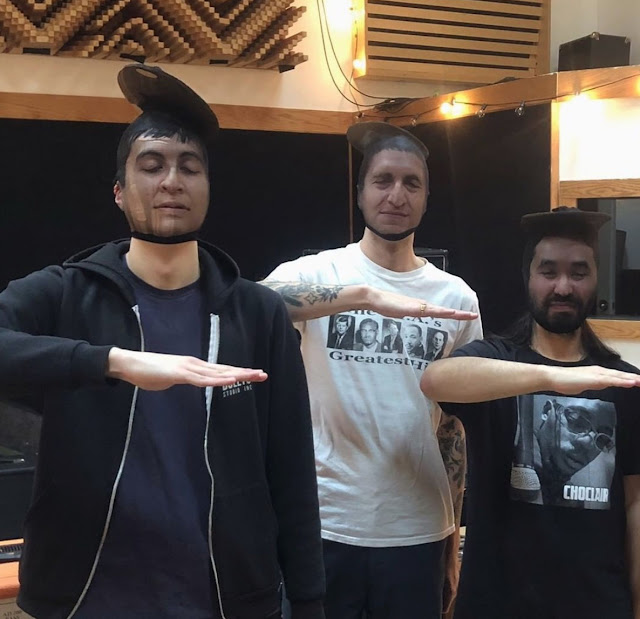 So here's a band that I'm enjoying: FLAT EARTH. In particular, I like "Lizard People People," which my friend and fellow music fan Judith Beeman noted is a real "stomper" of a tune. The wit of the lyrics, written all in caps - by FLAT PAT of the band (at the right)  - needs a minute to sink in. As you will see, the band is singing from the point of view of flat earthers, who are differentiating themselves in classic in-group/ out-group fashion from the David Icke camp, consolidating their identity by taking down their "rivals." Take a minute and listen, and read along:

WE ARE NOT THE LIZARD PEOPLE PEOPLE
THEY ARE FUCKING CRAZY CRAZY PEOPLE
HOW THE FUCK ARE LIZARDS PEOPLE, PEOPLE?
HAVE YOU SEEN A LIZARD BE A PERSON? YOU FUCKING HAVEN'T!

LIZARD PEOPLE ARE A MYTH!
DESIGNED BY THE GOVERNMENT TO MAKE YOU FORGET
THAT WE'RE LIVING ON A MOTHERFUCKING DISC
EVERY DAY YOU'RE LIED TO BY YOUR PARENTS

WE ARE NOT THE LIZARD PEOPLE PEOPLE
THEY ARE FUCKING CRAZY CRAZY PEOPLE
HOW THE FUCK ARE LIZARDS PEOPLE, PEOPLE?
HAVE YOU SEEN A LIZARD BE A PERSON? YOU FUCKING HAVEN'T!

WE ARE NOT THE LIZARD PEOPLE PEOPLE
THEY ARE FUCKING CRAZY CRAZY PEOPLE
HOW THE FUCK ARE LIZARDS PEOPLE, PEOPLE?
BUT SHOW ME A LIZARD THAT'S A PERSON- YOU FUCKIN CAN'T!

With that in mind, and knowing very little about FLAT EARTH, I wrote the band and got answers to some questions from FLAT PAT. I have no idea if the physical 7" of FLAT EARTH's debut still exists... but, just sayin', you might be able to pick it up at the door of Neptoon Records.

Since the band has an unusual point of view (and asked I not reveal certain things about them), the following will have to speak for itself. Having asked FLAT PAT if I could do an interview, I got this back, all in caps, with the subject line FLAT EARTH INTERVIEW TO SPREAD FLAT FACT.


HELLO ALLAN THIS IS FLAT PAT OF THE BAND FLAT EARTH THANK YOU FOR GIVING US A SPOTLIGHT TO SHINE UNDER THERE IS SO MUCH WE HAVE TO GIVE TO THE WORLD NAMELY THE TRUTH ABOUT THE SHAPE OF THE EARTH!!!!!! FLAT IS FACT
-FLAT PAT

So I wrote my questions, and this is what I got back. My questions are in italics, and FLAT PAT's answers are all in caps.

What are you wearing on your heads in the bandcamp photo (see above), and why?

HI ALLAN THE FLAT HAT IS A STYLISH WAY FOR US TO KEEP OUR IDENTITIES HIDDEN WHILE ALSO LETTING PEOPLE KNOW WE MEAN BUSINESS ABOUT FLAT EARTH FACTS.

IN THE SONG I SING "THE MOON IS REAL / A REAL FUCKING SCAM / THE MOON WAS BUILT AND BROUGHT HERE BY THE MOTHERFUCKING MAN" WHEN THEY LANDED ON THE MOON I DON'T KNOW IF YOU KNOW THIS ALLAN BUT IT RANG LIKE A FUCKING BELL! FOR FORTY FIVE MINUTES. THEY DON'T SHOW THAT ON CABLE TV!!!!!! WHY FAKE THE MOON? WELL IT WOULD BE FUCKING EXPENSIVE SO THE COVER UP MUST BE MASSIVE. REALLY MAKES YOU THINK.

I DON'T THINK THERE'S ANYTHING REALLY FUNNY ABOUT FLAT EARTH. I MEAN IT'S FUNNY TO THINK YOU COULD FALL OFF THE EDGE, BUT FOR MANY REASONS THIS WOULD BE VERY DIFFICULT (THE 150 FOOT ICE WALL, FOR STARTERS). PART OF THE WHOLE POINT OF THE FLAT EARTH ETHOS IS THAT THE PERCEPTIBLE WORLD IS MORE REAL THAN THE IMPERCEPTIBLE WORLD, AND FOR THAT REASON AN IRONIC FLAT EARTH SOCIETY IS JUST AS REAL AS AN EARNEST/AUTHENTIC (AND TRADITIONALLY MORE LEGITIMATE) FLAT EARTH SOCIETY, IF NOT MORE REAL.

Would you agree with this observation (apparently from Ayn Rand!): “Don't bother to examine a folly—ask yourself only what it accomplishes.” What is your sense of the meaning of that? What do you think of Ayn Rand?

AYN RAND HAD A WARPED BUT SINGULAR VISION FOR HER WRITING. I REALLY APPRECIATE WRITING THAT SEEKS TO ACCOMPLISH ONLY ONE THING- IE THE DISSEMINATION OF FLAT EARTH FACT! UNFORTUNATELY THE TENETS OF OBJECTIVISM PRECLUDE THE BUILDING OF A CREATIVE AND COMPASSIONATE SOCIETY AND FOR THAT REASON WE HAVE DIFFERING VIEWPOINTS.

I CANNOT STRESS THIS ENOUGH- WE ARE NOT THE LIZARD PEOPLE PEOPLE. I FOR ONE HAVE NEVER SEEN A LIZARD PERSON IN MY LIFE AND THERE IS NO PROOF OF THEM, AS THERE IS OF SASQUATCH. LIZARD PEOPLE OBVIOUSLY DON'T EXIST BECAUSE I HAVE NEVER SEEN ONE. SASQUATCH THERE IS A VIDEO OF HIM, BUT THE VIDEO IS 50 YEARS OLD SO HE IS DEFINITELY DEAD BY NOW. BUT LIZARD PEOPLE- NO VIDEO, NO LIZARD. BY THIS SOLIPSISTIC WORLDVIEW, WE CHOOSE TO LIVE.

THE POINT OF FLAT EARTH IS NOT AS MUCH ABOUT IF THE EARTH IS ACTUALLY FLAT (OBVIOUSLY YES) BUT MORE ABOUT ASKING YOU TO QUESTION WHY YOU BELIEVE THE EARTH IS ROUND! YOU CAN LOOK AT THE EARTH AND SEE CLEARLY THAT IT IS FLAT. YOU BELIEVE IT IS ROUND BECAUSE WHO TELLS YOU??? YOUR PARENTS, THE GOVERNMENT, ASTRONAUTS, RACCOONS. WE ENCOURAGE PEOPLE TO BE OUTSIDE IN THE NATURAL WORLD BREATHING AND FEELING AND EXPERIENCING LIFE THROUGH YOUR OWN PERSPECTIVE WITHOUT THE WEIGHT OF HISTORY AND ALLEGED SCIENCE TRYING TO TELL YOU WHERE THE SUN SLEEPS OR WHAT'S SMALLER THAN AN ANT.

What bands are you influenced by?

WE ALL TAKE TURNS SIGNING UP FOR TRIAL SPOTIFY ACCOUNTS AT THE LIBRARY COMPUTER. WE HAD NEVER HEARD MUCH MUSIC BEFORE WE GOT A LIBRARY CARD. NOW OUR FAVOURITE BANDS ARE CRASS, THROBBING GRISTLE, DESPERATE BICYCLES, STEVE TREATMENT, AND THE NOSEBLEEDS. LAST YEAR WE ONLY KNEW SONGS FROM DIFFERENT YOUTUBE ADS. NEXT YEAR WE'D LIKE TO BE VERY FAMOUS. IT IS A NATURAL PROGRESSION THAT ENDS WITH US BEING AWARDED THE ORDER OF CANADA.

HAVE YOU EVER SEEN ANYTHING SMALLER THAN AN ANT? I THINK NOT.

Have you played any gigs? What bands would you like to share bills with? Who are your favourite bands with non-mainstream views? (Are there any other flat earth bands out there? Are they serious flat earthers, or ironic flat earthers, or…).

WE HAVE PLAYED EAST VAN'S FLAT EARTH FESTIVAL 'FLATLANDIA' FOR THE LAST COUPLE OF YEARS. WE HAVE ALSO PLAYED AT THE RICKSHAW THEATRE AND THE RIO RECENTLY. MORE OR LESS AS HEADLINERS.

THERE ARE NO OTHER BANDS BRAVE ENOUGH TO ADMIT FLAT FACT BUT READ BETWEEN THE LINES IF THEY DON'T DISMISS IT IN THEIR LYRICS THEY ARE AS GOOD AS SAYING THEY BELIEVE IN IT.

How do flat earthers feel about Christopher Columbus? Didn't he prove that the world was round?

CHRISTOPHER COLUMBUS DIRECTED HOME ALONE AND YET WE ARE ASKED TO BELIEVE HE WAS ALIVE IN THE FIFTEENTH CENTURY. REEKS OF FRAUD. SOMEONE SHOULD SMACK A CAN OF PAINT RIGHT IN HIS SMUG ROUND FACE. 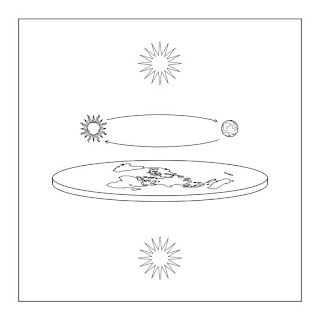 Posted by Allan MacInnis at 9:15 AM