Anyone have this experience? You have a scary health problem. Let's say you have a chest pain, say - a sudden, unexpected one that disturbs you - and you end up being taken very seriously by doctors, given preferential access to medical equipment, rushed to the front of the queue at the emergency ward, because it could be your heart, and medical wisdom rightly decrees that they have to take this seriously. You end up strapped to monitors, running stress tests, and, afterwards, peeling sticky shit off your chest where the diodes or doohickeys - the thingamabobs, man - were attached, and find that the doctors are reassuring you that YOUR HEART IS FINE...

...except you actually didn't go to the doctors to be told that. You went there because you had a sudden, unexpected pain in your chest. You didn't ever actually think it was your heart, in fact; you were just actually hoping that they would be telling you what was wrong with you. Instead, all they were able to do was to rule out the biggest, scariest possibility. "What was actually wrong with me, then?" "Sorry, we don't know." And not only don't they know, they aren't all that interested. "But I didn't go to you to rule out my heart, I went to you to explain the pain I had." "We can't, sorry." "Isn't there something else you can do?" "Well, if you get the pain again, come back and see us. Otherwise..."

That's the nature of medical wisdom right now. There's actually a lot of stuff doctors don't know, but the behaviours that are in place are based on what little they do know. It's a dark universe, and medical wisdom is a small flashlight indeed. And the thing about the experience above is that afterwards, there's always a sort of disappointment that kicks in afterwards, where you realize that in fact, our systems are only really good at dealing with things that they recognize. Otherwise, there are limits to how effective they are, blind spots galore, and often the things that they do tend to look at overshadow the things that they don't.

That's why Google can be useful, still, even in the decade of fake news. As much information is out there, if you are sick, it's useful to do Google searches for your symptoms and see if other people are reporting them widely, especially if your symptoms are not usual ones. It's why I still get comments on a post I did fifteen years ago on sleep apnea and ear infections; doctors didn't know that there was a correlation between the use of CPAP machines and ear infections back when I first when on CPAP, and I got some killer ear infections from following my doctors' advice to the letter. The anecdotal evidence has since accumulated sufficiently that some ENT doctors have heard the news, but I still get comments on the post - because people who find themselves in a medical blind spot are turning to the internet and, weeding through the bunkum and the supplement-sellers, are finding support for things medical professionals didn't know about, that somehow got overlooked.

Similar things are happening with COVID-19, though at a faster clip. For example, there was no mention for the first couple of weeks of the shutdown, while everyone was trying to figure out what COVID-19 did, of the loss of taste and scent, which are now known to be common symptoms. Their inclusion in the list of symptoms came from mounting anecdotal evidence, not from a laboratory or university; it was people reporting their symptoms in sufficient numbers until they finally got noticed.

But while loss of taste and smell have now been, uh, "canonized" as official symptoms,  interestingly enough, the gastrointestinal manifestations of COVID-19 are not being written about so often, still. Almost every article on the disease lists the known symptoms for the most DANGEROUS type of COVID-19, which is the respiratory variant, where dry cough and difficulty in breathing are things to look out for. But vomiting, nausea, and diarrhea are also symptoms of COVID-19; and in some cases, are the only symptoms, not being accompanied by any of the usual respiratory ones. If you've had an upset stomach and a couple of weeks of diarrhea, absent of other symptoms, you might still have COVID-19 and not realize it, because in fact unless you Google "COVID" and "diarrhea" (which is what I did), you might never hear about this at all.

Fittingly, even the two articles linked in the previous paragraph seem to contradict each other, with the first seeming to suggest that patients with gastrointestinal symptoms are less likely to be cured, while the second suggests the form of the disease is "milder" for patients who don't have the respiratory variant. (I am hesitating to say that the difference in symptoms is caused by different strains of the virus, note, because I don't know that this is known, yet, though there is, indeed, more than one strain of COVID-19 out there, and some behave differently from others). I've been asking doctors about these things, because, you see, on Wednesday morning of last week, I woke up nauseated and aching, and spent the first hour of the morning alternating between rounds of vomiting and diarrhea, trading bathroom occupancy with my wife, who has also been battling nausea and diarrhea. We both have other health issues, and are on meds that can have side-effects, so at first, it didn't seem a big deal; in my case, I thought that the symptoms I was suffering from came not from COVID-19, but as a delayed reaction to the Metformin I've been taking (I have type-2 diabetes). Nausea and such are common side-effects of Metformin, so I was pretty confident that that's all I was experiencing.

My doctor, when I called him, was less sure, and suggested I go in for COVID testing. Turns out the facility we've seen being erected on Boundary Road, a few blocks from us - with white tents and signs limiting admissions and telling you to keep your windows up until told to do otherwise - is a drive-thru testing site. Within an hour of my phone consultation with my doctor (doctors are doing phone consultations now), I had a confirmation email telling me to report to the site between 12 and 6. At her insistence, Erika drove me; we gloved up and made makeshift bandit masks for ourselves, with Erika stapling parts of a former bedsheet around our faces, since even if we were not in fact infected, we would be going to a space where, presumably, there would be some actual sick people. We checked in at the gate, were given sheets of paper with test results and instructions for how to proceed while waiting (it would take three to five days, we were told), and got in a line of vehicles waiting for their turn at the main tents. I snapped a few photos, up until we got to the sign that said we weren't supposed to be taking photos. Oops! 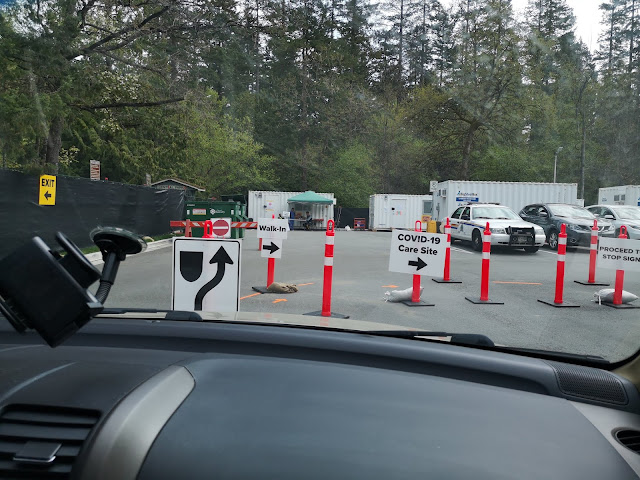 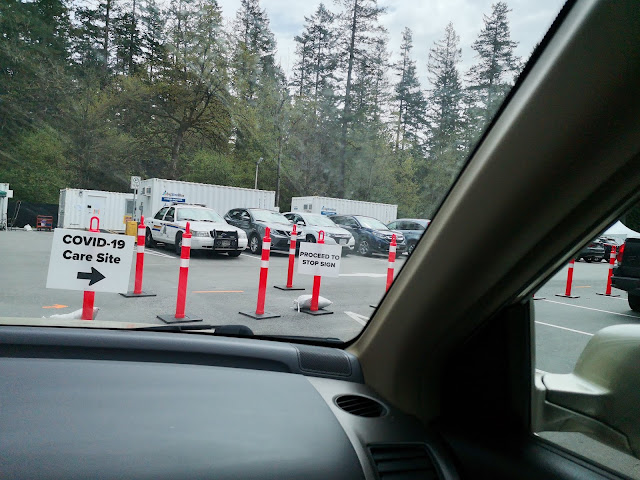 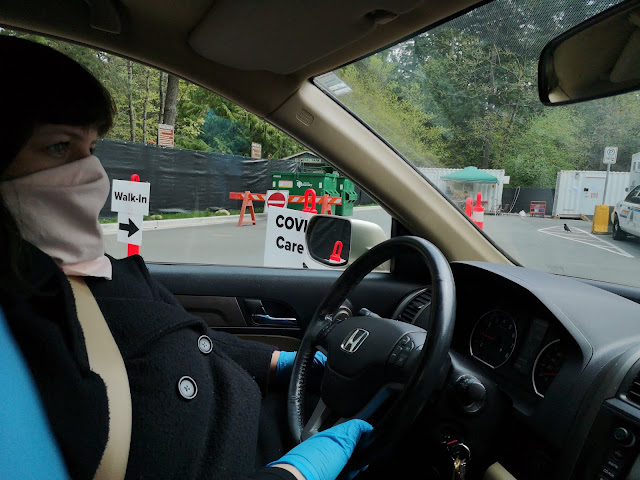 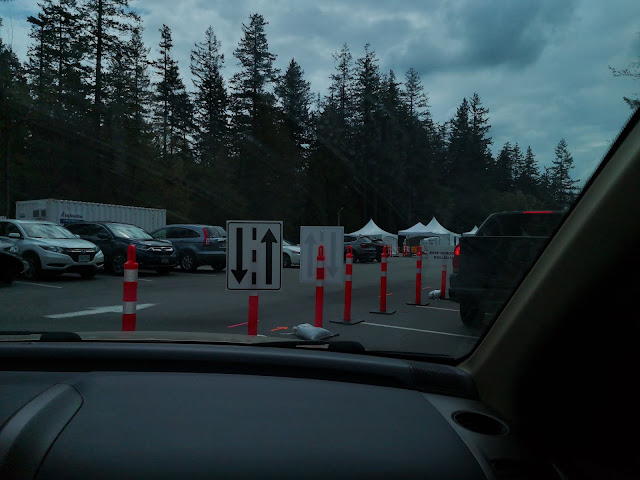 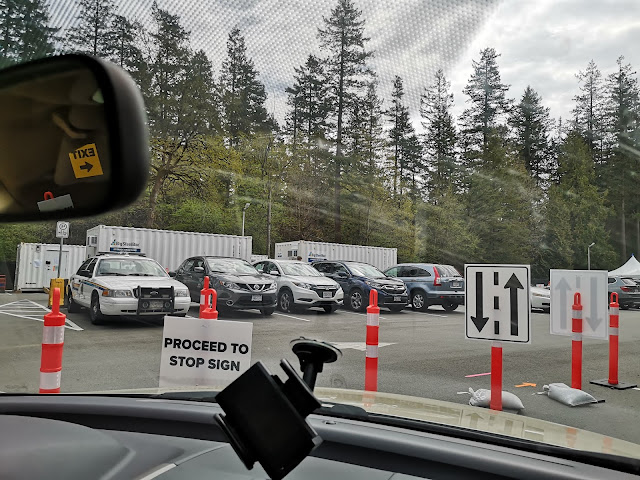 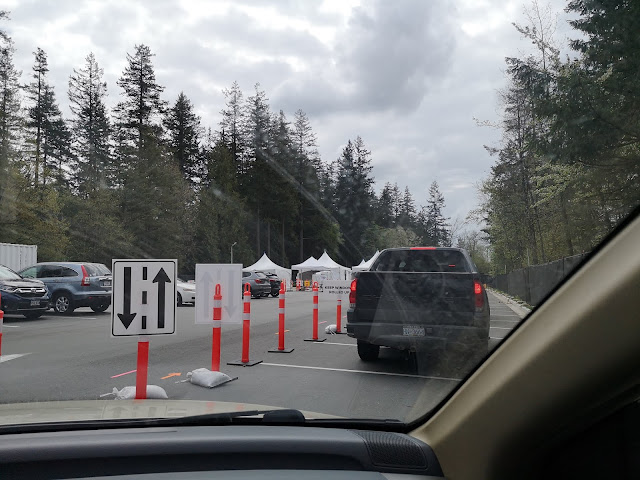 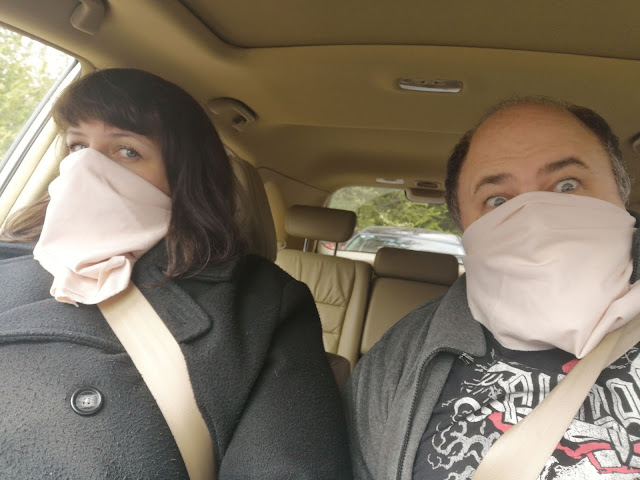 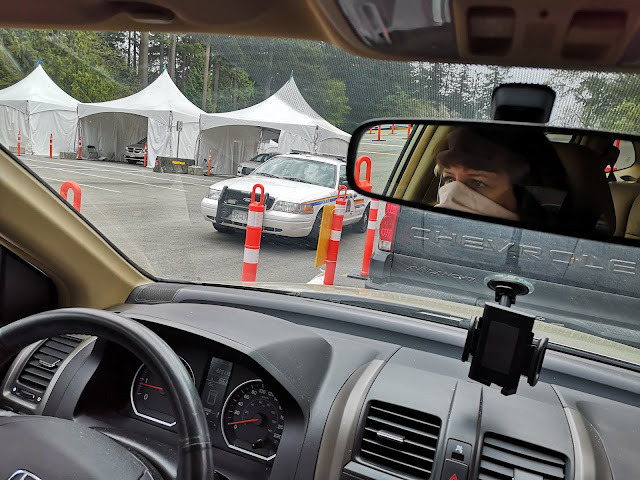 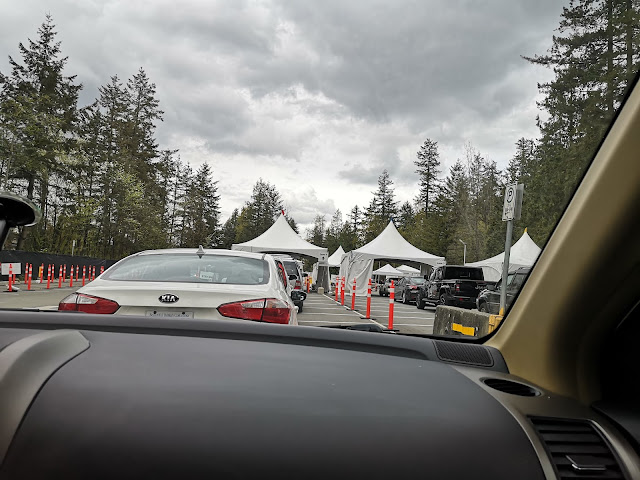 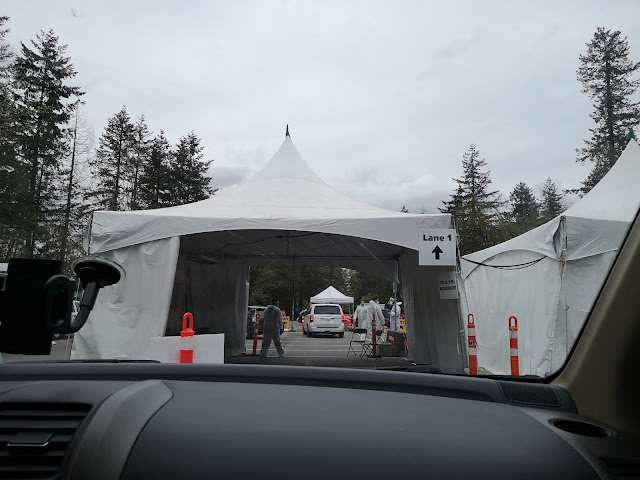 When we got to the front of the queue - which was operating just like a restaurant drive-thru, though with more protective clothing for people staffing the tents and the option of doing walk-ins - we asked the nurse if Erika could get tested too. "Do you  have symptoms?" We said yes, and both went through the checklist, the nurse checking off some boxes and not others. I don't recall if diarrhea, vomiting, and nausea were on her list, but the usual suspects - fever, aches, cough, sore throat, shortness of breath - all were. Finally, we drove up, and Erika was tasted first. They swabbed us - sticking a long, thin swab not much like a q-tip so far up our noses that our eyes watered - and made no mention of the fact that if you have the gastric variety of the disease, you really also need (apparently) to provide a stool sample.

When I finally got through the number we got, the nurse I spoke to explained that at the moment, stool tests were not available, nor were antibody tests. She said something that amounted to "we're doing the best with what we've got," and told us we should still self-isolate for ten days since the onset of our most serious symptoms, since the test result might not be entirely conclusive.

However, the results were, indeed, negative. We don't have COVID-19.

I have no idea, in fact, if that's good news or bad news. If the "diarrhea version" of COVID-19 is the milder version, and confers immunity, it might actually be kind of desirable to have it and be done with it, since when it is gone, we might be immune to the more serious version. But those are big ifs, and in the face of so many unknowns - as a Facebook friend pointed out - we're probably better off with the negative results.

And so it goes. When I woke up the next morning with nausea, again, just to test it out, I went off Metformin for a day, and found the day after that I had no nausea at all, and that my stools had returned to a normal consistency. It probably was the Metformin all along - confirmed by my having gone back on it last night and having an upset stomach and diarrhea again this morning. Meantime, we're doing our best to stay in: we've skipped exercising, taken no walks, and have ordered our first groceries-by-delivery, which are due tomorrow, I believe.
Posted by Allan MacInnis at 9:42 AM