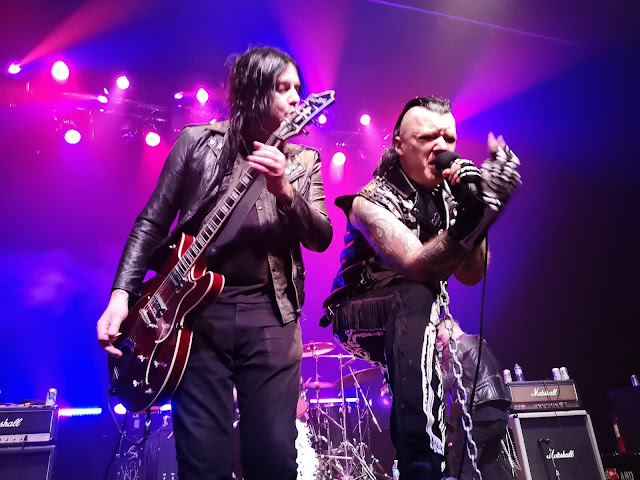 Sometimes I feel embarrassed of past interviews I've done. They don't go away, either: when I fuck up, when I phrase something in a way it turns out my interview subject doesn't like (and, it's like, on the Straight site, so I can't tinker with it), write something of deeper-than-average stupidity, or when I ask a question that ultimately is revealing of an incorrect attitude towards my subject, or my ignorance, or so forth (but don't realize I'm doing this until after the piece is out there)... my embarrassment lives on in my writing. It doesn't happen often, but when it does, it's out there for all to see.

I don't know if it made it into either interview I did with Billy Hopeless, but I kinda feel embarrassed about the attitude I had about Billy before last night. It's not altogether unlike my attitude towards Nardwuar before I got to see him at work up-close: I thought of Billy as a colourful local character, of some talent, but, like, when he invited me to shoot pinball with him for our first interview (or suggested we go for German sausage at our third), I wasn't really thinking I was in the presence of someone quite as fucking AMAZING as he was last night, you know? I mean, he probably preferred it that way, like Lemmy, I think, prolly preferred hanging out with people who were just people with him, which was definitely the vibe I got off him backstage at the Vogue. I tried to stay normal, on the outside, but I was nonetheless going I AM IN A ROOM WITH LEMMY! the whole fucking time, inwardly, probably with a slightly elevated heart rate, in much the way, say, that the guys who were shooting pool with Flipper at the Astoria last year were going, I'M SHOOTING POOL WITH DAVID YOW!!! inside them, even while trying to be all casual about it.

I confess, I stand embarrassed to admit: I was not going I'M PLAYING PINBALL WITH BILLY HOPELESS, you know? (I mean, I even beat him one game, and wasn't that impressed with myself). Or, say, BILLY HOPELESS IS EATING SAUSAGE WITH STINKY CHEESE ACROSS FROM ME! ...I was more like: gotta hand it to the guy, he has cool ideas for an interview setup. Most people I interview in person just suggest a coffee shop somewhere. I was positive, respectful, etc., but still, you know? I dunno if it came through in the article, I don't think it did, but there MIGHT have been at least a smidgen of condescension in my attitude. 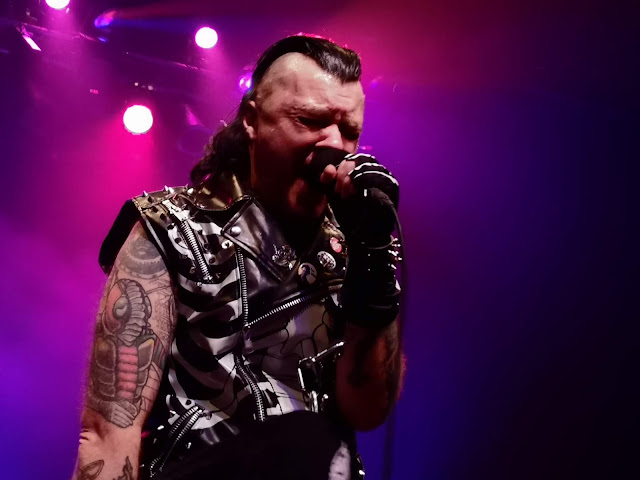 So I guess I need to adjust my attitude, here. The Black Halos (it turns out) are a phenomenal fuckin' rock band, best experienced live. Last night at the Rickshaw was great. And much as I enjoyed hearing Rich Jones play - I actually bought the new Michael Monroe Band album; it's kinda great, tho' at the moment a pricy special order - it was ALL about Billy last night. That is one charismatic and compelling frontman, WAYYYYY more compelling and memorable than he was the few times I saw him with the Bonitos, where he seemed a bit, I dunno, full-of-himself and debauched...?

I mean, he still seemed kinda debauched last night, but his charisma was fucking turned ON. It wasn't the same experience at all. He seemed stronger, healthier, way fucking more convincing, even a bit terrifying, you know? Holy shit, Billy, I hardly knew ye.

Anyhow, I don't feel embarrassed so much of the written artefacts now - I can live with them, I think! - as I do about not realizing just how stunning a bandleader Billy is when I was doing them. Never saw him quite like I did last night, probably because I'd never seen the Black Halos before. If it is in any way unclear: they were fucking amazing! I was unsure about the wisdom of having two Black Halos shows back to back, and, before last night, not certain I was gonna go to the second show, and now I feel a bit dumb about that, too. (Particularly since the Rickshaw was pretty packed, suggesting everyone knew better than I did).

If you missed last night, and you like punk rock, you should come tonight. Only rarely do we get second chances in these matters. It'll be a show you'll kick yourself for missing, otherwise, and I believe there ARE tickets available. I shot some video - go find it, if you need convincing. There was even a special guest - Bruce Wilson of Tankhog/ Sunday Morning joining Billy onstage for a Dead Boys cover - though I have no idea if the band plans something different for tonight... I would hazard a guess they do. 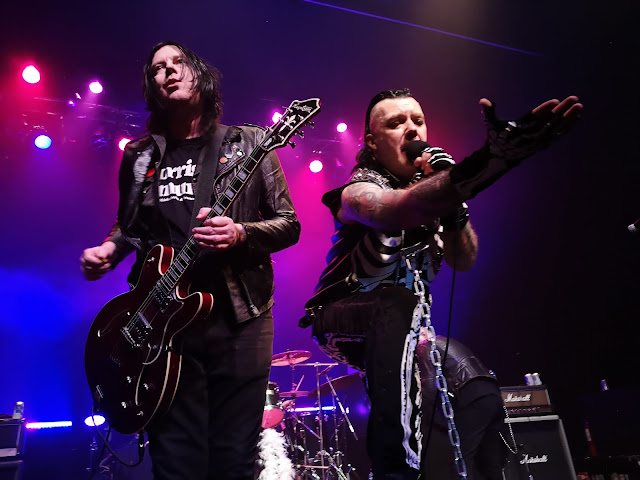 Actually, come to think of it, the Bonitos were pretty fucking cool that night at the Venue for Japanese Earthquake relief, where Billy and Alexa Bardach, I think it was, back when she was in Piggy, squared off around a Stooges cover... that was pretty fucking compelling too, but mostly because Alexa was so intense in her energy, stalking Billy like she was just as likely to pounce on him as sing, albeit unclear if that would have been to eat him alive or fuck him or maybe both, like Beatrice Dalle in Trouble Every Day. I think Billy was kinda surprised by her too, as I remember it... Not quite sure what was going on there (I suspect large quantities of alcohol were involved), but it was pretty damned memorable!
Posted by Allan MacInnis at 6:43 AM

Actually he was eating pretzel with stinky cheese. I just remembered....