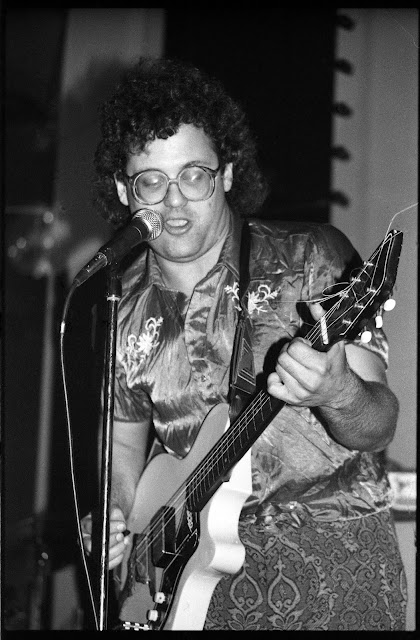 Eugene Chadbourne with Shockabilly in Vancouver, Oct. 1, 1983. Photo by bev davies, not to be reused without permission

“I think somebody should make a movie about Eugene, if they haven’t already. I think he’s an absolute American treasure. He’s an American original and has his own kind of iconoclasm, that’s not everybody’s most digestible kind of iconoclasm. I just find him completely delightful and remarkable.” – Nels Cline, 2006

Legalization has been very good for my appreciation of the music of Eugene Chadbourne. The ease of access to music-enhancing compounds has meant a few pleasantly baked excursions into some of my favourite Eugene Chadbourne homemades, like The Intellectual and Emotional World of the Cockroach or ChadKlappMuntz or New Directions in Appalachian Music or Don't Burn the Flag, Let's Burn the Bush or the amazing Pachuco Cadaver, a collaboration with Jimmy Carl Black consisting entirely of Captain Beefheart covers. It's been some time since I've seen him, at the Kozmic Zoo back in 2011. Life got serious for awhile, with my father's death, my mother's death, my cancer surgery, various employment issues, and (thank God for) my marriage, so the vast perceptual freedoms and somewhat unhinged pleasures of Doc Chad weren't a good fit for me for awhile there. Looks like I'm just in time to revisit his music, though, since he plays Pat's Pub this Saturday (alongside Ford Pier and Stephen Hamm Theremin Man).

My first interview with Doc Chad appeared - shortly before I first saw him live - in a 2006 issue of the Nerve Magazine. There, we talked about how his covers of country and western songs have a particularly special place in my heart. At that point, I wasn't a big fan of Merle Haggard or Willie Nelson or Johnny Paycheck or Roger Miller, and to the extent that I knew their songs, it was because Eugene Chadbourne had covered them, alongside the deranged acid-freakouts of Shockabilly or his more avant-garde/ improvised moments. I had his album There'll Be No Tears Tonight, which is a great place to start with his music, if you don't know it (and features an all star band, including John Zorn, Tom Cora, and Shockabilly's David Licht) and it's still the only way I know some of the songs on it (I don't think I've ever tracked down the original of "The Last Word in Lonesome is Me," in fact; I'd probably prefer Eugene's reading of it, anyhow. What about Eugene's treatment of these songs makes them so accessible to non-country fans like me, though? 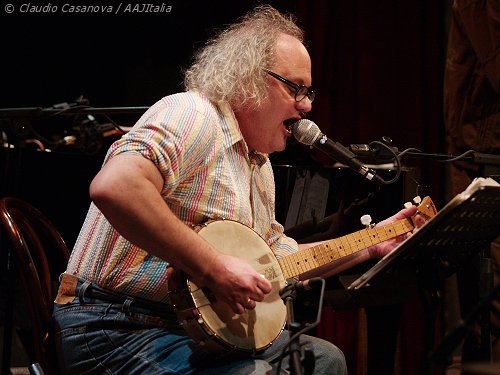 I put the question to Doc Chad. “I don't know the answers to any of this for sure,” he wrote, “but I do hear a lot of it. In the '80s, I would hear that albums such as There'll be No Tears Tonight and Country Protest ‘turned on’ punkers to country music. I just assumed they hadn't heard anything they liked yet in the genre and I just happened to be that.”

A propensity for covering songs that may not be warmly received by certain contingents of his audience is something Chadbourne has in common with a musician whom he describes as a “huge inspiration,” Phil Ochs. “I saw him several times when I was a teenager,” Chadbourne says. “I always had to go alone because all my friends hated his voice.” The idealistic folksinger, who was initially the equal of Bob Dylan, but whose career ended in the early 1970s in a shambles of mental illness, alcoholism, and, finally, suicide, had, at one point, taken to coming onstage in a gold lame suit and interspersing his anti-war songs with surprisingly respectful renditions of “Okie from Muskogee” and medleys of Buddy Holly and Elvis Presley tunes. The one recorded document of this stage of Ochs’ career – often regarded as a sign of his decline – shows an audience that is definitely not receptive to his song choices.  “I thought it was weird when that Gunfight in Carnegie Hall disc came out with the audience getting upset,” Chad says. “I thought New Yorkers must be really uptight. In Boulder, Colorado, he did his rock and roll shtick and nobody objected at all.” The tragedy of Ochs’ death is only augmented, Chadbourne feels, by the “several stupid biographies that came out after he killed himself.”

It’s tempting to call Chadbourne a postmodernist, given the diversity of his musical influences, but I somehow doubt he would take to the label. “I like that comment of Captain Beefheart's, ‘my bottle doesn't have a label on it;’" he tells me. “I prefer the kind of labels that relate to buildings: garage rock, chamber music, loft jazz, bedroom tapers...” I asked him about his rather unique fusion of high and low culture, and he responded that he knows the separation “is there in the minds of some people but that is not where I live,” adding that the “worst aspect” of both the highbrow and lowbrow worlds “is the distaste they might have for each other... I am proud to say I relish both.”

I have a current interview with Eugene Chadbourne online on the Straight website, but I have various outtakes - stuff I just couldn't easily jam in to the article without making it overbearingly huge. For instance, I asked if Doc Chad preferred spaces like the Western Front - which boasts a bit of an artier, more sophisticated, but maybe less expressive crowd - or if he'd rather play bars (where things are a bit more raucous, but not always in good ways). "I am afraid my answer about venues might not be that interesting," he replied. "All I care about is that there is a music stand there or they can get one and there is enough light in the facility to see what I am doing, i.e. it is not lit like a bordello. As stumbling around in the near dark is apparently a cool life style for many, I am not sure I will ever solve this problem..."

Having chatted with Noelle at the Black Lab about what to me seems like the weird underground resurgence of cassettes - and knowing that for years, Doc Chad distributed his home-recorded albums in that format - I asked if he ever got requests for cassettes, these days. The answer is yes. "One thing that is amusing is collectors are looking for actual copies printed in the 80s, which quite often won't even play anymore. They are disappointed, some of them, that I make new copies, often with added material and each completely unique."

Eugene does have a few of his old cassettes, including some that he gave people years ago, which find their way home again. "Some people that bought lots of them years ago show up and just give me a box when they are cleaning up their place." But Doc Chad, who labours hard to make unique and intriguing covers for his CDr releases, doesn't really feel any nostalgia for the technology.

So what about recent vinyl releases? There have been some, it turns out, but he doesn't always list them on the House of Chadula website, "because I don't have endless supplies...Feeding Tube has done a series of solo material spanning the late 70s to early 90s, none of which was released before other than on my House of Chadula series. Amish records released the two record set 3 Characters with me and the Sunwatchers several years ago." (This is the album of Minutemen covers I mention in the Straight piece). There's also "Pleasures of the Horror, a collection of songs about and from horror movies, was released I think three years ago by the French Bisou label."

That's all I have for outtakes, but here's something from an interview I did with the Skinny, where we talked about Chadbourne and Jimmy Carl Black's “Jack and Jim” tour of Japan in the summer of 2008.


Only available through Eugene, this disc includes some Captain Beefheart tunes, a cover of “Smoke On The Water” (“done for the Zappa night in Tokyo, because I was looking for songs that mentioned Frank,” Chad explains on his site) and the original, “I Got More Pussy Than Zappa,” about Jimmy Carl’s success with the ladies. Contrary to rumours that FZ had a ridiculous number of notches on his bedpost, Chad tells me that he thinks “just about everyone got more pussy than Zappa, from the sound of it, but Jimmy for sure.” I asked Dr. Chad if he had any stories about Jimmy Carl.  “I do not really know of one story,” he responded. “It’s the man's whole life that’s so fascinating. He’s the only friend I have had that was not only a drummer but ran a donut shop, painted houses, was in the Air Force, rode in a rodeo... and back to pussy, lost his virginity in Juarez at the age of 12 in a place called Paris de Noche to a woman named Big Bertha.”

Jimmy Carl Black is no longer with us, sadly - nor are Frank Zappa nor Captain Beefheart - but Vancouver audiences have a very valuable opportunity this weekend, to see music from an iconoclastic, singular genius, and they shouldn't waste it. Eugene doesn't tour up here as often these days, and - I mean, with Ford Pier and Stephen Hamm on the bill, how could this be anything short of an amazing night of music?

Apologies to Rich Hope and the Vicious Cycles, playing down the street at the Rickshaw, but I'll be at Pat's Pub Saturday for sure.