Vikings and Pagans and such: Amon Amarth and Arkona

Okay, so: it looks like I will not be talking to Amon Amarth. I have tons of questions for Johann Hegg - whom I've never gotten to speak to, despite having interviewed Amon Amarth twice (best instance is here). Should be a mighty show, but the fun would have been asking Hegg how he feels about groups like Sons of Odin, say, or the scene in Lords of Chaos where the Varg-character makes a pretty potent point of the "disrespectfulness" of building a Christian church over a sacrificial altar to Odin. On safer ground, I'd be curious to see how the Viking worldview has influenced his own life (or asking him about Grimfrost, or his acting experiences). It interests me that Viking/ Pagan culture is an example of an actual, if you'll pardon me, "white culture," that was oppressed and overrun by the forces of Western Civilization; normally when you get white people talking about having pride in their heritage, it's dweeby neofascists who actually are trying to cling, whether they realize it or not, to a long-held position of cultural dominance, but European Pagan culture is actually something quite different, a historically oppressed minority culture, who seem to have a pretty good argument for wanting to take pride in their lost heritage (as long as we keep church-burnings and racism off the menu). I'm an outsider to it all, but it's really, really interesting to contemplate, and raises questions I'd love to get answered. 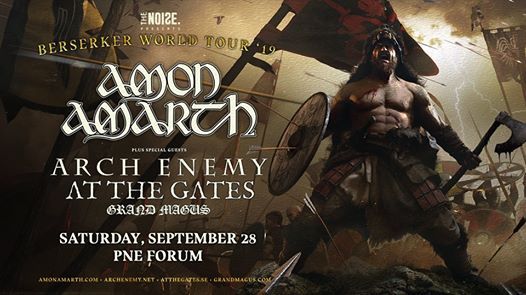 Alas, it looks like that interview won't happen. It's not like they really  need the press, at this point, and I don't suppose they necessarily relish the thought of wading into such problematic areas. I can live without it, I suppose. Bye, Hegg!

I also will not be talking to Arkona, the Russian pagan/ blackened folk metal band playing the Rickshaw September 16th, but that is a show I'm even more excited about, since as far as I can see, Arkona actually are involved in Pagan practice (Hegg and company I think are just mining a fertile trove of stories for lyrics; sounds like they're not sacrificing anything to Odin, any more than Slayer are sacrificing to Satan). I have sent questions to the band - who, because of language barriers, only do email interviews, apparently - but as was my experience a few tours ago, they did not get back to their publicist. My questions may have been too many/ too difficult/ too controversial, I don't know. (I almost always send more questions than I need answers to, so the band can pick and choose).

So there's not much that I can offer by way of new information about either of these bands, but if anyone's curious, here are the questions I prepared for Arkona. The openers for this "Pagan Rebellion" tour also sound pretty great - especially Metsatöll, from Estonia, who have been around for some 20 years, without my having noticed them - so I think this is a must-see show, actually. Arkona's official website is here, by the way. 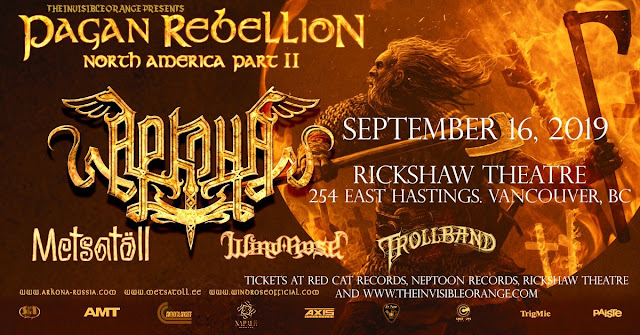 Please ignore any questions you don’t want to answer, or skip parts of questions, or such. I have given you a LOT of questions. You don’t need to answer all of them! But I hope you can answer SOME of them. I’ve divided this into questions about the band’s “beliefs” and lyrics, and questions about your music.

Part One: Questions about Your Beliefs

1. I am curious about the kolovrat. Can you explain the meaning to the band? You used the kolovrat in your original logo, then decided to stop using it – did it draw controversy or otherwise cause problems? Why did you change your logo? Does the current logo have any meaning to it?

2. Tell me a bit about Jaromarsburg on Kap Arkona. Besides being a pagan city destroyed by the Christians, what does it mean to you? Do you have any personal associations with the city?

3. Were you raised Christian? Do you have hostility to Christianity? Is that more about the history of the religion, or things you find damaging about the ideology or beliefs of Christianity? (Is there anything you like about Christianity?).

4. Was there much manifestation of the whole black metal church-burning thing in Russia? Who was behind it, if so? How did you feel about it? (I can find stories about some teenaged Satanist named Ignat Sarapov, who burned a church, and about apparent Nazi church burnings in the Ukraine, but the stories I am finding online don’t connect to black metal per se. But you probably know a lot more than I do…).

5. Do you identify as a Rodnover? If so, how did you get interested in Rodnovery? It seems like you have beliefs that you are trying to communicate to the audience and encourage – that it is not just entertainment? Do you practice ritual in your personal life? Do you see concerts as a sort of modern form or ritual? Do you get a lot of support or feedback from other neopagans? (How do you feel about North American manifestations of neopaganism, like Wicca?).

6. A lot of metal bands in North America – like Unleash the Archers, say - are kind of separated from their European ancestry, so you get bands that sort of base their lyrics in fantasy, Dungeons and Dragons, Tolkein, movies, the Society for Creative Anachronism, or just stories they make up. You actually have tradition to draw on. Do you still enjoy the music of bands that take more from fantasy and fiction?

7. I gather that there is a kind of racial element to the beliefs of some Rodnovers – that some people associated with the movement take pride in their Slavic blood and, for example, don’t believe in intermarriage with non-Slavs. That kinda brings us back to the whole Nazi issue. Do you have any sort of belief about the importance of having pure, Slavic blood?

8. Is the band or its music ever confused with the Polish black metal band – who I believe *are* part of the NSBM movement – also called Arkona? (I enjoy their sound but I suspect if I understood their lyrics I would be horrified).

9. In Communist times, did the government disapprove or in any way try to suppress Russian pagan practice or belief? I’m not quite sure when you were born, but did that affect any of you as children…? Was your heritage something you learned a lot about in school, or was it suppressed or ignored?

10. I know there are songs in your catalogue about nature – like “Bolo Mne” on Slovo, about “the tormented souls of trees,” and what we have done to the planet. But I have also seen you wearing animal furs on stage, and playing instruments presumably made from animal skins and bones. I’m curious if any of that has drawn trouble (from anti-fur activists, for example?). Is anyone in the band vegan? Do you think it is natural and normal for humans to use animals for food and clothes? Would you want to live in a vegan world?

Part Two: Questions About Your Music

1. I know almost nothing about Russian folk music. If I wanted to understand or research the “folk” side of what you do, who or what should I listen to?


2. Personally, I love Slovo, with its really complex orchestration, strings, and abundant folk/pagan elements. It remains my favourite of your albums (and it helps that that was the tour where I first saw you). Do you have plans to make music like that again, or are you always moving/ changing your sound?

3. I don’t know your whole catalogue, but it seems to me that Khram is your most “black metal” record yet – your darkest, heaviest, and most despairing. What emotions went into making it? Is there a theme to the album? How has your fanbase responded?

4. Is there any pressure (from fans, or labels, or so forth) to make music in one particular style or other? Does Khram represent a decision to distance yourself from “folk metal,” or will you return to that style in the future, or…?

5. What performers inspire you? Have you ever gotten to share a stage with any of your heroes?

6. What do you count as the band’s greatest successes to date – the things you are proudest of?

7. You have already toured Khram in Vancouver – a show I missed, so thank you for coming back so soon. Do you have any particular connections with the bands you’re touring with, this time? How do you go about deciding who to tour with? Do you share resources?

8. Does being from Russia an advantage or a disadvantage in terms of touring? ...This question actually comes from Brittney Slayes of Unleash the Archers, who is a fan. Her original wording: “Seeing as we are both from secluded northern wastelands - oops I mean countries - did the band find it hard to get noticed in your early years? Or was it relatively easy being that you are close to Europe and touring opportunities seem endless out there?”

9. Is English much of a challenge for you? Are you studying to improve your English? Do you have people who help with English translations of lyrics? Are you getting help with an interview like this, or are you using Google Translate, or…?

10. Is there anything you want to say to Vancouver audiences, any specific associations with Vancouver, things you like to do here, stories to tell…?

That's all I had for her. I think between two separate tours I have sent questions through their publicist half a dozen times, now, to no avail. So fuggit: I've bought my ticket and will content myself with fandom. Not sure how I feel about everything they do, since I don't always understand it - they sing in Russian, and the sunwheel I ask about - the Kolovrat - on the one Arkona t-shirt I have makes me a little skittish, to be honest - but I am absolutely sure that they're a great live band, and that'll have to be good enough for now!
Posted by Allan MacInnis at 10:05 AM