A week's worth of concert photos: Crummy, DOA, Grand Magus, At the Gates, Arch Enemy and Amon Amarth

At the tour kickoff gig the other night, as a "congratulations on touring Japan" present, I got Bert Man a gift: I had stumbled across a copy of How to Read Donald Duck, which was written under the Allende government of Chile, to protest the ways imperialist/ capitalist messages in Disney cartoons were being used to undermine the socialist government there, prior to a CIA-staged coup (Bert and I talk a bit about his history in Chile here). The book was co-authored by Ariel Dorfman (now also a Canadian, I believe), whom some of you might know better as the author of the play Death and the Maiden. Anyhow, ironically, Bert had worn his coveted Condorito t-shirt that night, and described Condorito as a scruffy antithesis to Scrooge McDuck. I don't know anything about that, but it was definitely an appropriate gift. Shot some video (alas, my phone and Youtube want to put "Andy Warhol" sideways, but if you're a Bowie fan, FIND THE NEW CRUMMY CD, it's a pretty great reading of the song!). Other highlights of the night included discovering that the multi-pierced and efficient counterwoman was none other than Bloody Betty, last seen on this blog smearing fake shit on me and breaking an (also fake) bottle on my head; I got to issue the delightful sentence, "I didn't recognize you - you weren't in costume!" Also really enjoyed talking with a slightly soused Orchard Pinkish, who offered a really fun anecdote about seeing the Dayglo Abortions the night some NeoNazis came to the show (I will leave this story unquoted, however, since we were just two-guys-in-a-bar, not interviewer-interviewee). Also discovered that LanaLou's have wicked french fries, which they hand cut and blanch themselves - it takes longer, but it's worth it; and that they'll serve you a Guinness in a Bud Light glass (which probably there should be a law against. 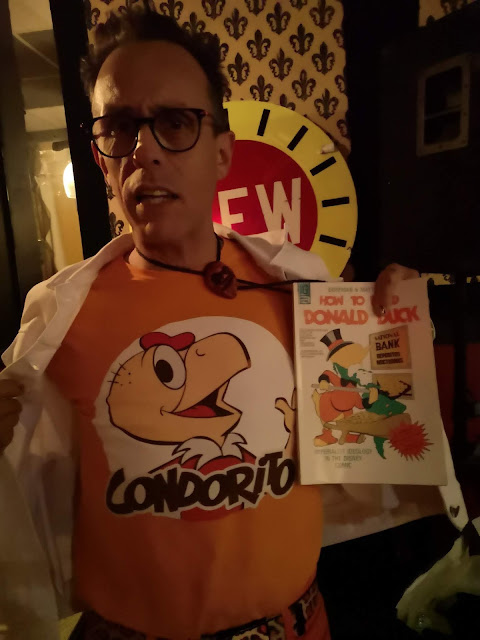 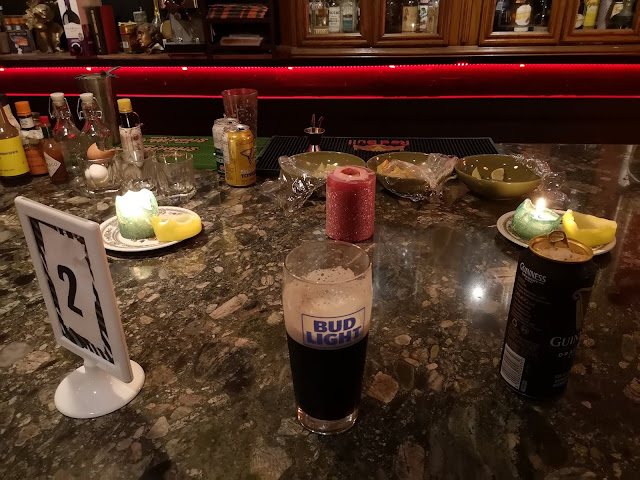 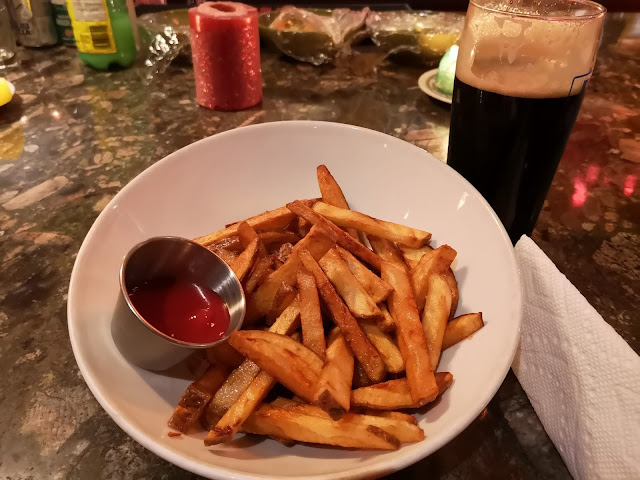 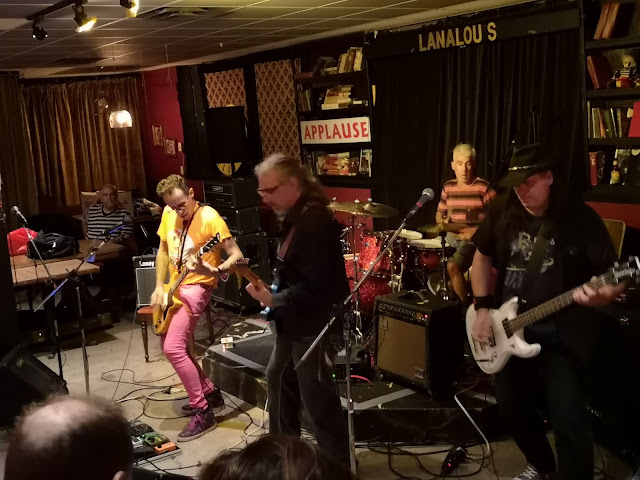 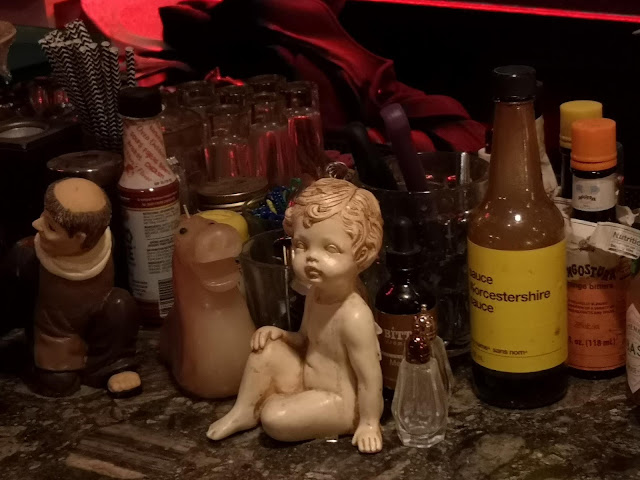 I didn't get many good photos at the DOA show, but I shot plenty of clips and had a fun chat with Joe (and another with his son, who was manning the merch table). Not as much speechifying as I would have expected - maybe it took place before I arrived - but DOA played a wicked set, and I got to chat a bit with NDP campaigner and frequent Alienated in Vancouver blog commenter Mr. Beer-n-Hockey (or however he punctuates that) about time he has spent helping Joe... again, some conversation took place that wasn't exactly for print! Highlights were seeing Joe get kids moshing to Johnny Cash and BTO covers and the ebulliant appearance of Ford Pier on "Disco Sucks," which I captured on video (middle song of this triptych). 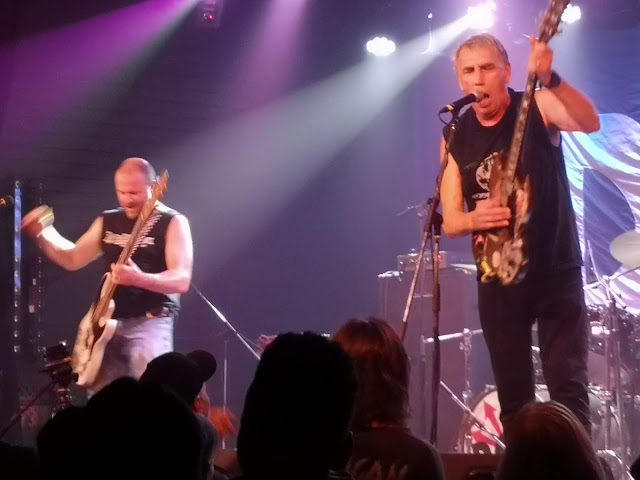 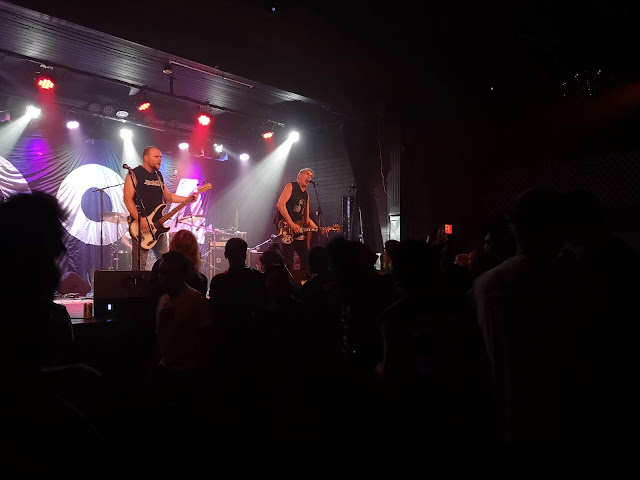 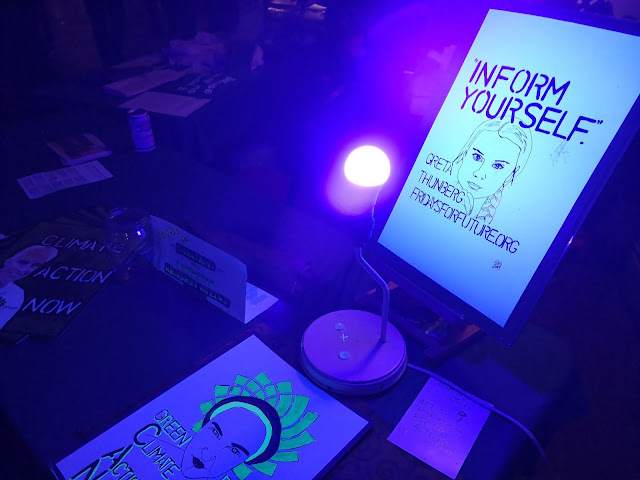 Also had a great time at the Grand Magus/ At the Gates/ Arch Enemy/ Amon Amarth show. The highlights of the show proper were probably how eagerly the audience (doubtlessly mostly NOT there for Grand Magus) gamely sang WHOA-ohh-whoas during the breaks in their song "Hammer of the North," which they continued to do even after the band had left the stage; and just seeing how many people filled the giant hangar that is the PNE Forum, which seems more like a place you would stash tanks than a venue for a rock show. That was one well-attended show - nice to see Amon Amarth getting a next-level venue (next stop Rogers Arena?). The non-band-related highlight was hanging out with my old buddy Gerhard, a musician who has a longer concert history than I have, and a ton of bragging-rights concerts (Zappa, Beefheart, Iggy Pop with David Bowie on piano, etc). Gerhard and I used to work together at a Rogers Video in Maple Ridge in the early 1990's, and hadn't seen each other since then, losing touch until I ran into him at a Television show at the Commodore a few years ago (then connected with him on Facebook). Nice guy! Otherwise, show-wise, I used inside connections to get a couple things signed (yay!) and bought a Berserker t-shirt (speaking of next-level, I am now buying 3XL shirts, since the 2XL ones are getting snug... Need to get some exercise!).. If I'd realized that Amon Amarth were gonna be using a "Viking horn" helmet for a drum riser, I would have given Hegg a chance to clarify that in fact, Vikings did not WEAR horned helmets - that that was, apparently, a misconception popularized by Wagner (look it up!) - I had seen him mention that it other interviews online but hadn't realized how relevant it was. Anyhow, whatever - "poetic license." Really fun sets from all four bands, with At the Gates really getting thrashy. I was disappointed Arch Enemy skipped "Blood in the Water" but I'm glad I finally got to see them.

I've run out of time to talk about them, but there's some video here and here; and a note, the sound at the PNE Forum is way better from further back. Trivially, I have seen Amon Amarth three times now, but this was the first time I was able to stay to the end!

All photos by Allan MacInnis, needless to say. Rock on. 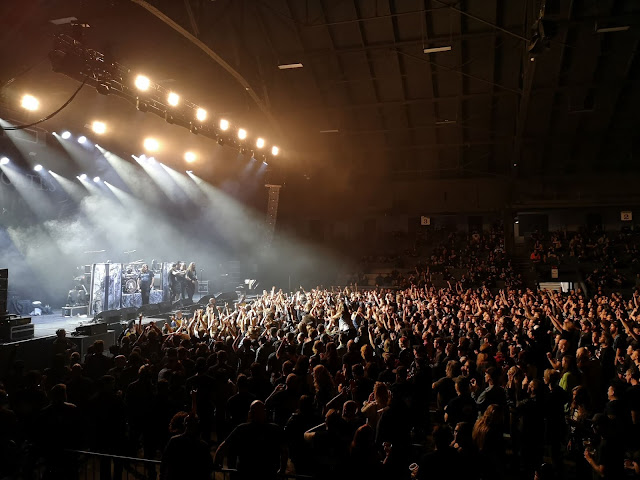 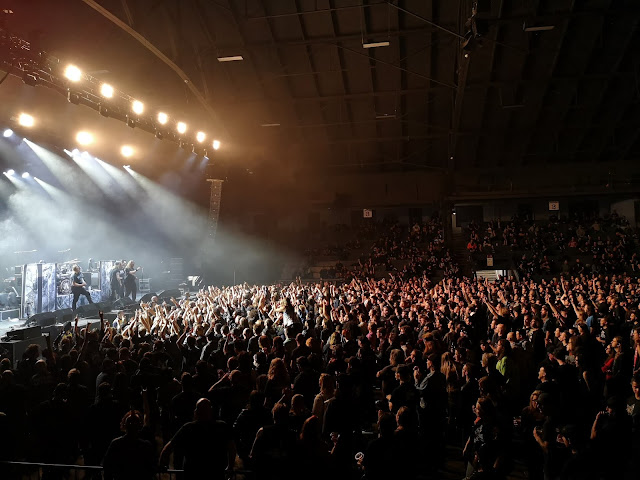 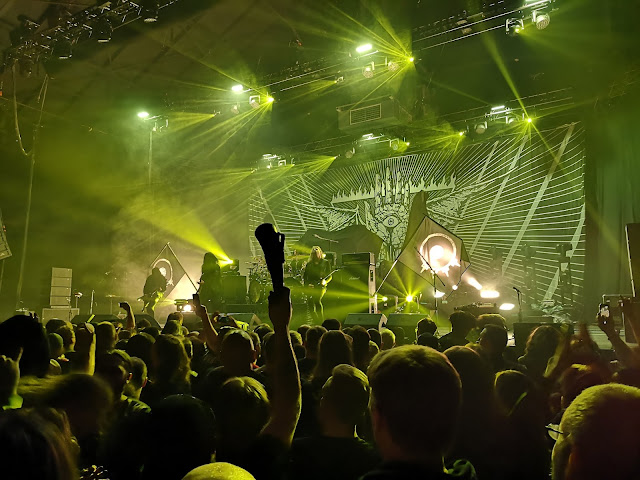 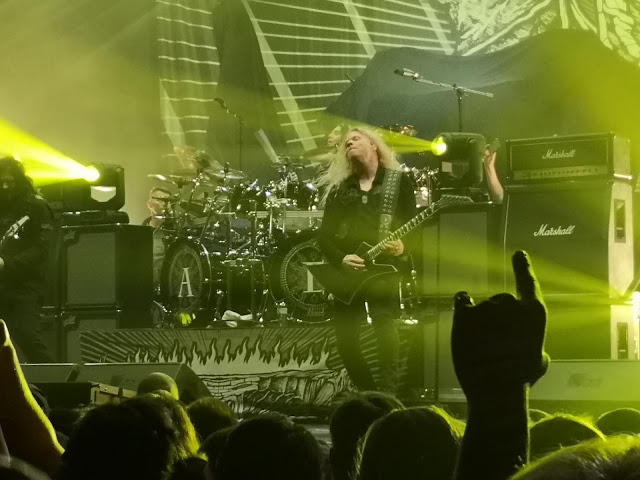 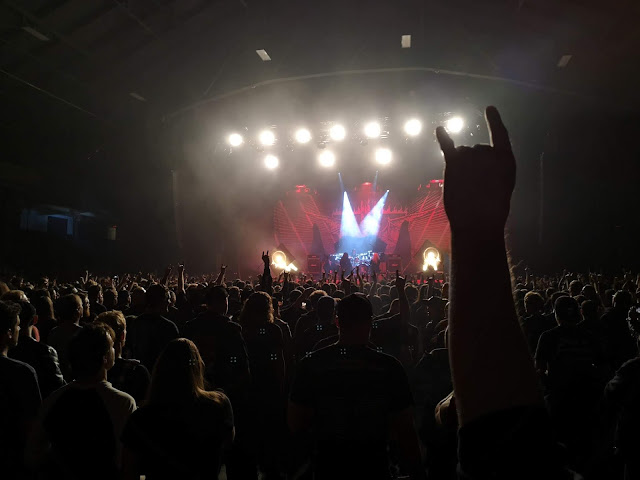 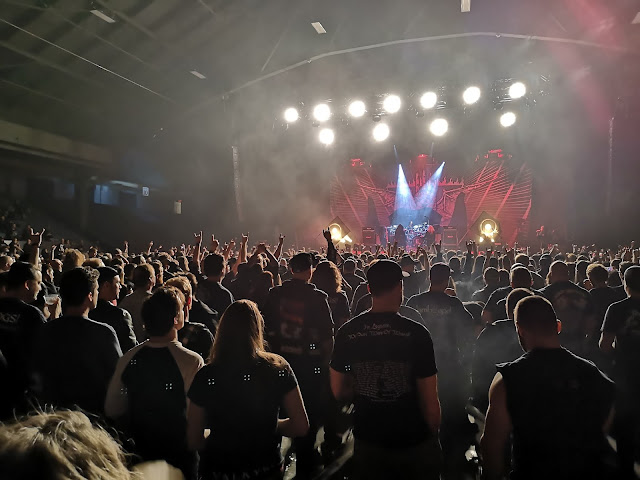 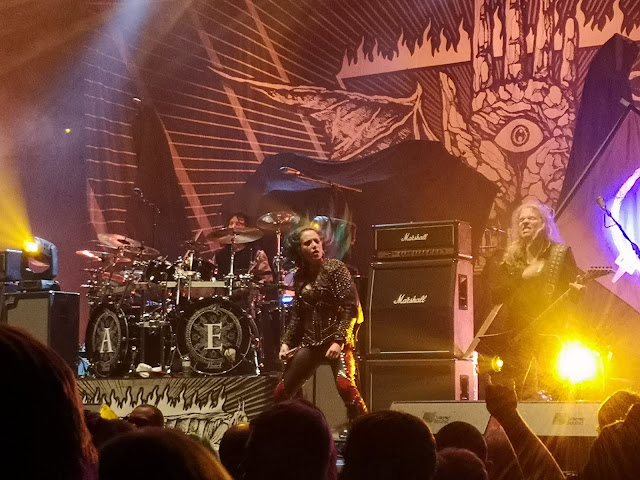 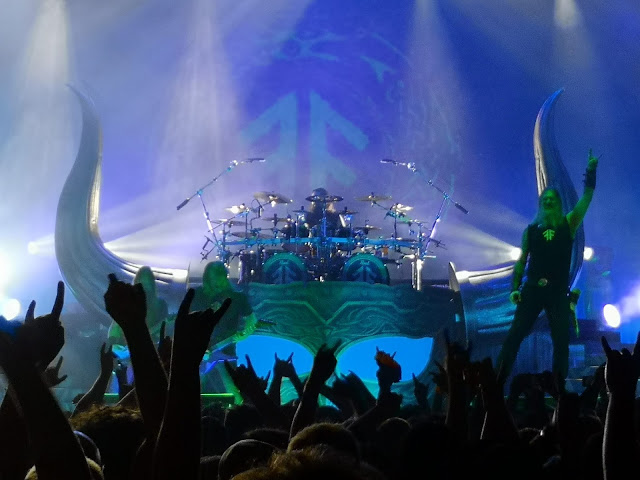 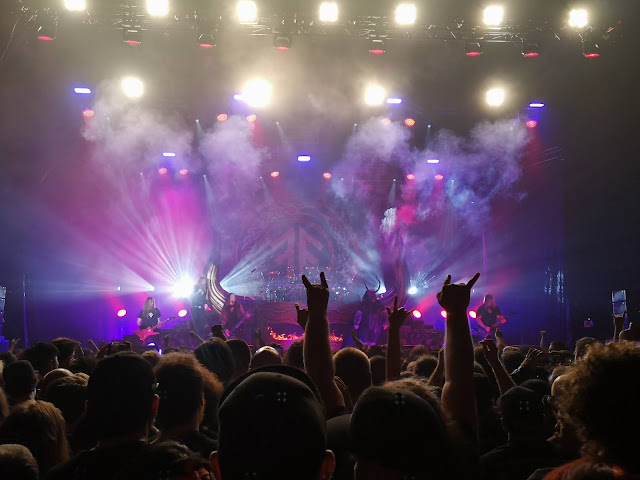 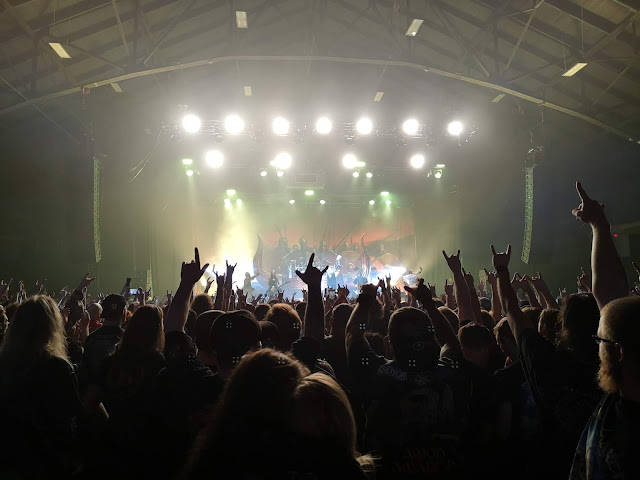 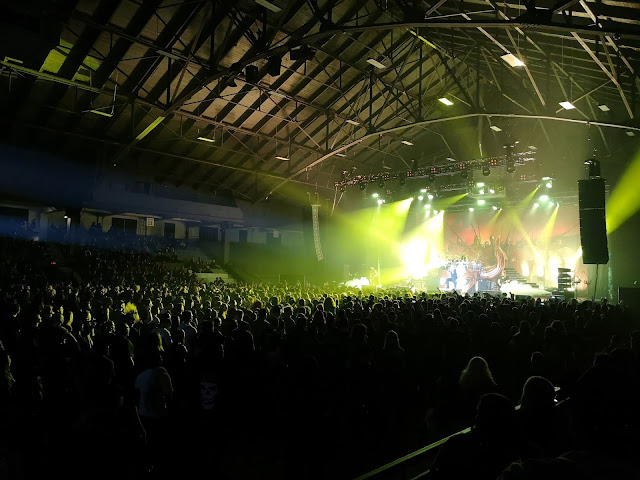 Oh: at one point, Hegg told the crowd - before "Raise Your Horns," during which he drank deeply from a Viking drinking horn kept on his hip - to raise their horns whether they had a beer or not. You can imagine the response. Really fun, with plenty of tunes from Twilight of the Thunder God, which was where I first noticed them. 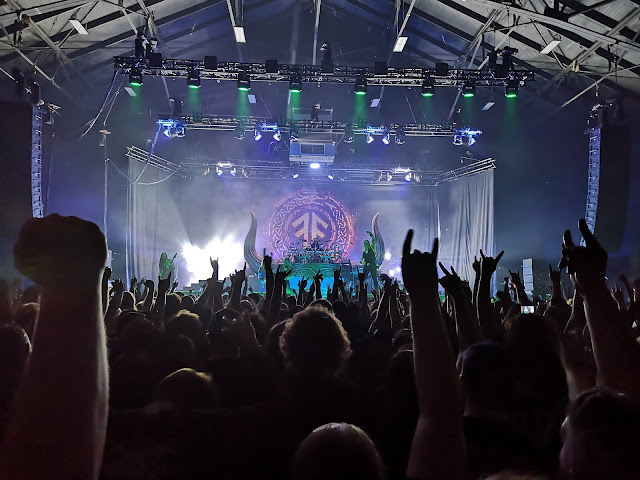 Posted by Allan MacInnis at 9:11 AM