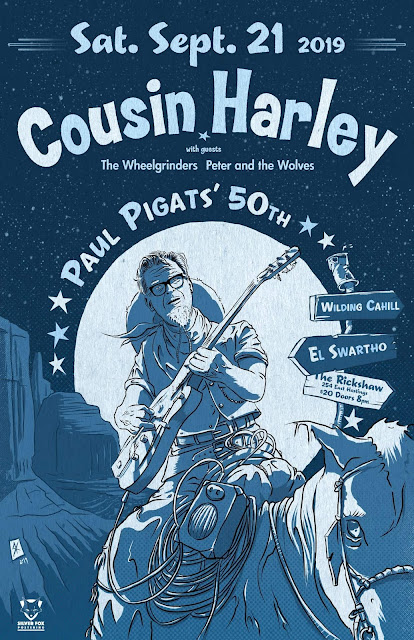 I think it is wonderful that you are sharing your birthday event with Vancouver, and hope you have a successful show. I'm sure it will be massively entertaining. I have plugged it a few times, in a few different places, and am sure I would really enjoy it were I to, um, be there, which (sorry), I won't be.

The thing is, I haven't seen a full DOA show in about six years. Think the last DOA concert I was at til the end was one of their farewell shows at the Rickshaw - what was that, 2013? It was before Todd Serious died, because the Rebel Spell opened; Brian Goble was still alive, too (and Randy Rampage and Brad Kent, tho' I don't know if Brad was there). I checked in at one show at the Rickshaw a couple of years ago just to see the new lineup, but I had to get home for some reason or other and only saw about half the set. I have seen half-sets or so a couple of other times since 2013, too, but it was sorta "show Erika DOA before they call it quits (in Victoria, a few months after the Vancouver gig), but let her get home before she gets too restless, because this isn't really her kinda music," you know? (She likes your stuff a lot more!).

Then the Fight Back Festival came and I went for my friend David M.'s set and to see Jesse Lebourdais (and get a CD off him), but I hadda be awake to get to work at some ungodly hour out in Surrey the next day (I was teaching a Saturday morning ESL class) and DOA wasn't going on until one, so although I was there, I had to leave before Joe even took the stage. A bummer!

I have been craving a DOA show since. I've been enjoying 1978, and I've actually been taking more of a liking to Joe, who I've come to realize is actually a pretty smart and able guy, whom - nevermind interviewing - I've now had the pleasure, finally, of actually VOTING FOR. (He ran in my riding). And, you know, I wanna see Chain Whip again - I've done recent pieces on both these bands, and I'm just... PRIMED, you know? I can be at no other show tomorrow night. And I NEED a punk show this weekend, I really do!

...But dude, happy 50th birthday! (May I recommend watching John Cassavetes' Husbands if you haven't seen it? I can think of no better movie to celebrate turning 50 with; I would have done it myself a couple of years ago except I had already used it to celebrate my 40th). No doubt I will write about you again some time, and I definitely intend to see you play again sometime (soon!), and I'll bring Erika, and we'll both stay to the end and have a great time. Prolly not as great a time as it's going to be tomorrow night, given the occasion, but, you know, we've never NOT loved one of your shows, so we'll live.

PS: for anyone reading this OTHER than Paul (and company), who is looking for a fun show to go to tomorrow night (technically tonight), and who DOESN'T feel like seeing DOA, may I suggest Paul's birthday bash with Cousin Harley tomorrow? I think it really doesn't matter if you like roots and rockabilly as your primary thing or if you like punk and metal: if you like guitar, YOU WILL BE ENTERTAINED.
Posted by Allan MacInnis at 12:51 AM