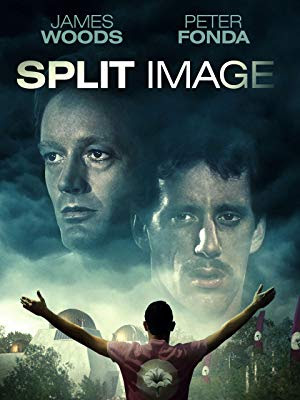 Kind of crazy that Split Image isn't available on Blu-Ray. It's one of Ted Kotcheff's most interesting accomplishments, up there with Wake in Fright and First Blood, and it's one of the reasons I am impressed, so far, with the films offered by Amazon Prime, since it's a film I never expected to find there. I'm still not so big a fan of streaming that I wouldn't rather have a physical copy of the film, but it was only ever released on home media, as far as I know, on VHS tape; there is a DVD of it sold on eBay but I suspect it's a bootleg of some sort - probably a VHS rip, since the art is identical to one of the past VHS releases of the film. That's not the case with the Amazon Prime version, which is a high-def widescreen presentation (which is not the case with all their films, note; I was briefly excited to see they had Night Creature, a British horror film with Donald Pleasence as a hunter battling a big cat, because the public domain DVD is unwatchable, only to discover that the version on Prime is just another version of that same crappy-quality vid. On the other hand, their Creature from Black Lake appears to be a big improvement on the public domain versions of that film, so you kinda gotta go case-by-case with them). 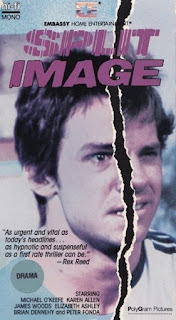 Anyhow... the thing that's most interesting about Split Image is that it sheds a light on a phenomenon that has gone, somewhat, out of vogue: cult deprogramming, which itself is based on a premise that is equally out of vogue, the idea of mind control/ brainwashing. (These are Wikipedia links, folks, but have some interesting information and external links for further research if you want; they seem fairly well-written and informative pages, actually). The film purports to show a young man (played by Michael O'Keefe, a terrific actor who is still around, but who I don't recall having had many roles to equal this one) being manipulated, somewhat less-than-believably, into joining a cult. Kotcheff presents some elements of the process in a way that seem quite plausible - how he gets sucked in by a pretty girl, for example - likeably and believably played by Karen Allen, of Raiders of the Lost Ark fame - and sets out for what he thinks is a harmless weekend trip, from which he ends up not returning (until he is kidnapped by deprogrammers, that is). He's always portrayed as a critically-minded, irreverant, perceptive young man, so the latter phases of the transformation, where he appears to eventually just let go of his cfaculties and become a robotic, wide-eyed flower-seller, get a bit harder to buy into; I wonder if Ticket to Heaven - the other great "cult indoctrination" film of the 1980's - is equally hard to swallow, now? (By the by, that's a Youtube link to the full film). 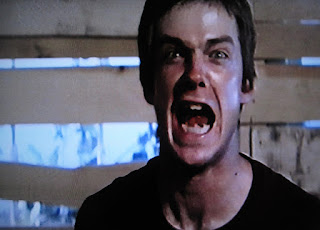 ... but returning to Split Image: James Woods - who I'm guessing is inspired by Ted Patrick, though he's the wrong colour - plays the deprogrammer in the film, with all the sleazy, sweaty vitality of Woods at his peak; its maybe my favourite role of his. He's hired by the kid's parents (played by Brian Dennehy and Elizabeth Ashley) to "break" the grip that the cult leader (Peter Fonda!) has on their son. Some of the film is really interesting - like the rather confrontational, somewhat unexpected critique Woods offers of the spiritual bankruptcy of the average American family, which is what, he says, let the boy fall victim to the religious movement in the film; there's a lot of angry finger-pointing in the film, and some of it is at the kid's parents... But some of it has aged poorly, albeit in interesting ways. The film really, really works the idea, for example, that there is some sort of almost unnatural hold of Fonda's character on the cult members, but that it can be broken with the right sort of techniques. These are the same ideas that eventually, in the real world, led to actual deprogrammers like Patrick getting arrested and sued, and which led to the movement of deprogramming kind of fading away (which may help explain why films as interesting as Split Image and Ticket to Heaven have all but disappeared from public view; they're based in concepts now considered discredited).

The thing is, if the idea of cult deprogramming is based in a too-simple, 1980's view of "mind control," that doesn't mean that more malign religious movements out there don't have a creepy, weird hold on their members. (I won't bother pointing fingers, but examples are easy enough to come by). It just probably isn't as simple as the picture painted by films like Split Image, and probably does involve a lot more complicity on the part of those who have been "brainwashed." My understanding of the whole idea of "brainwashing" is that it arose in part as an excuse/ defense for confessing US troops captured by Communists - to say nothing of Patty Hearst; they weren't responsible for what they were doing, because someone else was in control of their minds; I don't think real life cult members will find themselves so easy to absolve, which probably makes real life "exit counselling" a far more complex and challenging thing than what we see Woods doing in this film. This, oddly, is where the film is most interesting, in what it reveals about how we thought of these issues back then; the thing that has aged most poorly about the movie is the thing that kinda makes it worth seeing now.

(Though James Woods is pretty damn fun in this, too). 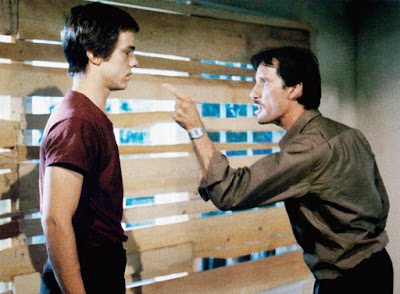 I'm working full-time these days, so I may not be writing as much as I had been for awhile there (you will not likely see a review of Creature from Black Lake, for example, a silly bigfoot film that remains a true guilty-pleasure of my childhood that I am keen to revisit ASAP in a nice transfer. I will even spare my wife this film). But incidentally, while I have the attention of maybe a dozen people (!), two of the best under-the-radar local punk bands, storc and Invasives, are opening a just-announced show at CBDB's on Friday (it had been announced at short notice for the Rickshaw but has been changed). If you haven't seen Invasives, they're kind of the unofficial heirs of Nomeansno (while sounding little like them).
Posted by Allan MacInnis at 7:12 AM

By the way, an interesting contemporary take on brainwashing and door-to-door solicitation:

Turns out Creature from Black Lake is pretty pink and there are scratches and other artifacts.Still better than what is on Youtube, with the right aspect ratio and an entertaining, rather innocent story (much more wholesome than Shriek of the Mutilated, also on Prime). Jack Elam and Dub Taylor have small roles but top billing (because relative to the rest of the film they have star power!). I have always enjoyed Dennis Fimple (as Pahoo), myself.